With EMS getting more customers than the judges, Lion Fight XXIV was both an indictment of Pied Piper formulaic match making and an inspiration to Destiny’s Children. Out of five featured pro fights, two made it to the judges. One shouldn’t have gone there but still ended in the ER for stitches.

Commencing his rehabilitation from a Glory World Series product life cycle long day’s journey into night, Ky Hollenback took a nasty gash on his left eye brow. With seconds to go in the fourth, the doc gave him a temporary reprieve only because his corner man Kirian Fitzgibbons is one of the best cut men in the business. Off fifth bell, though, Richard Abraham jumped all over the cut.

Up until then, it had been pretty much all Ky. When the doc stopped it, Kirian cased the bleeder purposefully for an accidental head butt. There was no objection from either the ref or the other corner. So they went to the score cards. Hollenbeck was ahead on all of them, which gave him a UD.

Only the still photos tell a different story. Kirian’s “accidental head butt” looks more like Richard Abraham’s elbow. Score this one for Master Toddy’s worthy successor. Kirian Fitzgibbons played a wild card to snatch victory from the jaws of defeat.

You think savvy corner men don’t make a difference? Ask Ky Hollenbeck, who joked with me afterwards that he always seems to get cut, when I’m covering him. No joke. That’s because I’m only there when he does Muay Thai. Although the money could be better, Muay Thai rules.

The sports beat’s pay scale itself descends to pro bono for two thumbs and a smart phone. So it was that a youthful tweeter enthused: “I am so excited! This is my first time.”

Figuring the hottest place in hell is reserved for those who remain neutral in a moral crisis, I explained to MMA trending on Facebook the incongruence with Muay Thai in posturing │ spacing │ carrying the guard │ and how grounding effectively forecloses clinching, which is the pivot for Muay Thai knees and elbows. (See “The Principles of Unarmed Combat” by Mark Jacobs, ©2011, published by Turtle Press) Mix apples and oranges in a blender, in other words, you get the best of neither. Whether or not the rookie reporter got it, for all I know he might’ve been tweeting “there’s this really annoying old guy here”.

When Kevin Ross escorted Gaston Bolanos to the ring, I pointed him out. Are you ready for this? Youthful media in search of a message asked “who’s that?” So I showed him a copy of Muay Thaimes® with Sittisuk Por Sirichai carving up Kevin on the cover. He looked, glanced at Ross, turned back to me and blurted. “That’s him!” Then he got to see the good stuff. If Lion Fight XXIV sold joy stick journalism on full rules Muay Thai, who am I to judge?

Ben Yelle came like he’d been comp’d to play the title role in a production of “Catcher in the Rye”. You’ve probably heard it said that the best defense is a good offense. Well Ben brought neither. It’s not like anyone in the house couldn’t hear the masterful stage directions that Kirian was giving his newest hot prospect. Having satisfied both of themselves that Ben’s deer in the headlights was ripe for road kill, it took only five minutes and four seconds for Gaston Bolanos to stomp the comp with a reverse spinning elbow (Sok Wiang Klap).

Featuring seasoned veterans like Ben Yelle and Ky Hollenback against hot prospects like Gaston Bolanos and Richard Abraham defies Pied Piper formulaic match making. It is formulaic for so many shows around the country to wire locals into closed circuits around the shape of a box office. Closed circuitry conceals a Pied Piper, though, in the enchantment of local celebrity. Whether any prospect’s career sizzles or fizzles depends wholly upon how much voltage juices the circuitry it’s plugged into. We measure voltage on the fight circuit by the caliber of competition. 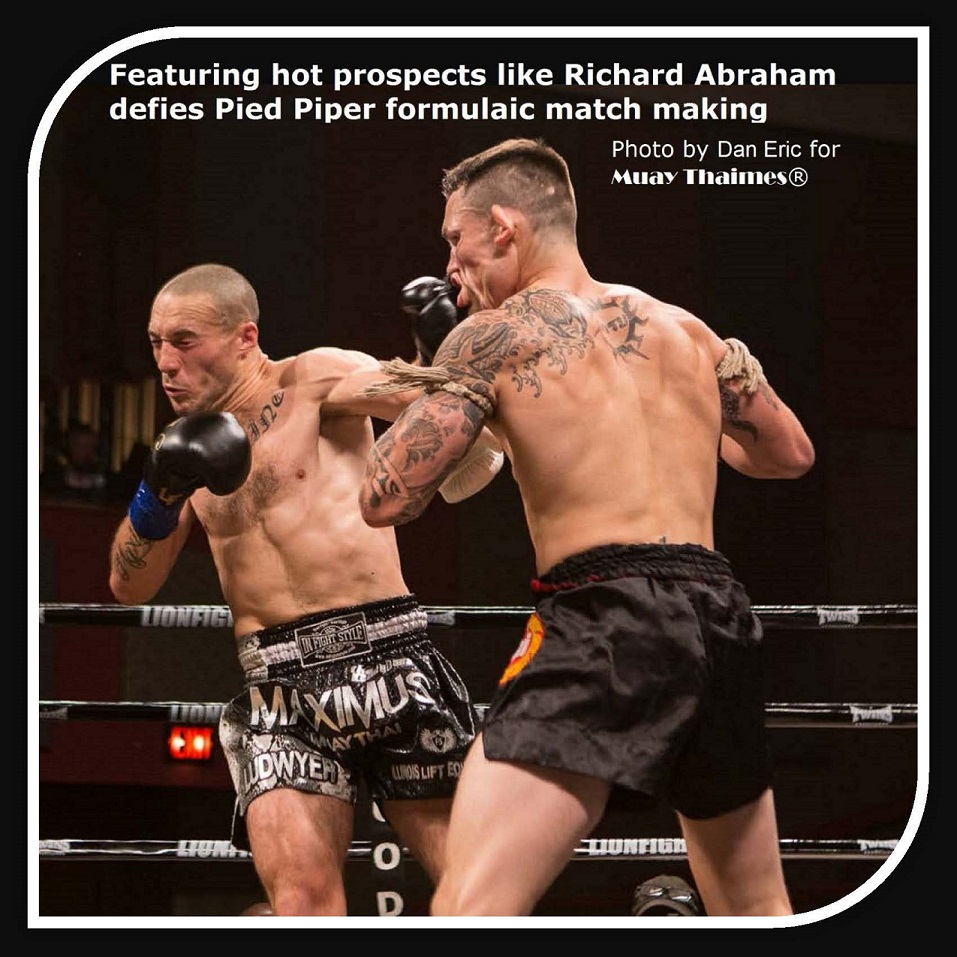 No one had ever come out of NYC’s local circuit, for example, with a better pro record than Chris Mauceri at 8-0-0 with 4 by KO. Yet Chris was obviously no match for Kevin Ross (TKO @0:21 of Round 3) in his Lion Fight debut. When Phanuwat ‘Coke’ Chunhawat left his heart in San Francisco – virtually conceding a UD to Chris – it was a kind of Deflate Gate to take some of the air out what otherwise would’ve been seen as an upset win’s sails. Then came Sittisuk Por Sirichai, who wielded the same butcher knife predictably with Chris that he’d used to carve up Kevin Ross. So it was that Nicholas Parlanti became the crucible for Chris to reveal what, if anything, he’s learned from “Beasts of the Southern Wild”.

At the risk of seeming subjective [moi?] Chris has never looked better. He was smooth, confident and fully in command. Try translating that into 10-9 on a score card. Picture instead the 3rd Cavalry Regiment on the road to Baghdad with the infantry gobbling up territory and great balls of fire from the artillery.

When Parlanti got clumsy with a trick, Chris showed him what it means here to finish with a walk off. NYC locals might remember how Sammy “The Bull” Gravano also crushed skulls like this. Only he was partial to a baseball bat. Either way, it was like dropping a pair of concrete shoes in the East River off the Brooklyn docks. Get the picture? 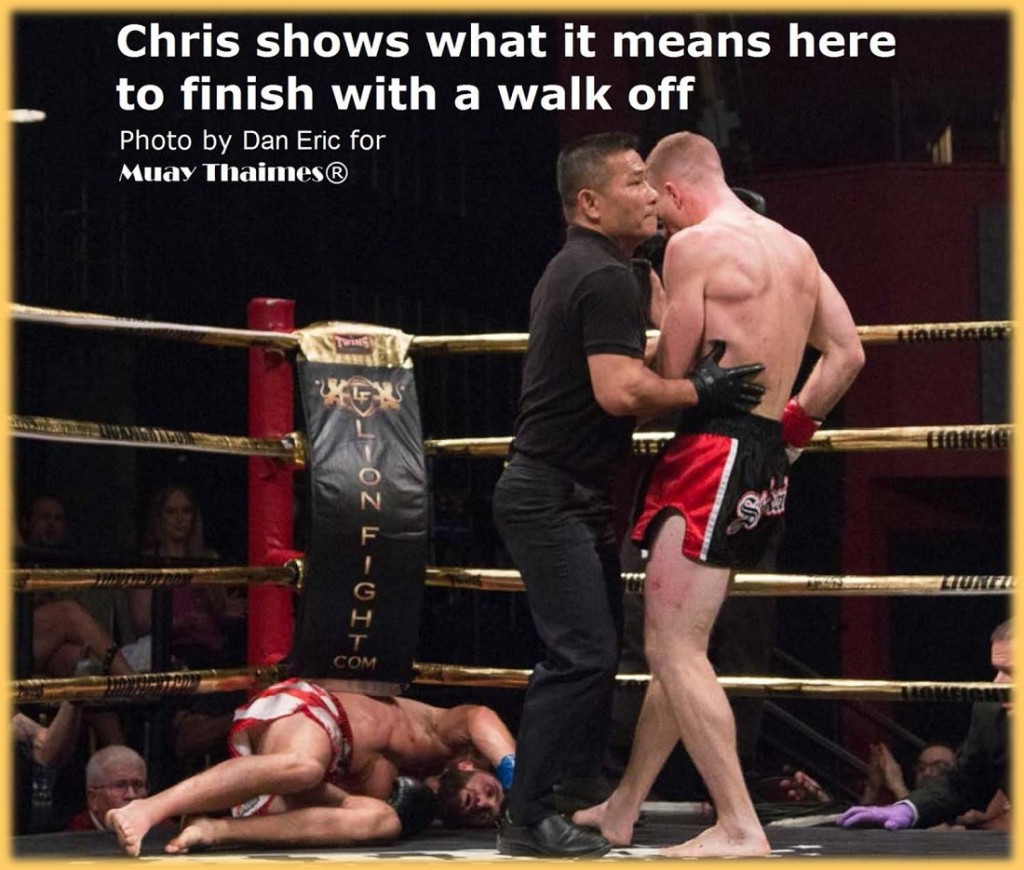 Since taking a beating from Cosmo Alexandre at his own Lion Fight debut, Jo Nattawut has caught on fire. Credit artful match making for also feeding this flame. So it was that Richard Abraham – whose status in this showcase seems to be somewhere between a rock and a hard place – was then auditioned for supporting actor in “Bonfire of the Vanities”.

Together again in the same house, you already know that Ky Hollenbeck was also there. Whether Khunpon’s protégé wants a piece of Yodsænklai Fairtex to settle a score for their homie Chike Lindsay-Ajuda, Richard Abraham is just an engraver of tomb stones. Yodsænklai Fairtex is the cemetery, where truth meets consequences. All the belts that money can buy, by the same token, don’t take Ky Hollenbeck out of the middleweight mix. First “Smoking” Jo had to get past Charlie Peters, who’d apparently earned his title shot – by virtue of the above referenced artful match making – with a UD loss to Hakeem Dawodu in Calgary on January 24, 2015.

With so many elbow KO’s, I figured there might never be a better show to go native in the next day’s Quick Results. Wouldn’t you know I got immediate blowback for calling the one that did it for Jo a Sok Klap Khu (Double Elbow Chop)? Kru Mark Nardone cased it for a Sok Wiang Klap (Reverse Horizontal Elbow). Having done this job long enough to know that light doesn’t go through solid objects – like a ref’s butt – ask Kru Mark whether I didn’t report back pronto that we’d both got it wrong. The still photos show a Sok Tong (Downward Smashing 12/6 Elbow).

How do you say “DQ” in Thai? (See “Fouls” on page 28 in the Association of Boxing Commissions Unified Rules and Guidelines Report for Muay Thai) Between Thai refs and fighters, apparently you don’t.

Ognjen Topić’s pro/am record of 25-14-2 with 8 by KO confronts the grim alternative to upward mobility on a prize fighter’s career ladder. Neither does our WBC U.S. national title holder want for a LinkedIn password to connect with Stephen Meleady. On his way to a Lumpini ranking, the Irish scrapper put a pause in Ognjen’s cause at Asawandam Stadium on June 18, 2010. 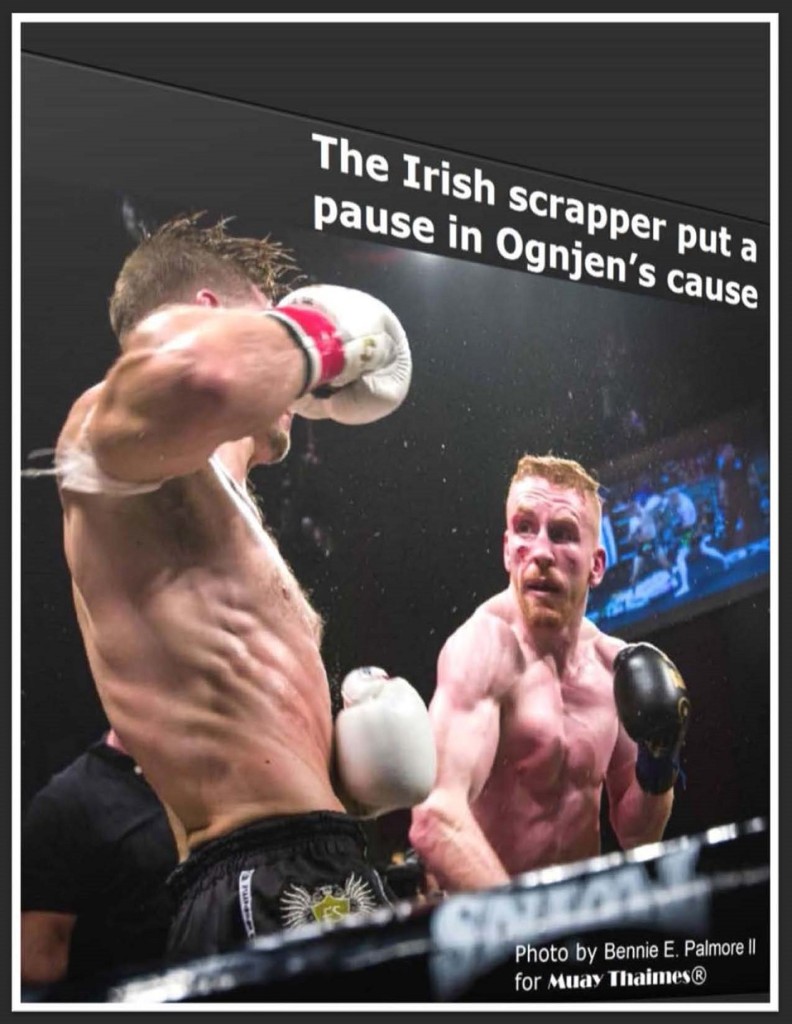 Artful match making [without the sarcasm]: Meleady and Topić are WBC world ranked #13 and #14 respectively. (CLICK HERE for the WBC’s world rankings.) Flipping a Rungravee Sasiprapa coin, by the same token, Ognjen recently came up heads two years after Stephen’s tails. This match is about to test the relevance of quarterly earnings to a stock’s long term growth potential.

Stephen Meleady believes, rightfully so, that Thai ring supremacy is most manifest in the clinch. He also comes prepared, understandably, to pick it up with the New Jersey local where they’d left off. Five years back to the future, Ognjen Topić means to bring a game changer’s worth of malady to Stephen’s Meleady.

Having covered Ognjen pretty much since his ring debut, he’s never struck me as being especially ardent about the clinch. The game changer came with his turning the tables on “Love’s Labor Lost”. Imagine a Denial of Service (DoS) attack that went around and got inside Stephen’s firewall. It was so ferocious that the ruddy Irishman looked like a boiled New England lobster midway through the match. 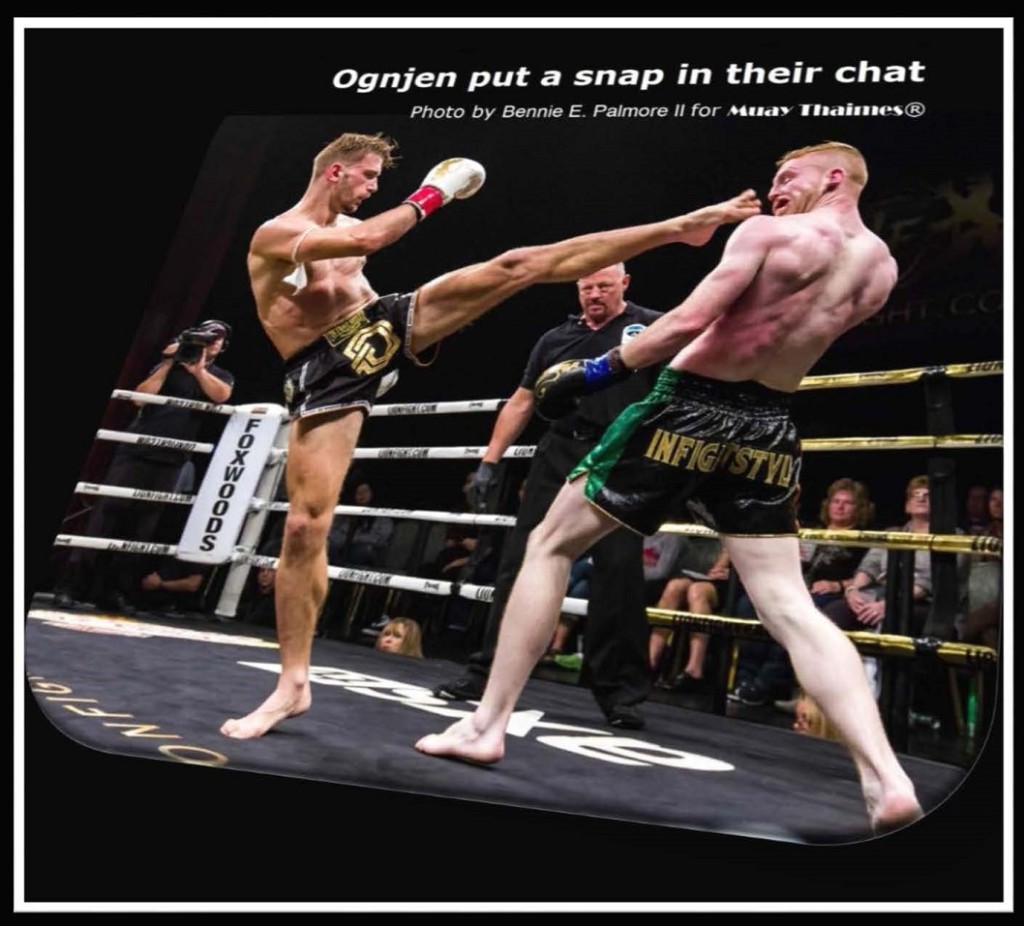 Meleady’s best round was the third, when he managed to get his claws into the stew. Topić went surf and turf with a drum stick upside the head. It transitioned from hoof to mouth, then, with the game Gaelic eating a mouthful of leather.

If this was the only round that Stephen was awarded on one of the scorecards, “there is a tide in the affairs of men which, taken at the flood, leads on to fortune”. With punches in bunches off the ropes in the fourth, Ognjen put a snap in their chat. Although Dublin’s soldier of fortune managed to keep his head above water, let’s just say that surviving a flood of misfortune isn’t exactly the kind of ring supremacy Thais manifest in the clinch.

Round five saw this generation’s best pound-for-pound American putting on a performance like Pavarotti at La Scala. Your warranty against hyperbole is the caliber of his competition, speaking of whom the AXS-TV audience probably didn’t notice a handful of fans off the neutral corner who’d come all the way from Dublin. In all of my years covering our sport, only Christine Toledo ever brought this kind of following with her on the road. With the understatement that none of these lads would’ve been mistaken for designated drivers, neither is there another ethnicity on the entire planet that subdues adversity more cheerfully than the Irish soul.

Ognjen Topic’s climb up the career ladder now takes him to uncharted territory for any American with ambitions beyond an occasional quickie on the tourist circuit. For Lion Fight’s CEO Scott Kent, this milestone has to be inspiring as it’s been perspiring. Upon first getting started, Scott told me that developing American talent would be his mission. The New Jersey local might still be doing re-matches and rubber matches at the Friday Night Fights in New York City or even worse Wu Lin Feng for WCK if Lion Fight hadn’t given us a league of our own. Mission accomplished. Now let’s take it, like Ognjen Topic, to uncharted territory. 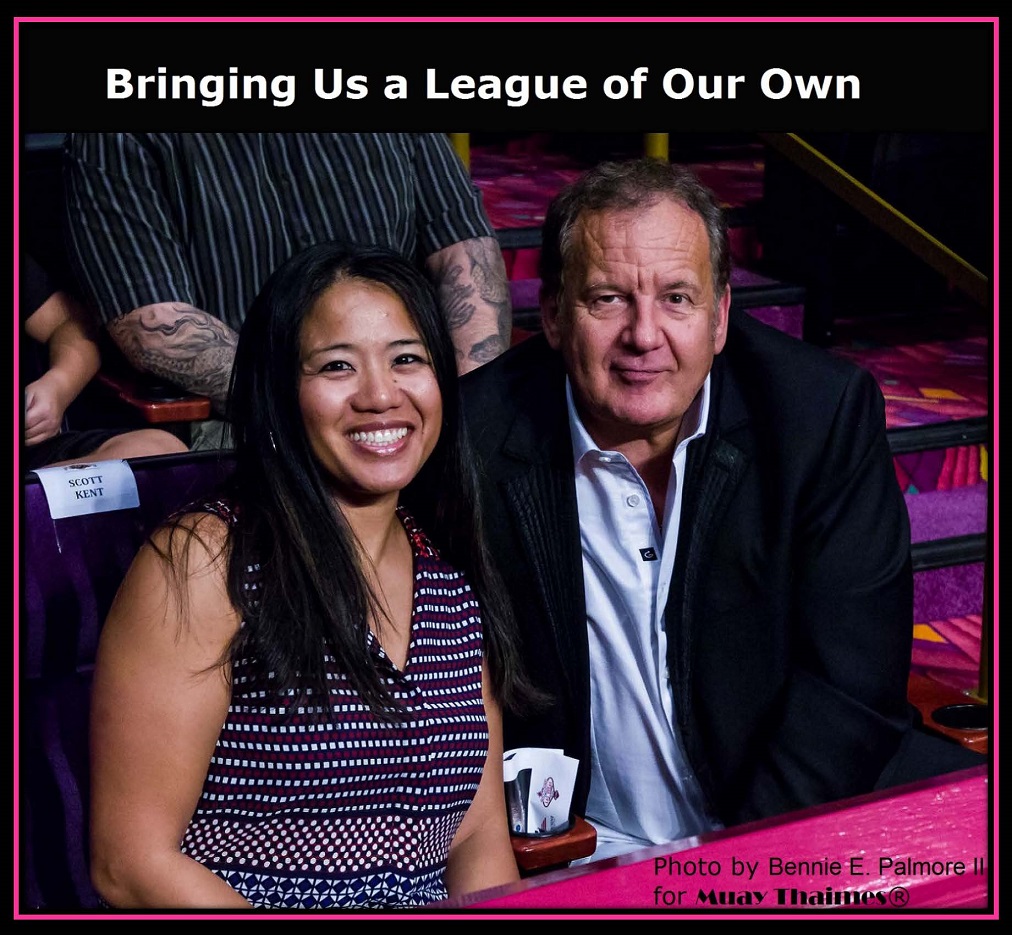