Just in case your search engine’s algorithm defaults to boxing, no one fights his or her way up the rankings in kin sports like ours. That’s because there are no rankings. If you think Glory Sports International (GSI) does rankings, don’t even go there. GSI only ranks fighters under contract. Have you ever seen any ladies in GSI’s shows, who weren’t waving round cards or serving cocktails? 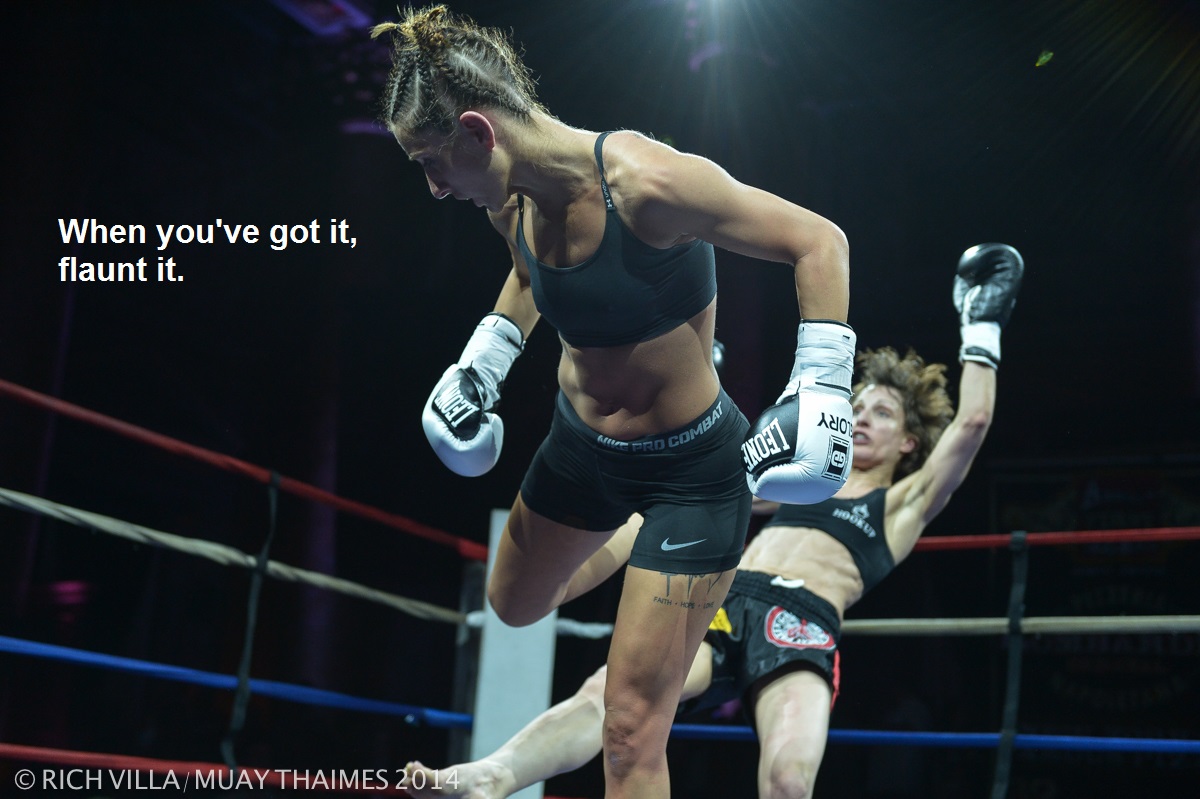 Don’t take my word for it. See “The Fighting Spirit” for a dose of reality. [Full Disclosure: this is an hour long tv show.] Then compare WBC’s ranking of boxers with the Muay Thai division’s flea market for U.S. national titles. The only objective criterion determining who gets to fight for these titles is how many tickets they can sell.

Exactly because there aren’t any rankings is getting noticed ultimately by a gatekeeper – like GSI’s national talent scout – such a big deal for career advancement in our sport. It’s the same deal in mixed martial arts, where the UFC mints coin of the realm.

That’s why 3x world kickboxing champion Lou Neglia measures success by how many of his Ring of Combat headliners have made the leap to UFC stardom. So long as the UFC occupied the only stall in the mall, Combat at the Capitale produced stand-up to mma’s specifications. Just as market incentives shape economic behavior, so also is Combat at the Capitale now standing up to a more GSI compatible profile. 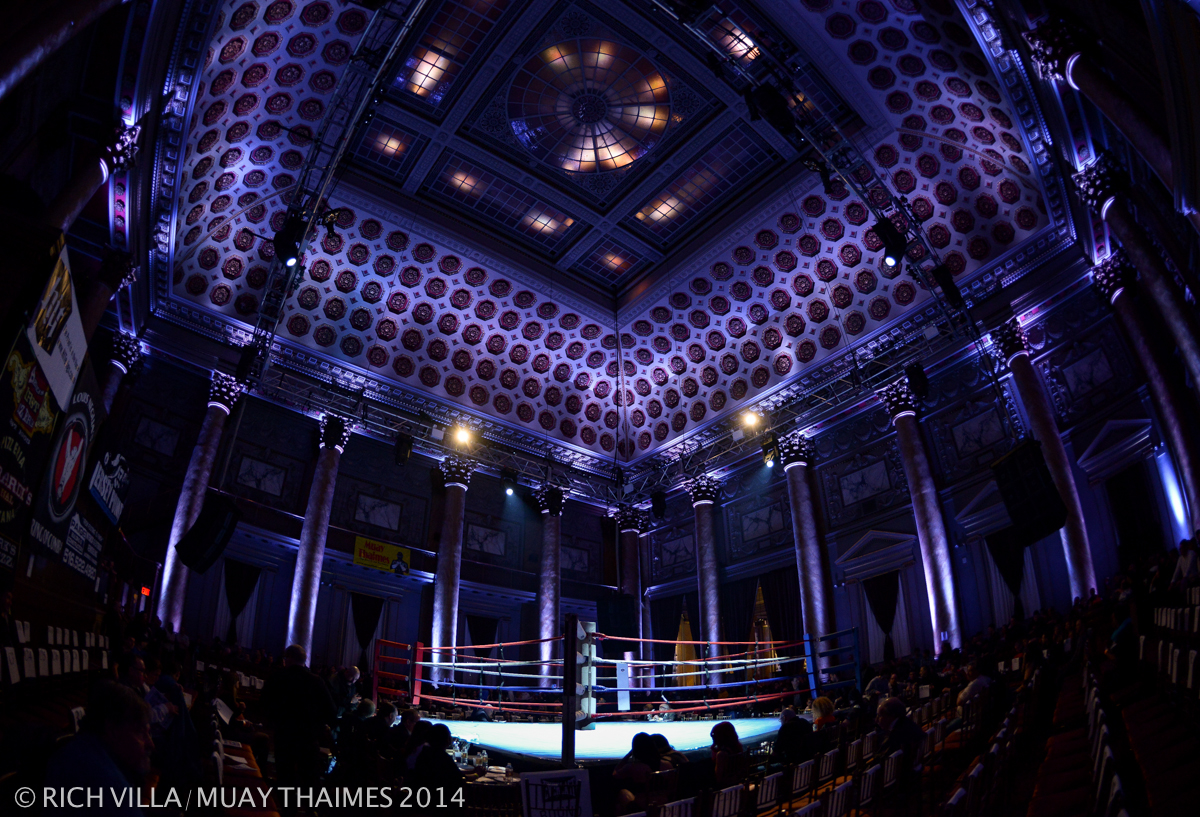 We’re seeing less quantity, for example, and more quality in the matchmaking. Pro purses are now the rule, rather than the exception. You don’t even have to bring a compass to see these shows are going in the direction of career development. Plus they’re making money, which means that Lou has hit on a viable business model.

Appearances can sometimes be deceiving. For all the skin GSI has in the game, let’s call an ace and a spade a spade. This NYC local shows more on his bottom line than all of the sorcery in Singapore. Which business model is more viable?

In the shadow of Wall Street: bulls make money; bears make money; pigs get slaughtered. Hedge fund management is a game for gamblers. Even if the gamblers can afford to lose their bets, they’ll be left with no chips on the table. Better not to bet the bubble. Let’s go to the recap for Combat at the Capitale on June 13, 2014. 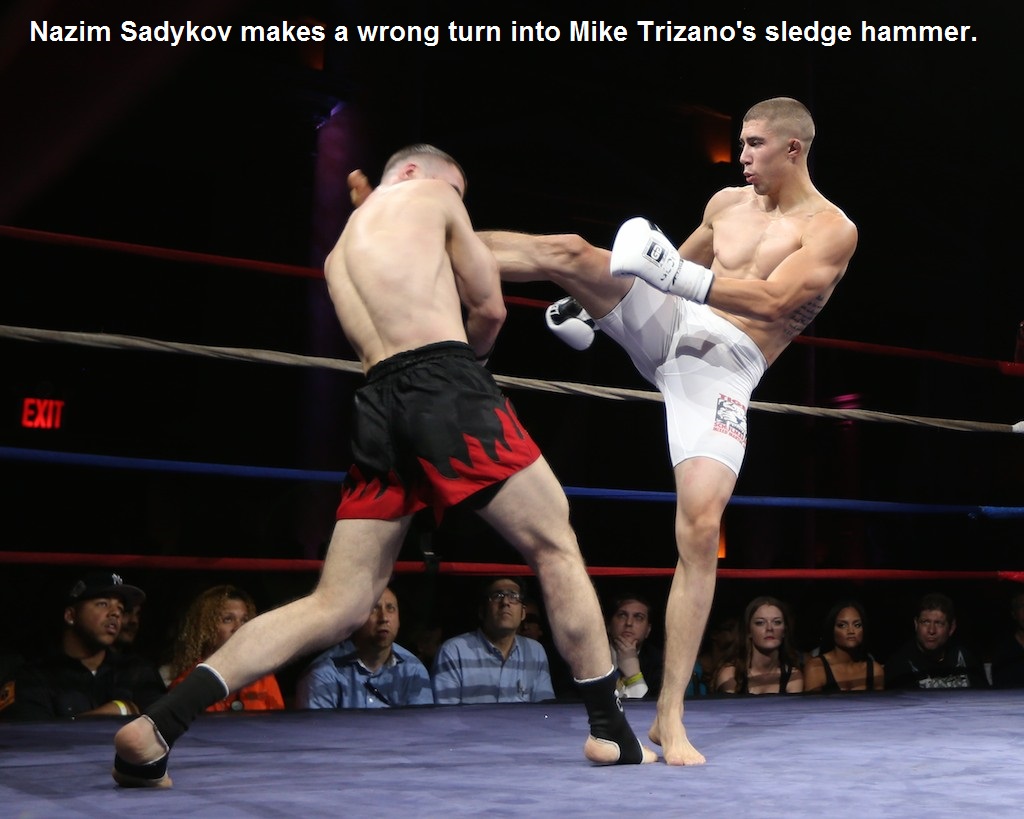 Where the common core standard is “protect yourself at all times”, failure administers its own punishment. Nazim Sadykov’s punishment comes from sloppy execution. With a wrong turn, he goes from a slight edge in Round One to Mike Trizano’s sledge hammer about midway through the match. Mike then proceeds to turn the tide against Sadykov. “Time and tide wait for no man.” The newbie from Team Tiger Schulmann wins going away. 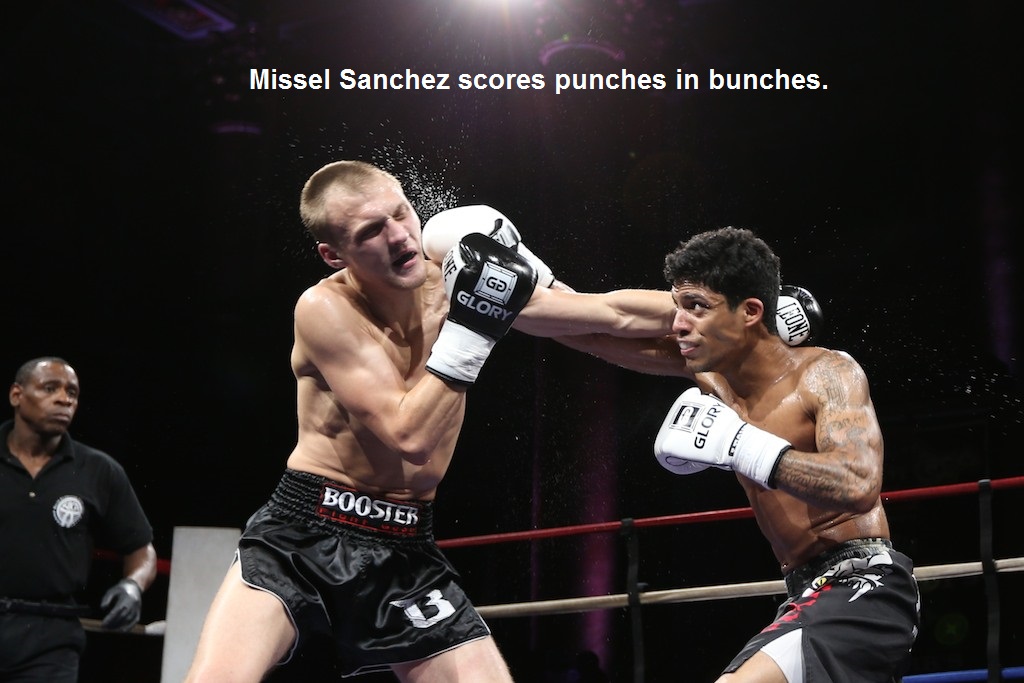 How much sense does it make to judge a teacher’s job performance by test scores? About as much sense as judging Daniel Nelson’s teacher on the score of punches in bunches that land on his chin from Missel’s faster hands. Between nature and nurture, it’s a no brainer. Swifter always beats slower, except in a fairy tale. Missel Sanchez is another newbie from Team Tiger Schulmann, who looks like he might go places.

Southpaw cruiserweight Andrew Ball just brought home a low kick title from the WKA worlds in Italy. Open invitations to WKA’s European tournaments are authentic as we’re going get to a world title in this sport. Never mind ‘amateur’ means un-pedigreed by definition.

European pros also compete in these tournaments. They bottom fish for wardrobe accessories to stroke their obviously superficial egos or maybe to play for some local pay. You can never go wrong following the money. What you can infer from this, though, is that Andrew is pretty damn good.

Back on home turf, Lou Neglia matches Andrew with New Jersey’s James Smith, Jr. for WKA’s Northeast title. Jurisdiction and citizenship both are local for mainstream bragging rights. Glory rules come with so much more brand recognition than low kick, which is basically a transition for full contact kick boxers to either get a life or pull the plug.

Heir to the throne of the B52 dynasty is trained by his Hall of Fame dad, from which you can also infer that he moves with the grooves. Pivoting orthodox off his left foot for a round kick, Smith maintains the classic left guard carriage, with a right hand back sweep for accelerated torque. 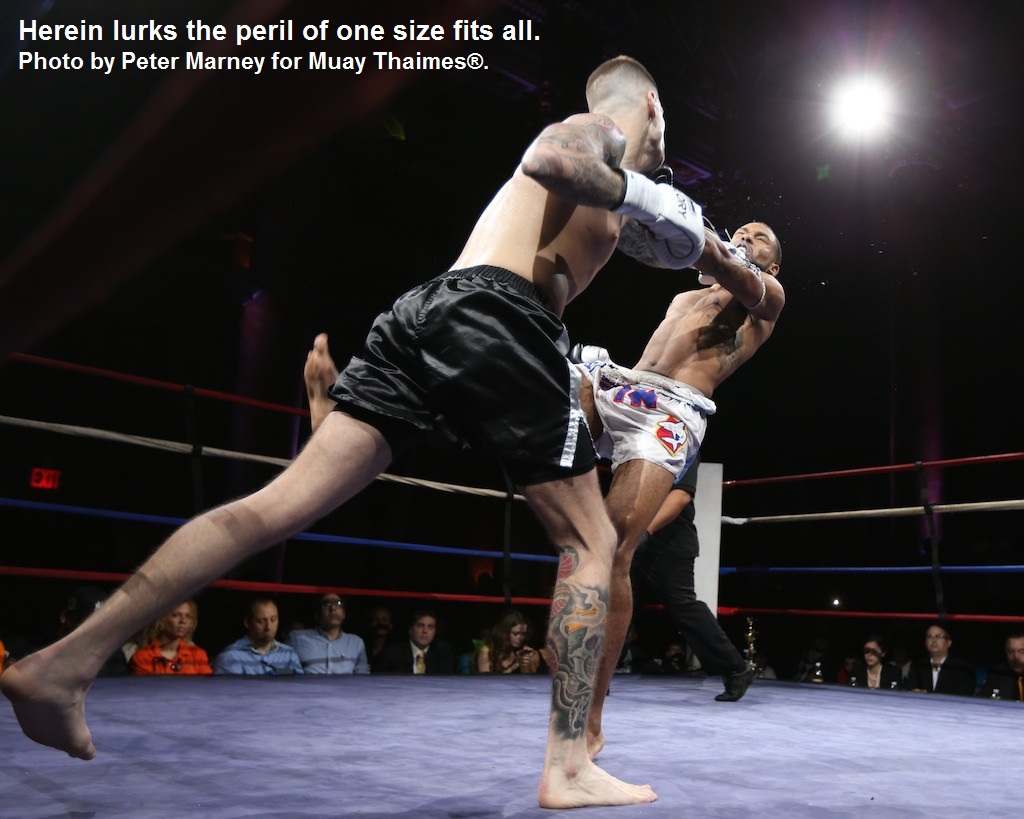 Herein lurks the peril in one size fits all, because Andrew is a southpaw. So James is literally putting all of his strength into a collision with Andrew’s left hook, which clobbers him on the jaw. This is where we get the expression “knock yourself out”. You better believe that Eric Haycraft will eventually pick up Andrew’s blip on his GSI radar. 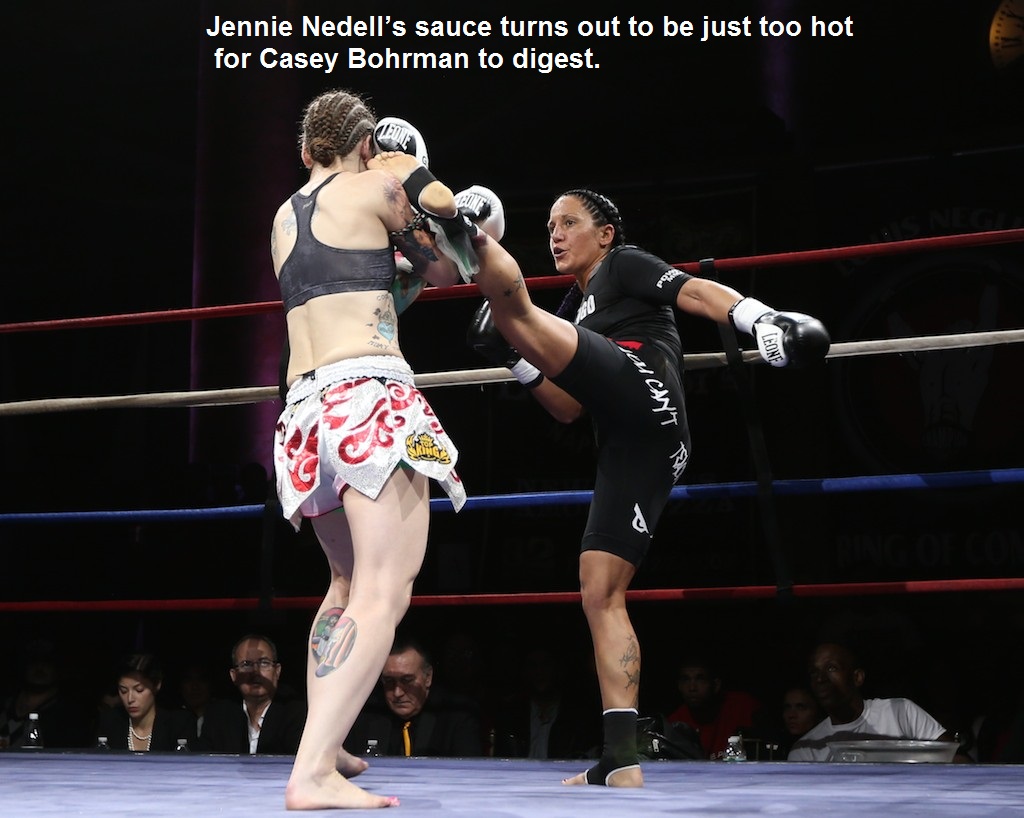 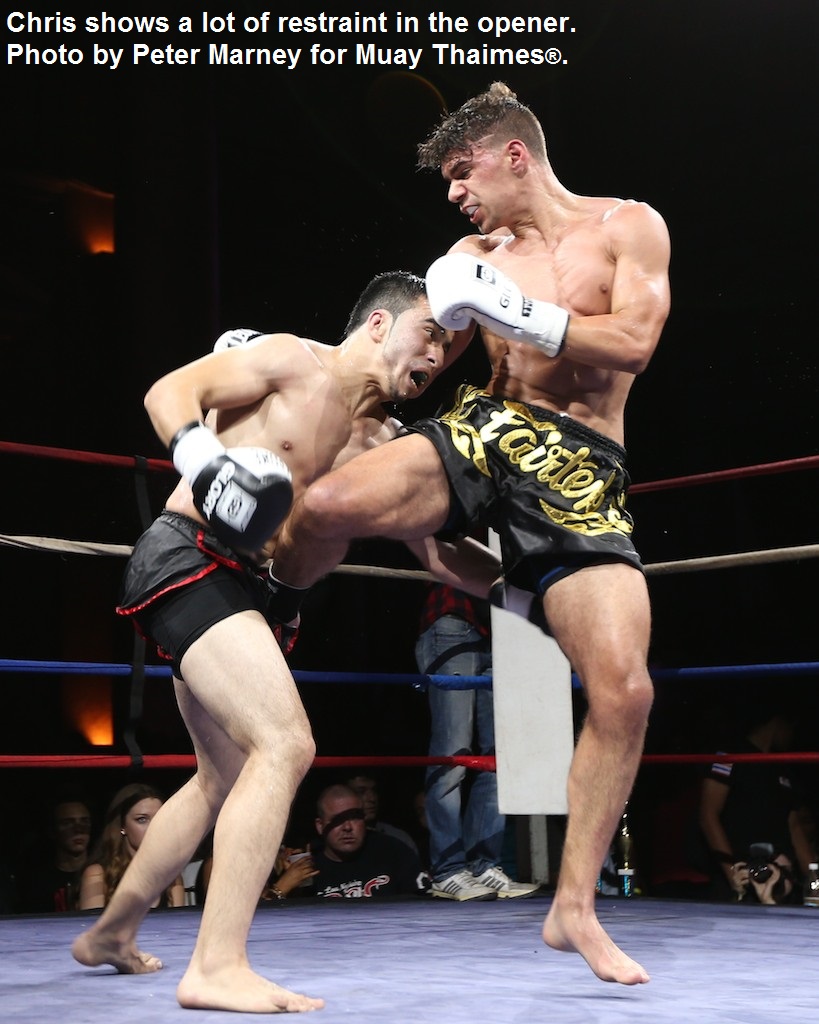 Chris shows a lot of restraint in the opener. He could legitimately dq both of these guys for so much tripping and flipping. Once he settles them down, though, a pattern emerges.

Dom Biondo keeps walking into harm’s way. About midway through the match, he walks into one too many. It earns him a standing eight count, which comes with the obligatory point deduction. You’d expect a pro – who knows something about defense – to beat a brawler. So Zaravkh Abashev takes the full measure of Dom’s throwing all caution to winds. It turns out to be an ill wind that blows Dom Biondo a “Long Day’s Journey Into Night”. 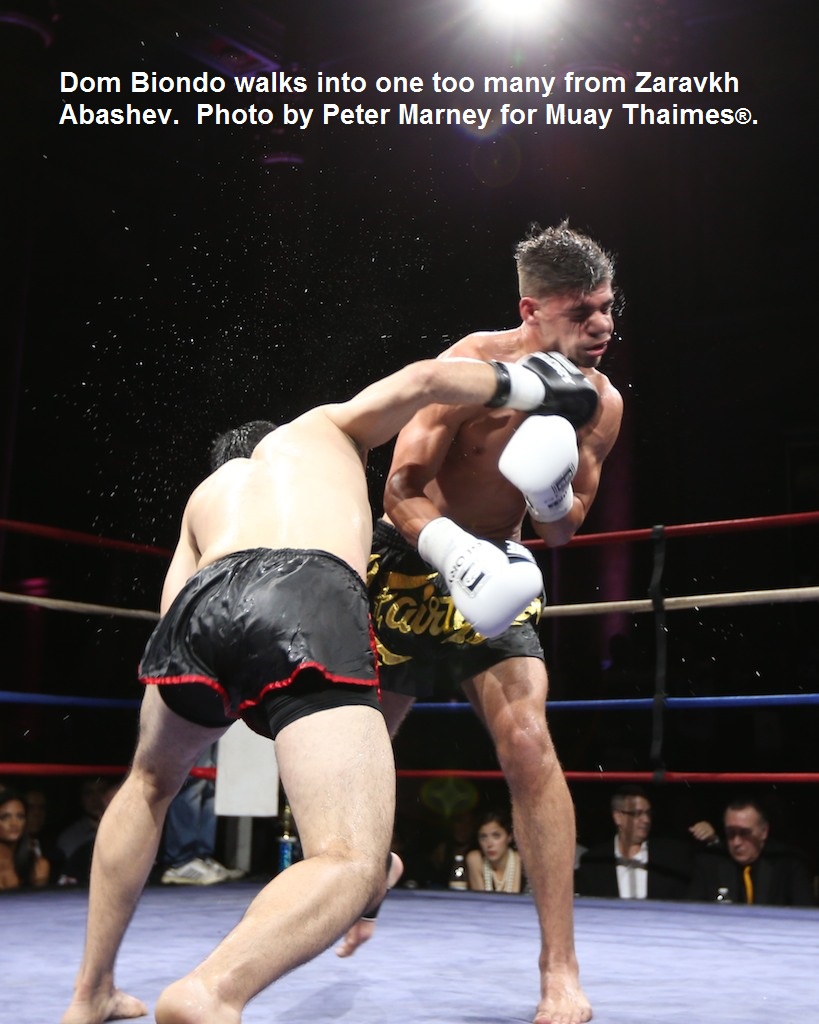 Amongst “Beasts of the Southern Wild”, none still on this planet are more ferocious than the Tasmanian Devil. It is this animal spirit that seems to inhabit Elvis Gashi from first bell.

A left hook flush on his jaw rings Mike Santiago’s bells. Instinct, nature and probably Mike’s corner all tell him to keep his guard up. That leaves the door unlocked downstairs for Gashi to clobber him with knees. Santiago goes down twice – without the TLC that referee “Big” John McCarthy gave Mirko Crocop at Glory 17 in Los Angeles on June the 21st – where it seems kind of transparent which best-selling brands GSI’s corporate hq has endorsed in its WWE business model. See “How to Kill a Sport” by Mark Jacobs. 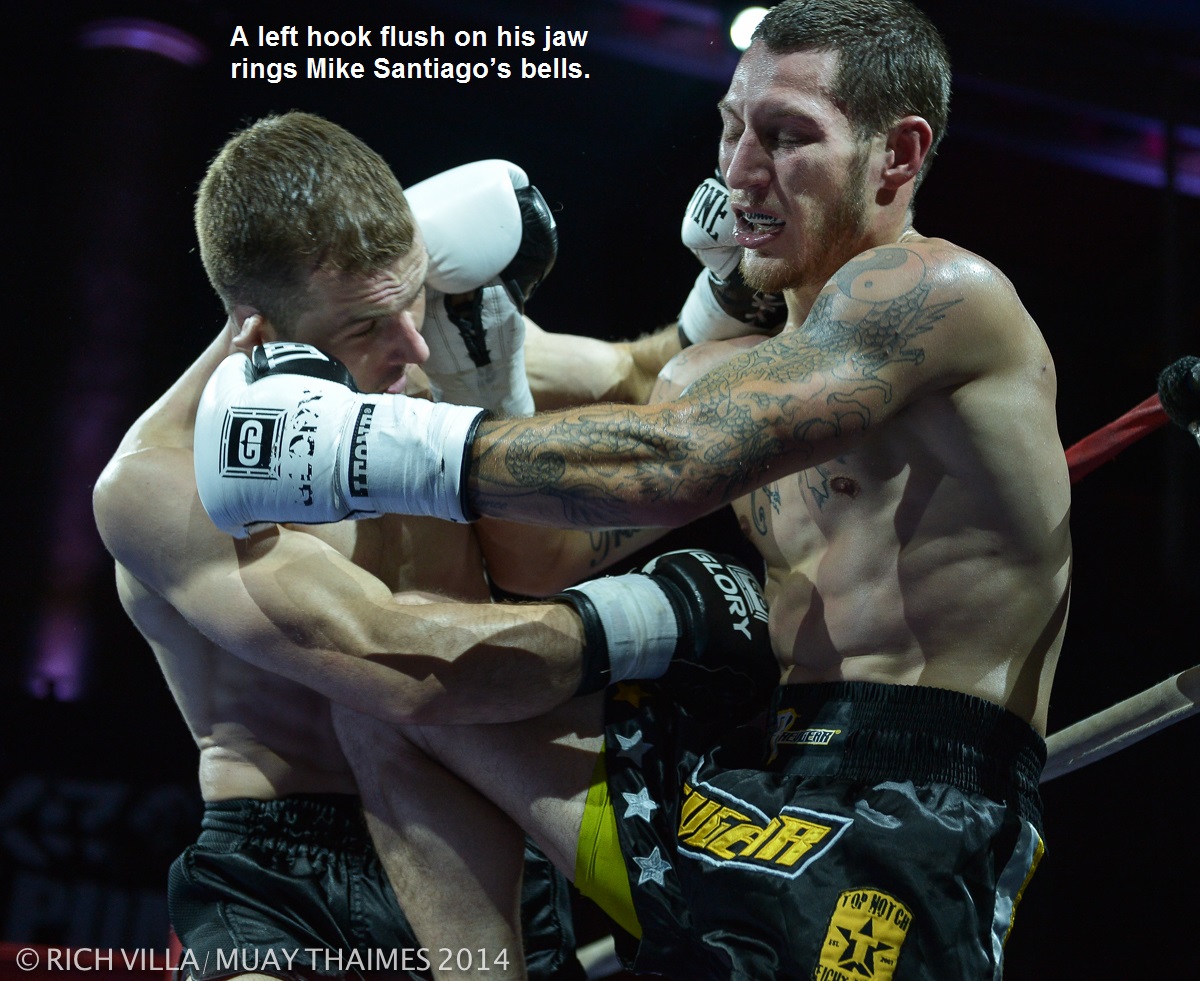 The common core standard here at least is “kill the body and the head will die”. While Elvis goes for the kill, Santiago seems to have stopped paying attention or lost the capacity to defend himself. It’s enough for a ref – whom you can evaluate by his job performance – to show how it should be done. Chris Wagner stops the fight to let the doc also do his job.

Since turning pro, Niko has been starting strong but fading about midway through the match. Against quality completion – like Nick Pace last September the 27th and John Bowman on April the 4th – it’s been bada bing bada boom from bell to bell.

Billy Rose is also no stranger to this ring. The same night that rain fell early on Niko’s parade, a wicked wind blew Chicago’s Top Notch Rose away at 2:45 of Round One. 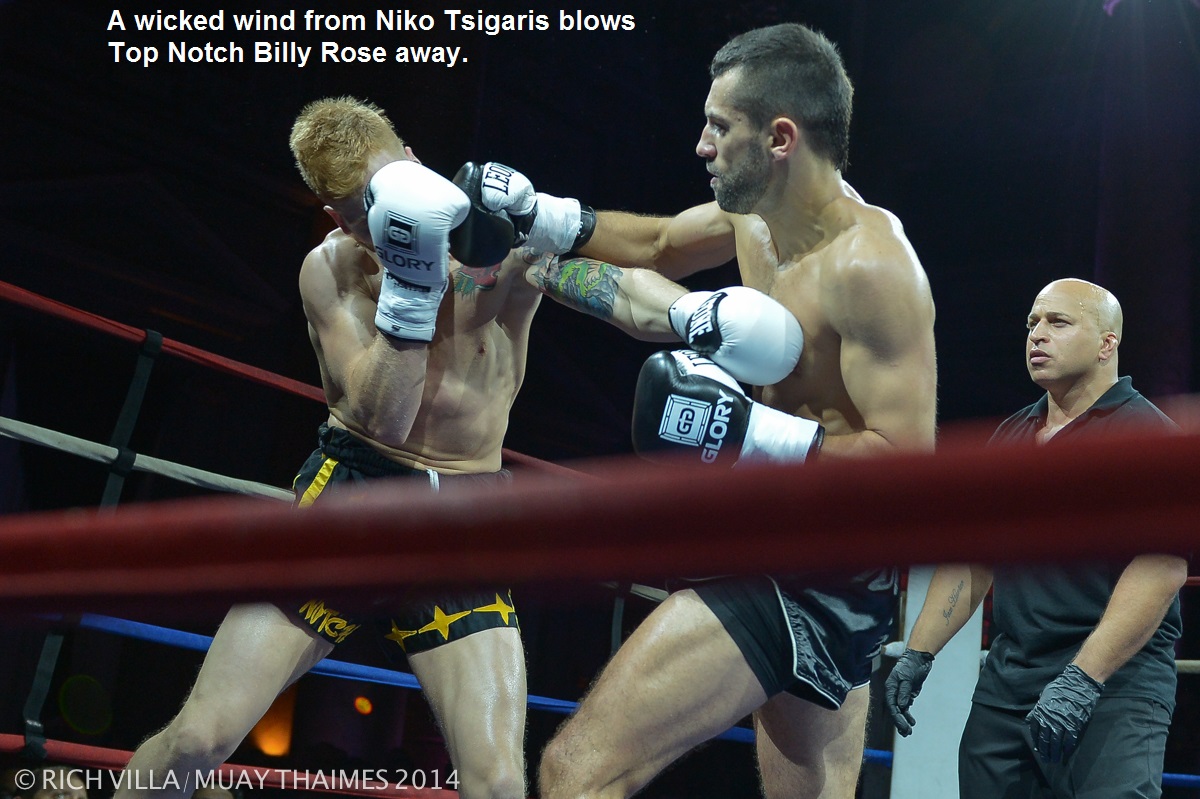 Neither leopard changes his spots to seal this deal. Tsigaris comes out strong and sets a torrid pace. Billy catches two standing eight counts less than a minute from first bell. Three’s a charm, and he exits early.

We know more about Billy Rose from this than we do about Niko Tsigaris. You get ahead in this business by fighting up, not down.

It seems like Cruel and Unusual Punishment for a native son from Detroit – which has experienced so much heartache – to come all this way for a demolition derby in the shadow of Wall Street. Is there any place better at steam rolling whoever gets in the way of what it wants?

Unlike the loose cannons – which are apt to sink their own ships – Julio Arce takes aim at risk and opportunity. His exchanges with Brian Burgan are crisp. They’re also purposeful. Julio’s left is getting through. Burgan seems unable to defend himself against them. It looks – by the first round’s end – like Arce has managed to hurt Brian. 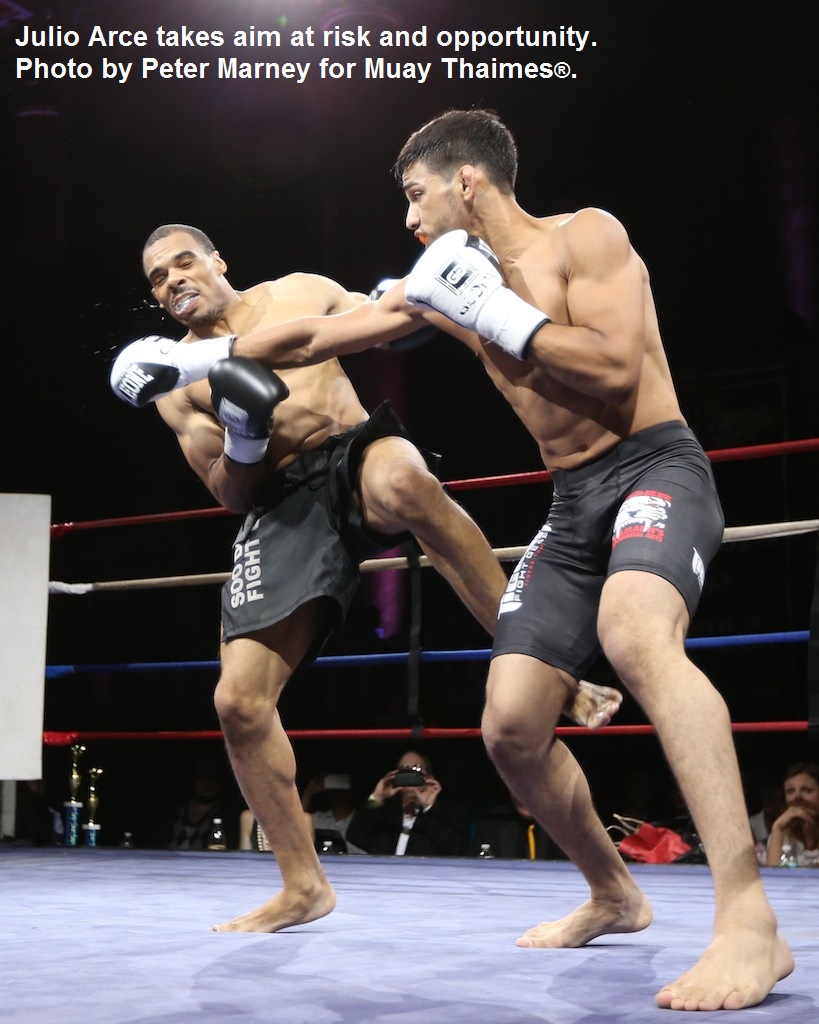 They’ll tell you on Wall Street “buy the rumor, sell the fact”. Brian buys a bull dozer from the Brooklyn-Queens Expressway. Julio sells him cab fare to LaGuardia Airport. Referee Chris Wagner paves the way with an early curfew, so they can both catch a pizza at Lombardi’s before Burgan hits the road back to Motown.

You’re not going to see anyone do the tricks better than Andrea DeAngelo. She also exhibits a fashion flair, which just happens to precipitate a wardrobe malfunction. Though it’s not quite as sensational as Janet Jackson’s at Superbowl XXXVIII, neither should it go unremarked. The message in this media is: “if you’ve got it, flaunt it”.

Andrea’s left jab works all night for her, except when she inexplicably goes into hibernation. That’s also when Lou’s blood pressure begins to code, as Theodora Pisiolis gets her knees into the action. The clinch clearly isn’t Andrea’s favorite place to hang out. It’s probably what costs her a round on all of the score cards. 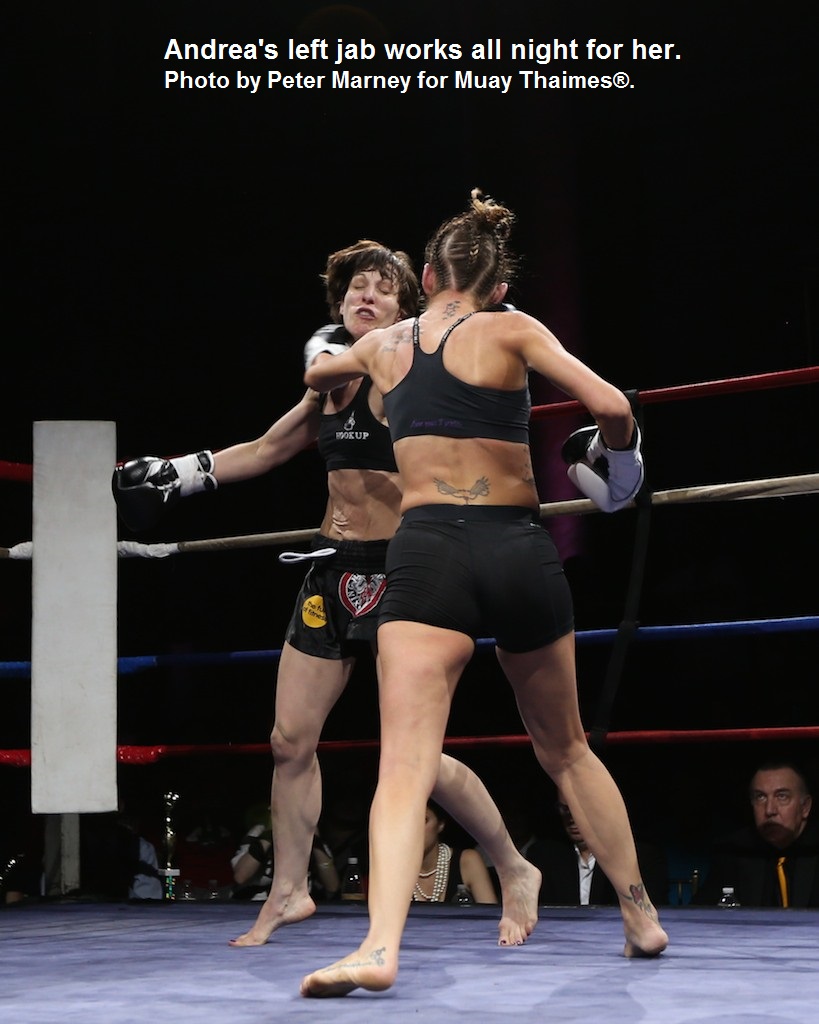 When she flaunts it, though, DeAngelo blasts Theodora with a spinning back fist in the opener. She later drops the Canadian with a high octane mule kick in the same round. Finishing with a flying knee at closing bell, Andrea launches off the canvas like a rising star.

Given Glory Sports International’s uniquely male selling proposition, we just don’t live in a fair world. Theirs is not a business model that endorses gender neutrality. All the more reason to patronize shows that headline the best from both worlds.

Rich Villa’s Photo Gallery is also a  CLICK AWAY.

If money talks, you’ve got to believe that it’s eventually going to connect with whoever figures out how to listen. What it’ll take is a school of hard knocks like Combat at the Capitale to put the ladies on a career path to equal pay for equal work. We’re perfectly capable in this country – and especially in this town – of standing up to the profile of our own destiny.