Demons of Demolition in Bowery Battle

Elvis was just too much for André. Photo by Peter Marney

When a decision goes to the judges, balloting by round only makes it possible to conjure a whole from the sum of individual parts. It is an arbitrary simplification that we have to abide for the sake of objectivity. A fight’s dynamic typically is more like the journey towards a destination. There is a dramatic sequence of beginning, middle and end to reach the destination or outcome. That’s why a decision is often anticlimactic in the fights. The drama should never be  whether the judges got it right.

Before Glory │ K-1 Rules came to town, Muay Thai’s clinch seemed to tame Niko’s buoyant spirit. He is like a cheetah on the African savannah: snarl in stride. The percentages go against this cat, if a chase lasts long enough to suck the oxygen out of his lungs. It’s risky also for these predators to try punching above their weight, because the hunter then becomes the hunted.

Twice now in succession, since turning pro, Nico has started strong only to fade in the stretch. The outcomes in both bouts have been hostage to the moment in time – when tide turns – in balloting by round. It was late enough against Nick Pace (September 27, 2013) for the split to skew towards first impressions.

Nico worked the stationary target on Bowman’s neck like a speed bag. Photo by Peter Marney.

John came into the ring tonight looking already worse for wear. Nico punched the stationary target on Bowman’s neck like a speed bag. The tide turned here about midway through the second round. The pivotal moment came sooner for Tsigaris than against Nick Pace. Momentum switched on a flush counter that caught Nico flat footed.

Like Nick Pace before him, John was visibly the heavier hitter. Although judges can reflect this in their balloting, short of a two-point round, votes all count the same in the ten point must system. With the heart of a jungle cat, Nico battled to the bitter end, but timing is everything. “Time and tide wait for no man.”

With Mike Fischetti and Malik Blake both on the threshold of light heavyweight prominence, they’re a double dose of headline talent from Team Tiger Schulmann. Malik is the aspiring Harlem Globetrotter in this dynamic duo.

From a tense beginning in round one through the bada bing │ bada boom in round two, Blake’s victory was the successful outcome of an integrated battle campaign. The Harlem Globetrotter’s campaign climaxed in round three on a rib crusher that came with a damage kicker. On the impact of a low kick │ body kick combination, Gueorgui’s retreat surrendered his best possibility of deterrent. An overhand right then dropped him for a respite of eight. It is well known that if you kill the body, the head will die. After a knee bent Smaguin out of shape, Malik went head hunting and got the kill. 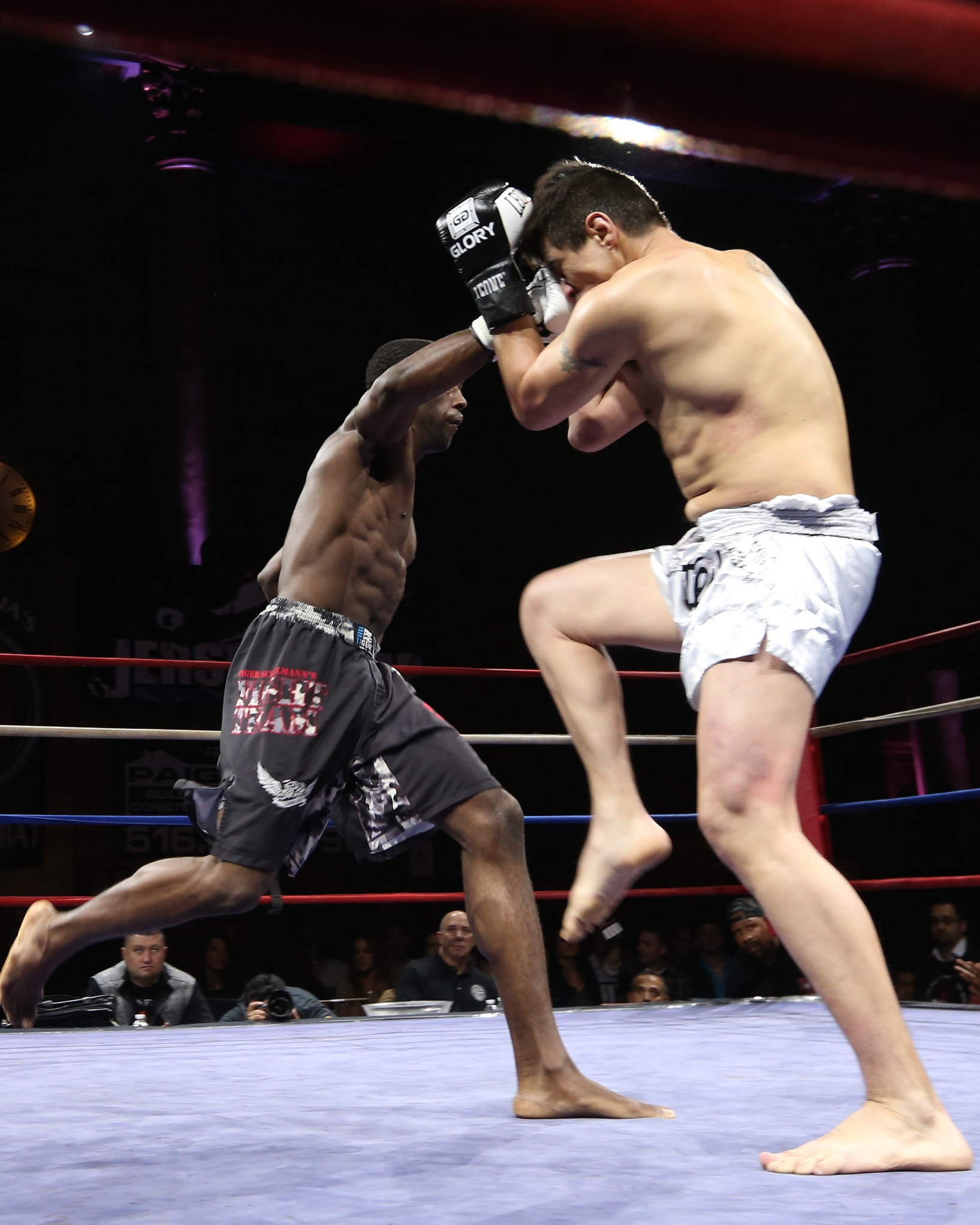 Malik went head hunting and got the kill. Photo by Peter Marney.

Two familiar faces to Capitale crowds made their pro doubt debuts tonight. Even though more local tickets are sold here than anywhere else – except MSG and Barclay’s Center – no show is more hamish than Lou Neglia’s. If Jennie lost the split decision, it wasn’t for lack of trying. Anna was the heavier hitter with the better batting average.

Anna was the heavier hitter with the better batting average. Photo by Peter Marney.

At a Godzilla thriller, you expect the final bell to toll for an inquest rather than a referendum. Nowhere do you see bigger size mismatches than in Paleontology. In the shadow of a human “Jurassic Park” – on the same tectonic plate as Washington Heights – the visitor Shamir Garcia from Detroit brought a unique selling proposition: how to survive with downsize. You just have to try harder.

What Shamir tried harder to do was take the fight to Carlos, who worked his reach advantage to punish the risk taker for his impunity. It was a transparent fight to score but trickier to judge. They do crash tests in Motown to tempt fate, so we’re all less likely to become its victim. If Shamir Garcia didn’t risk the lumps he took, who among us really believes that the meek shall inherit the earth?

In the shadow of a human “Jurassic Park”. Photo by Peter Marney.

There is some collateral damage from Glory’s claim jumping K-1 rules in how it complicates Common Core Standards for today’s new beat generation. Abstaining from elbows, you’re allowed to clinch but not too much. Although knees are also allowed, it’s kind of mezz-a-mezz. On Low Kick’s road less travelled, veteran ref Chris Wagner looked like “Welcome Back Kotter” schooling two Vinnie Barbarinos, who’re “so confused”. (We’re working on a retro theme in Low Kick.)

Once he got into the groove, though, Andrew went from the sorcerer’s apprentice to a demon of demolition. Nothing does the trick better than sending the contender’s torso a distress signal with bad intentions. If Paul needed a refresher in Low Kick’s rules of engagement, simple power punching off a left lead was the seal in Andrew Ball’s deal. It was the champ’s first successful title defense, since winning the crown at WKA’s Worlds in Italy. Ask not for whom the bell tolls, Paul Miller. It tolls for thee. 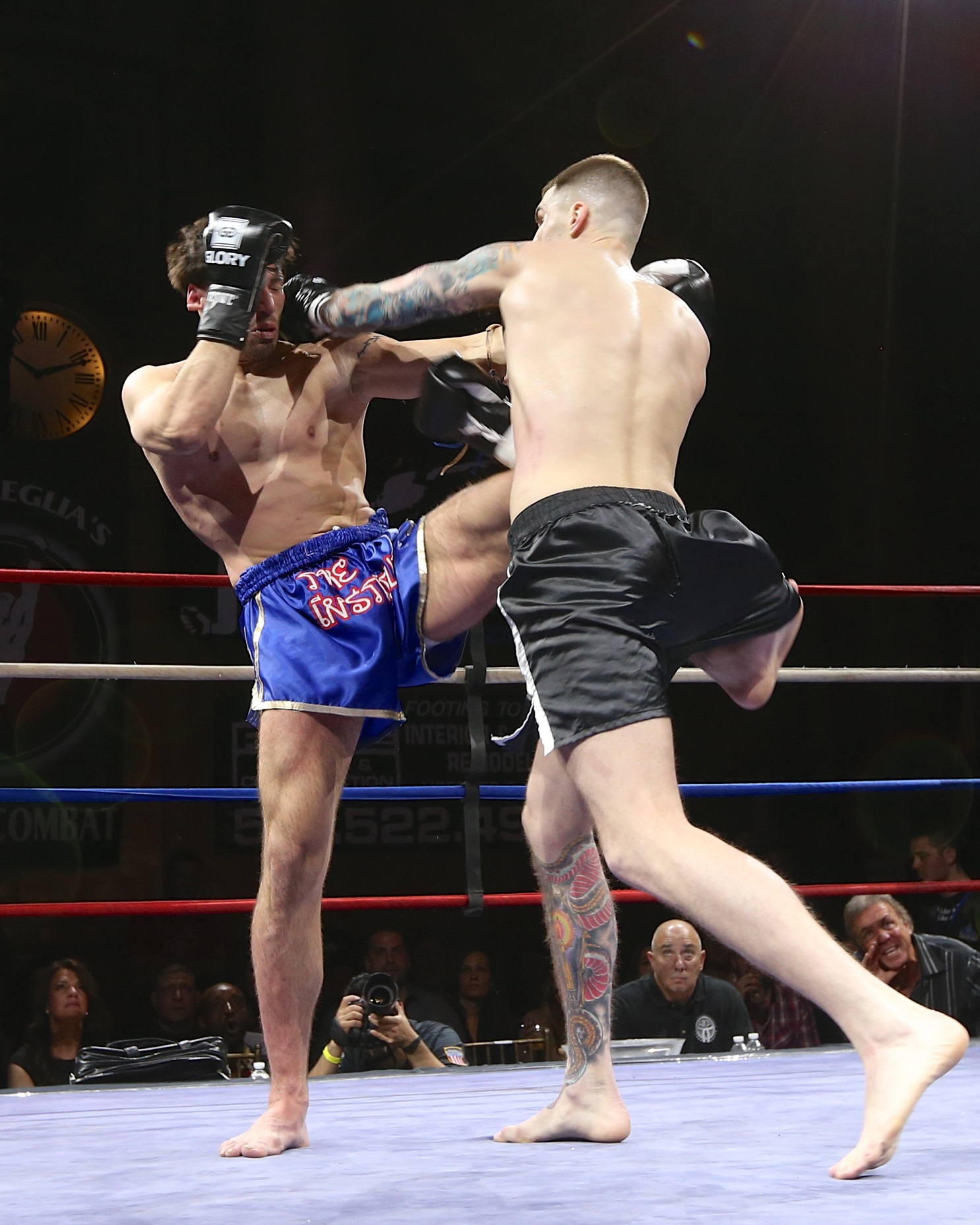 Power punching off a left lead. Photo by Peter Marney.

This was a battle for bragging rights within WKA’s footprint on the North American continent – in a radius around New York City and also around the Confederacy’s capitol of Richmond – which is quite an historical distance to travel. It was the kind of rematch familiar to WKA’s full line of customer friendly product diversity.

Jeff Brown and Mike Fischetti first fought to a majority draw under modified Muay Thai rules in the same place on September 27, 2013. The Canadian champ had done an effective job in the clinch of taming Iron Mike’s fury. Unable to get his claws out of their paws, Fischetti spent more time on the hook (of Muay Thai knees) than most fish would’ve survived out of water. If this hadn’t been yet another affirmation of No Child Left Behind in WKA’s administrative policies and practices, there wouldn’t even have been a stalemate to console Fischetti’s fans.

No less of an authority than  Mike Miles has observed that “styles make fights”. Another way to put it, “don’t come to a gun fight with only a knife”.

Glory’s unique selling proposition is that their fights are more exciting for fans to watch without Muay Thai’s clinch. How tempting is it to unravel the invisible thread in a fabric of deception? Behold  EXCITEMENT from Kru Gustavo Luna at Tarragona’s Templo Muaythai Club in Spain.

Customer friendly to a fault, WKA switched North American title belts from modified Muay Thai to Glory rules. Copping a Kenny Rogers quote “You got to know when to hold ’em, know when to fold ’em”.

Fischetti came with a fire in his belly and raged like a bull. Photo by Peter Marney.

Iron Mike’s take away was much more a measure of his manhood: “Difficulties break some men but make others”. [Nelson Mandela] No more patsies and palookas to romance a sterile stone. He came with a fire in his belly and raged like a bull. Only the ropes kept Fischetti from skewering the Canadian. On impulse, Referee Chris Wagner started to administer a standing eight count but didn’t like what he saw in Jeff’s eyes and called it quits better to be safe than sorry. This was the fight Mike Fischetti finally walked in Rocky Marciano’s shadow.

Julio Arce has shown so much promise in his amateur apprenticeship, it’d be a lament for destiny’s child should we lose such a prodigy to MMA. Nowhere is there more   income inequality than the purses for stand-up in America. Explaining why he’d coasted through the fifth round against Sakmongkol Sitchuchoke (August the 20th, 2011 in Las Vegas), Cosmo Alexandre gave it up. “For $500, it wasn’t worth knocking him out.” 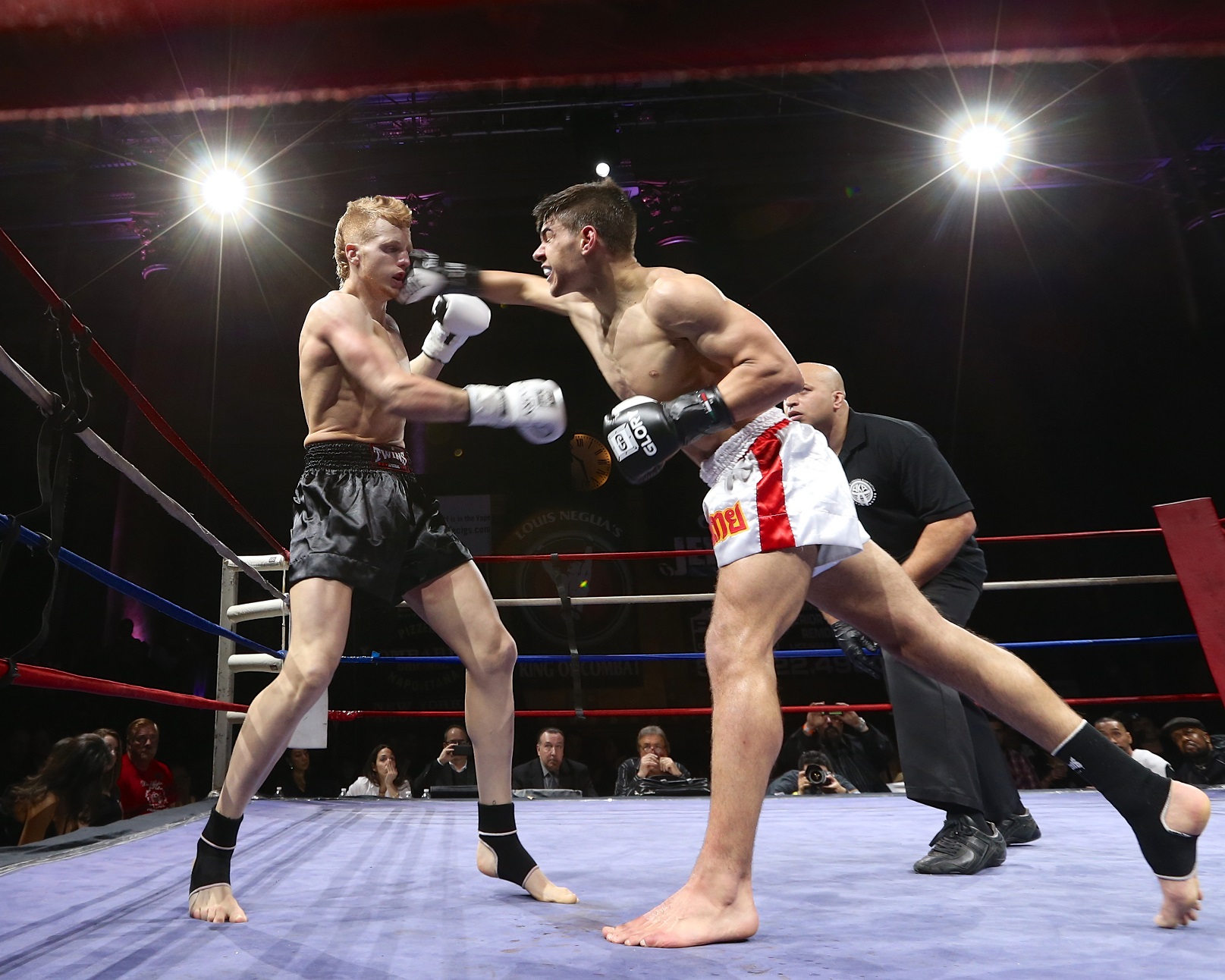 Every swing of the bat put a runner in scoring position. Photo by Peter Marney.

Until gambling terminals are installed in the arenas to fund our own enterprise – which is the ticket to prosperity in Bangkok – a payroll like Glory’s makes it possible now for someone like Julio to stand his ground. The ground is going to get a lot tougher to stand, though, for whoever sets his sights on scaling fame and fortune’s summit. Although pretenders there are many, all contenders but one will somewhere │ sometime meet their match.

In the fairy tales of match making, this was like “Goldilocks and the Three Bears”. Neither was it too big nor too small but just right for a prodigy. Julio dominated the terra incognita that was Zarukh Adashov. If he didn’t manage to hit it out of the park, every swing of the bat put a runner in scoring position. On the tally of innings, he put up a winning score. 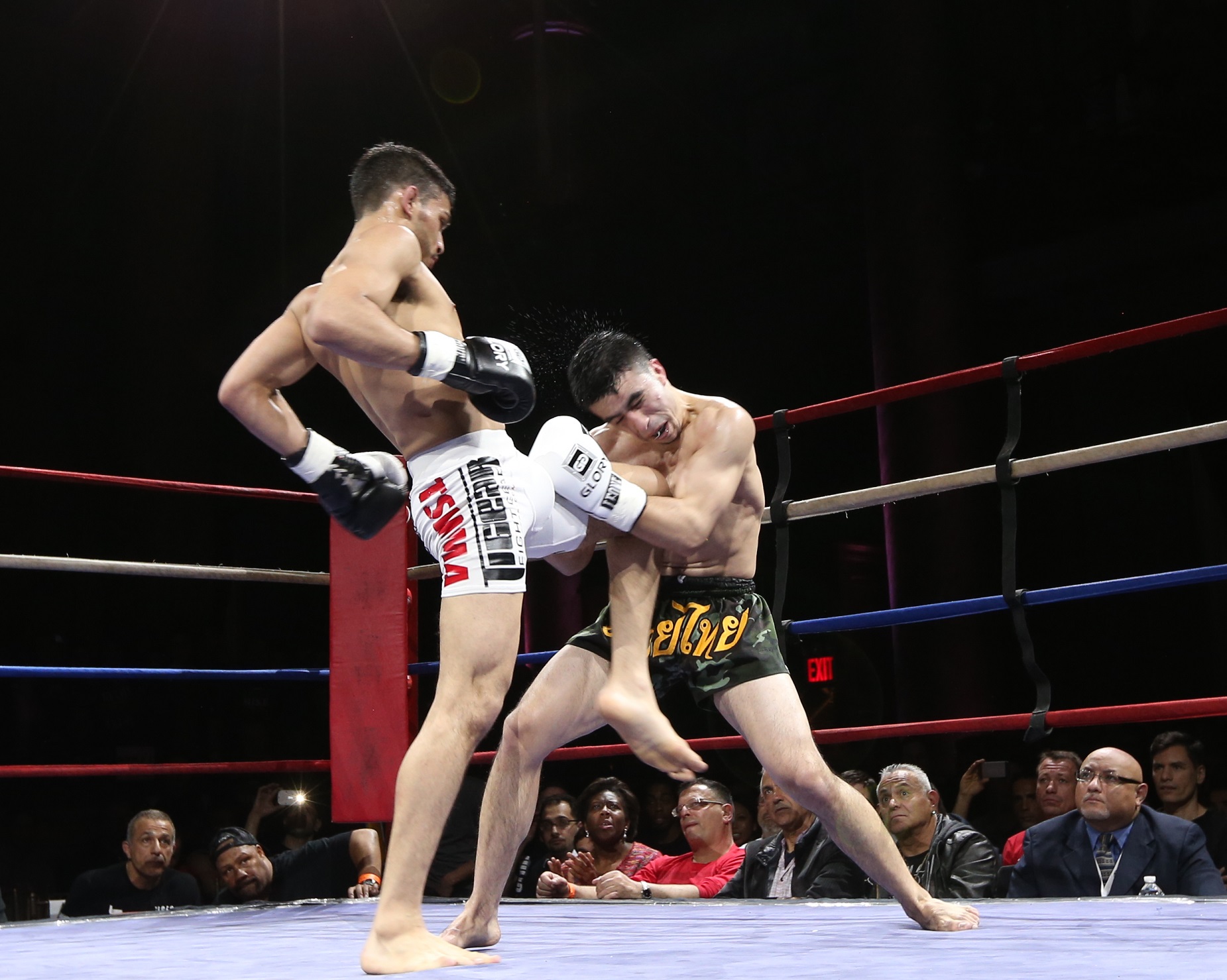 Julio dominated the terra incognita that was Zarukh Adashov. Photo by Peter Marney.

Although Julio Arce travels unimpeded on the Brooklyn-Queens Expressway, it’ll remain a closed circuit until he steps outside his local comfort zone and gets past the rookies to ranked fighters. No one has been more successful than his training manager Tiger Schulmann in developing talent for the UFC’s big paydays nor more masterful than Lou Neglia in showcasing NYC Metro’s rising stars. It’ll be a fairy tale come true, if they can medal in two sports.

Now you know why this was the main event. If this town does nothing else, who makes it here can make it anywhere.