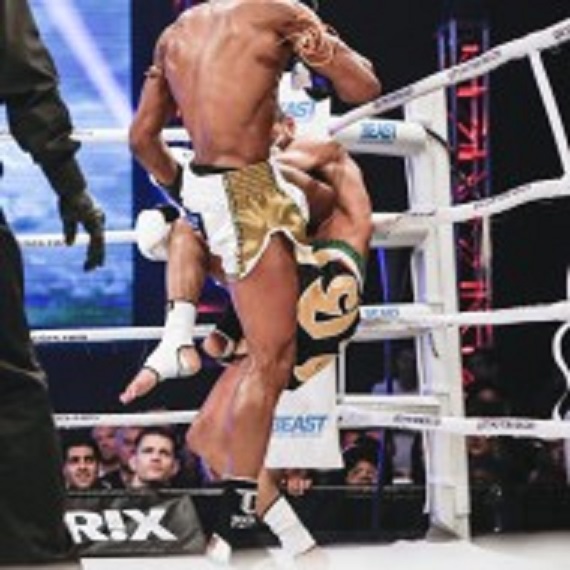 Now that the smoke has cleared, I would like to take a moment to give my input on the Glory 12 show at The Theater in Madison Square Garden. It’s a blessing for kickboxing and Muay Thai fans that Glory has come to the Big Apple. We welcome them with open arms. Of the seventeen matches, only six went to the judges’ score cards. The main event featured a four man tournament to crown a lightweight champion. It also featured what was dubbed “The Battle of the Coasts”, as NYC’s own Wayne Barrett challenged Glory’s middle weight tournament winner Joe “Stitch ’Em Up” Schilling from Dayton, Ohio by way of Los Angeles. 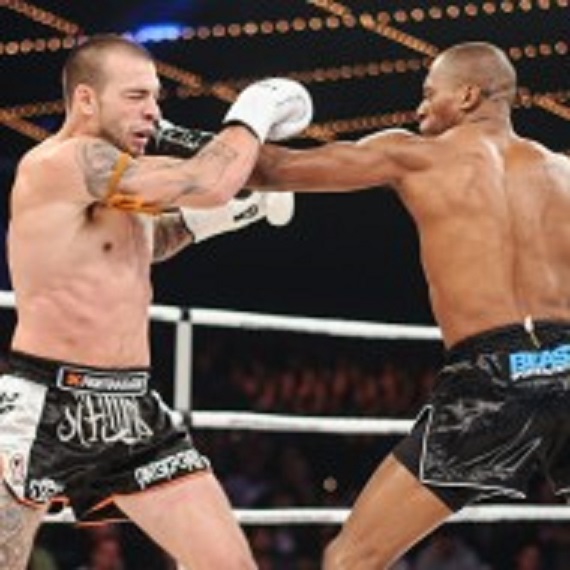 Wayne connected with enough hooks and straight hands to out point Schilling in the first round. Barrett set the pace off second bell, continuing to land effective punches. He sent Joe to the canvas twice. “Stitch ‘Em Up” managed to suck it up just enough to be saved by the bell.

Schilling needed a knock out in the third round and went for it. Although he dropped Wayne with a knee to the head, Joe couldn’t finish it. At the end of three rounds, Barrett won by unanimous decision: 28-26 on all three score cards. Coming in the heavy underdog, my hat’s off to Wayne, but he still didn’t “Stop the Crazy”. 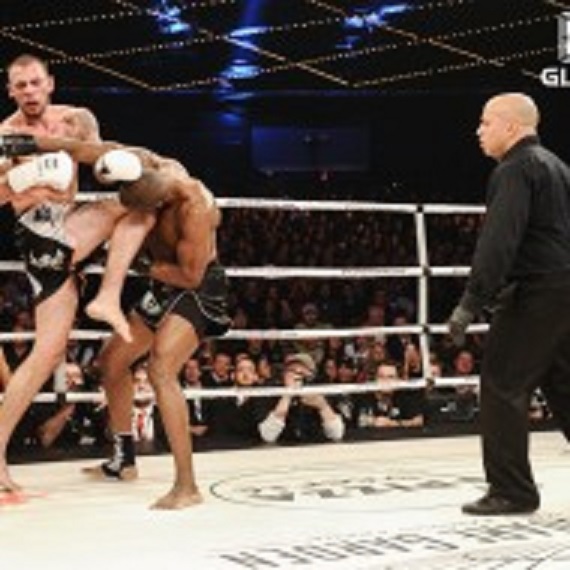 Despite the upset, Barrett trails “Stitch ‘Em Up” Joe in Glory’s rankings, just as Artem Levin’s conqueror ranks below the Russian showboat on a scale of squeezing the most calories out of a thin talent pool. Who decided tenure makes any sense in this sport? Check it out: http://www.gloryworldseries.com/en/news/view/387.


1. Robin “Poker Face” Van Roosmalen (Holland) vs. Davit Kiria (Republic of Georgia).
In the first elimination bout of the four man tournament, Holland’s Robin Van Roosmalen took on the European Karate Champion Davit Kiria. First round was a pretty even for both fighters. Davit looked like his boxing has improved dramatically, since the last time I saw him fighting against Giorgio Petrosyan.

Both fighters landed solid punch-kick combinations – very hard round to judge. Next round Roosmalen was more active, taking the fight to Kiria, who seemed to me a little more conservative second time around but was still able to get off his patented spinning heel kick along with solid push kicks. Third round Roosmalen picked up where he’d left off in the second round, continuing to push the pace. Kiria also picked up the pace. Good round for both fighters. It could have gone for either fighter. At the end of three rounds, Roosmalen got to go for the Glory.

2. Giorgio “The Doctor” Petrosyan (Armenia by way of Italy) vs. Andy “The Machine” Ristie (Suriname).

In the second elimination bout of the tournament, Giorgio Petrosyan faced Andy Ristie. Petrosyan, considered pound-for-pound to be the best lightweight fighter in the world, was an odds on favorite. Ristie came in as the underdog. That’s sometimes all the drive a fighter needs.

Round one was more of a feel out round for Petrosyan and “hey mom look what I found” for Ristie. Petrosyan, always the technician, took his time and picked his shots. Ristie didn’t pick anything. He just shot and connected.

Andy’s unorthodox style might have thrown Petrosyan off his game a little bit. He went into defense mode and focused more on countering Ristie, which he did effectively, out scoring Andy with counter after counter. Petrosyan was up by two rounds. Ristie, sensing he was down, came out of the corner like a bat out of hell and took the fight to Petrosyan. 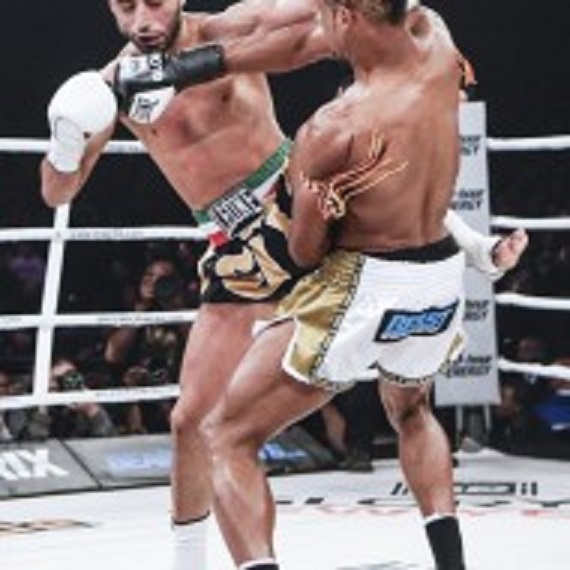 The strategy paid off. Petrosyan was thrown off balance by Ristie’s attack. After being separated, time and again, Andy attacked. He landed a straight hand that sent Petrosyan to the canvas. Petrosyan was unable to recover and the fight was stopped. Undoubtedly one of the biggest upsets in the sport.

It was time for the final. The winner would receive a $150,000 pay day, be crowned tournament champion and ranked number 1 in Glory’s lightweight division. Ristie used his reach effectively to keep Robin at bay with what is known as a “stiff arm” and push kicks. Van Roosmalen seemed to be suffering from Zambidi-itis. Definition: A great short fighter trying to work his way in against a taller fighter.

Andy picked his shots through the round, but van Roosmalen would not be intimidated. He pressed forward. Ristie side stepped and countered. Then he blasted a combination, ending with a right hook that put Robin on the canvas. Van Roosmalen was able to recover and make it to the bell ending the round. As with Petrosyan, Andy came out of his corner looking for the kill.

It was like déjà vu from the Petrosyan bout. Thrown off his game, Robin tried to trade with Ristie but to no avail. Andy dropped van Roosmalen with a vicious uppercut that anointed what he’d disjointed from Georgio Petrosyan. “New York. New York. If you can make it here, you can make it anywhere.” 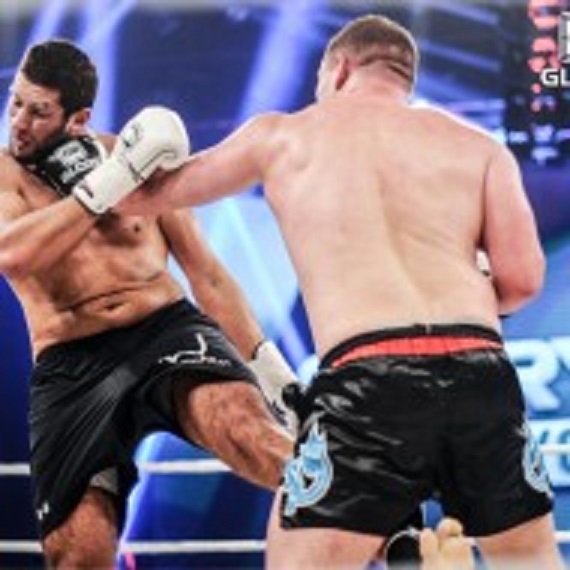 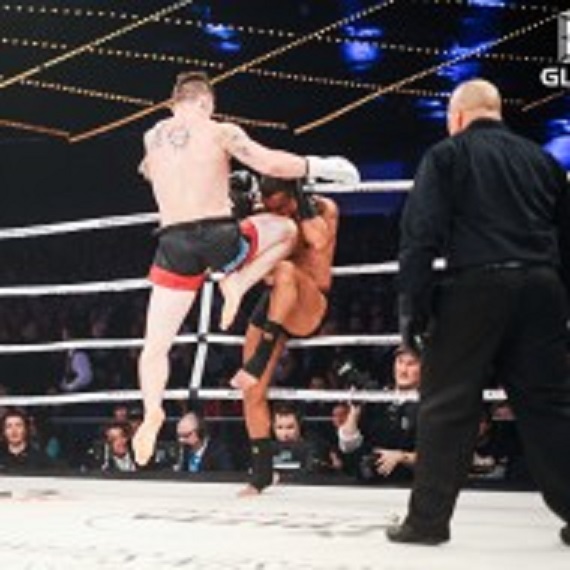 In closing, all I can say is WOW! What a way for Glory to debut at the Garden. It was an action packed night of fights. I’m looking forward to the next show. If anyone from Glory is reading this: Yo. Brooklyn has a new arena. It’s called the Barclay Center. Can you bring the kings of kickboxing to the county of Kings?