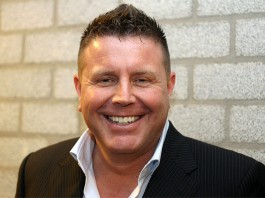 SINGAPORE (March 27, 2013) – – Glory Sports International (GSI), the parent company of the world’s new premiere kickboxing league, GLORY World Series, today announced that Simon Rutz, the founder and former owner of ‘It’s Showtime,’ the world championship kickboxing league that GSI purchased in October, has officially stepped down from his role as a consultant to GLORY and retired from the kickboxing business.
“It’s been a phenomenal run and I have so many incredible memories from the time I’ve spent in this great sport,” said Rutz, who launched It’s Showtime in 1999 with an event at Kennemer Sportcenter in the Netherlands and promoted his 60th and final event in Sao Paulo, Brazil on Nov. 10, 2012. “I am looking forward to watching many of the fighters we built at It’s Showtime continue their careers in the GLORY ring where the competition is the fiercest in the entire kickboxing universe.”
During his tenure in the sport, Rutz promoted a multitude of kickboxing superstars including top-ranked heavyweights Daniel Ghita and Tyrone Spong and lightweight (154 pounds/70 kilograms) contender Robin van Roosmalen, all of whom have since become GLORY competitors.
“Simon built a very strong enterprise with It’s Showtime, and fans worldwide demonstrated a sincere enthusiasm for his product, so GLORY was fortunate to have the opportunity to acquire the company and place all of its world-class fight talent under the GLORY umbrella to form the most powerful roster in the history of kickboxing,” said GLORY CEO Andrew Whitaker. “We wish Simon all the best with his future endeavors and thank him for his contributions to the sport.”
GLORY returns to the big stage with a star-studded event at Ülker Sports Arena in Istanbul, Turkey on Saturday, April 6, headlined by a long-awaited rematch between world No. 2 ranked Daniel Ghita (46-8, 35 KOs) of Romania and world No. 3 ranked Gokhan Saki (79-16, 55 KOs) of the Netherlands. The winner will receive a shot at reigning GLORY Heavyweight Champion Semmy Schilt.
On Saturday, April 20, GLORY heads to the Mediolanum Forum in Milan, Italy with another stacked card headlined by a meeting between world No. 1 lightweight (70 kilograms/154 pounds) Giorgio Petrosyan (75-1, 35 KOs) of Italy and fellow superstar Hafid El Boustati (67-7-3, 18 KOs) of The Netherlands.
On Friday, May 3, GLORY returns to Tokyo, Japan with a one-night, eight-man featherweight (65 kilograms/143 pounds) ‘Slam’ tournament that will award a total of $180,000 in prize money, including a grand prize of $100,000 to the winner. Confirmed for battle in the single-elimination affair at Ariake Coliseum thus far are three-time French kickboxing champion Abdellah Ezbiri (32-6, 11 KOs) of Morocco via France, world Muay Thai champion Mosab “The Jaguar” Amrani (48-7-4, 14 KOs) of Holland and KO artist Marcus Vinicius of Brazil.

This entry was posted in News & Results and tagged featured, Glory, Its Showtime, simon rutz. Bookmark the permalink.