Integrity Needs No Indemnity from Collateral Damage in Combat at the Capitale on October 17, 2014 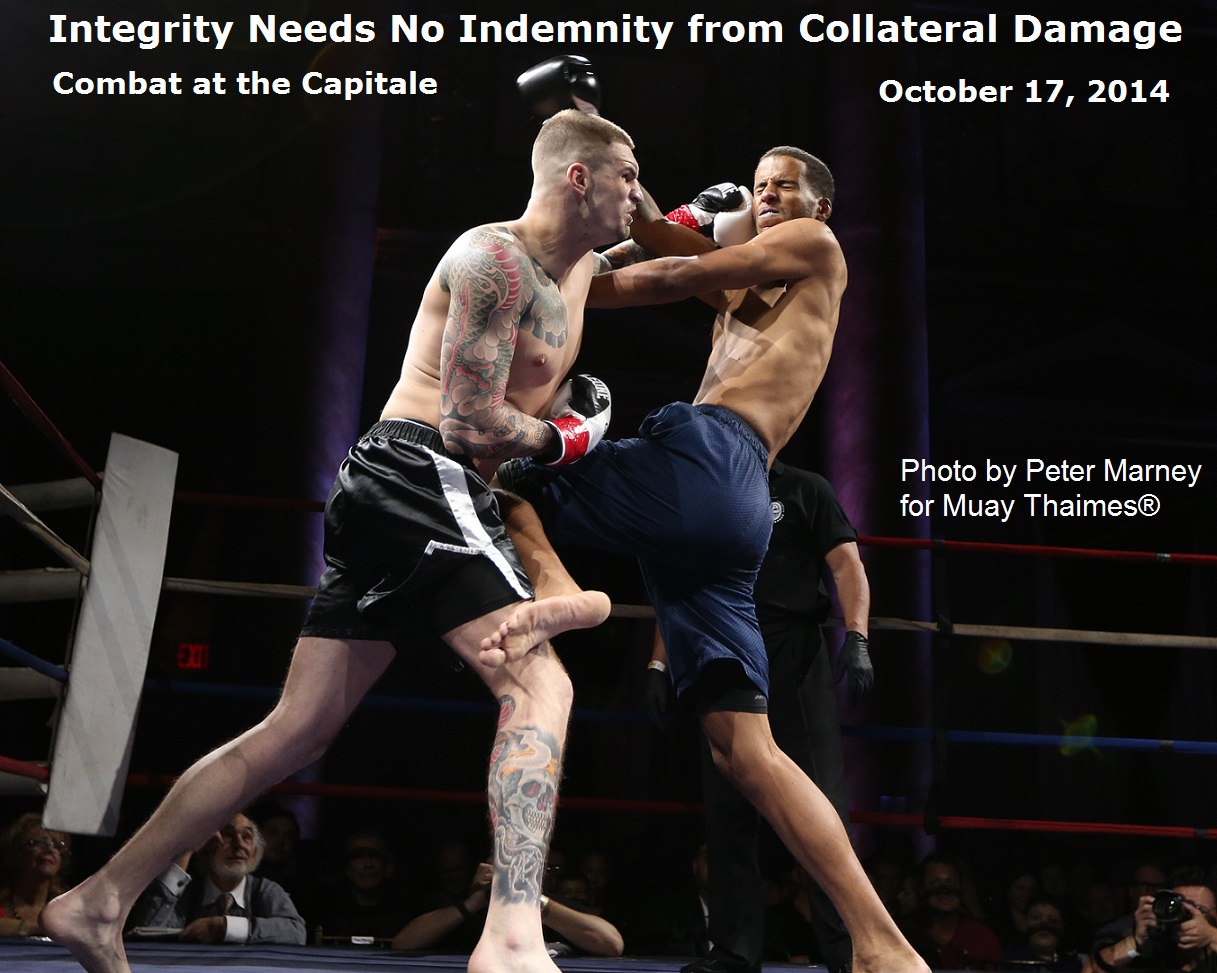 While covering a show in Las Vegas once, I overheard Pat Miletich explain to the tv audience “what the judges are looking at”. Pat knows more than I ever will what the judges should be looking at. I’ve covered shows, though, with judges who weren’t even looking. (See “Bridge Over Troubled Water Takes Credibility Toll on Fans and Fighters”) More common have been the judges who don’t know or don’t care what they should be looking at. (See “What Shall It Profit a Man, If He Gains the Whole World but Forfeits His Soul?” in Muay Thaimes®, Vol. IV, No. 3, Winter of 2010, pp.78-86.)

What got me thinking on this was how the WKA’s Officials-on-Demand has made NYC shows seem like A Tale of Two Cities, where: “It was the best of times, it was the worst of times, it was the age of wisdom, it was the age of foolishness…we were all going direct to Heaven, we were all going direct the other way.” Take this to mean that we’ve got kind of an escort service here that makes a unique selling proposition out of customer satisfaction.

Officials-on-Demand come in a package deal for NYC show producers. The package includes a local favorite option for whatever it takes to satisfy some of these customers. We’ve got a sore loser with anger management issues, for example, who never met an outcome he couldn’t handicap with artful match making.

We’ve also got a local legend with adventure deficit. Don’t take my word for it. Betting only local favorites at the Friday Night Fights in NYC on September the 19th, you could’ve parlayed 8 out of 10 winners wearing a blindfold. The identical bias yanked Muay Thai out of the Sports Book at the Hard Rock Hotel in Las Vegas. Trust me. I did my due diligence there. That Sports Book used to cover my out of pockets for the trip.

James Connor at the Friday Night Fights in New York City on May 2, 2008

So it’s not exactly forcing facts to fit a theory for Artyom Sahakyan (Lion Martial Arts) to get the idea that there is a bias against his crew. Two out of the three big NYC shows exercise a local favorite option in their WKA Officials-on-Demand package deal. If there is a moral or ethical difference between bias and pandering, integrity needs no indemnity from collateral damage.

Precisely because WKA’s reputation precedes it, Artyom Sahakyan should know that there is ample precedent for pigs in a poke on this circuit. Amble with me down memory lane to May the 2nd, 2008. (See “Church Street Boxing Gym’s Friday Night Fight Series in NYC” in Muay Thaimes®, Vol. II, No. 3, Fall of 2008 on p.42.) Sitan New York’s Kingsley Opaku had a ko nullified on the most bogus of pretexts: injury stoppage on account of the beneficiary James Connor’s head scratch, which literally took a band aid to patch. Rather than the ringside physician, it was WKA’s ref Chris Wagner who granted clemency. He also happened to be hosting Mr. Connor from Evolution Muay Thai in Wombourne, England. At some point, I just gave up trying to make this kind of stuff palatable for public consumption.

Don’t think for a New York minute that these shows are any more successful for the economic equivalent of DUI. On any tally of box office ballots, Lou Neglia’s Combat at the Capitale draws a Winners Circle around some truly staggering numbers. Lou’s patronage has produced 88 success stories, at latest count, that have made it all the way to the UFC, including most recently: Chris Weidman, Ryan Laflare, Al Iaquinta, Costas Philippou, Chris Wade and Truck Gordon.

So many success stories wouldn’t be imaginable, without Brian Crenshaw’s bringing Lou his Officials-on-Demand A-Game. While generalizations can be hazardous to my credibility, a place in Lou’s Winners Circle should be reserved also for the caliber of officials who worked Combat at the Capitale on October 17, 2014. 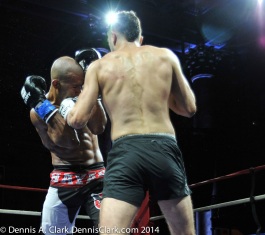 Every fight with Niko (on the right) is going to be a slug fest.

You’ve probably figured out by now that Niko Tsigaris (from Azerbaijan) lost a close one to Villi Bello (from the Dominican Republic) in the main event. Except for an E-Z Pass with Chicago’s Billy Rose on June the 13th, Niko has been in some coin flips this past year at Lou’s house. Career development is like that. Wins or losses matter in relation to the caliber of competition. 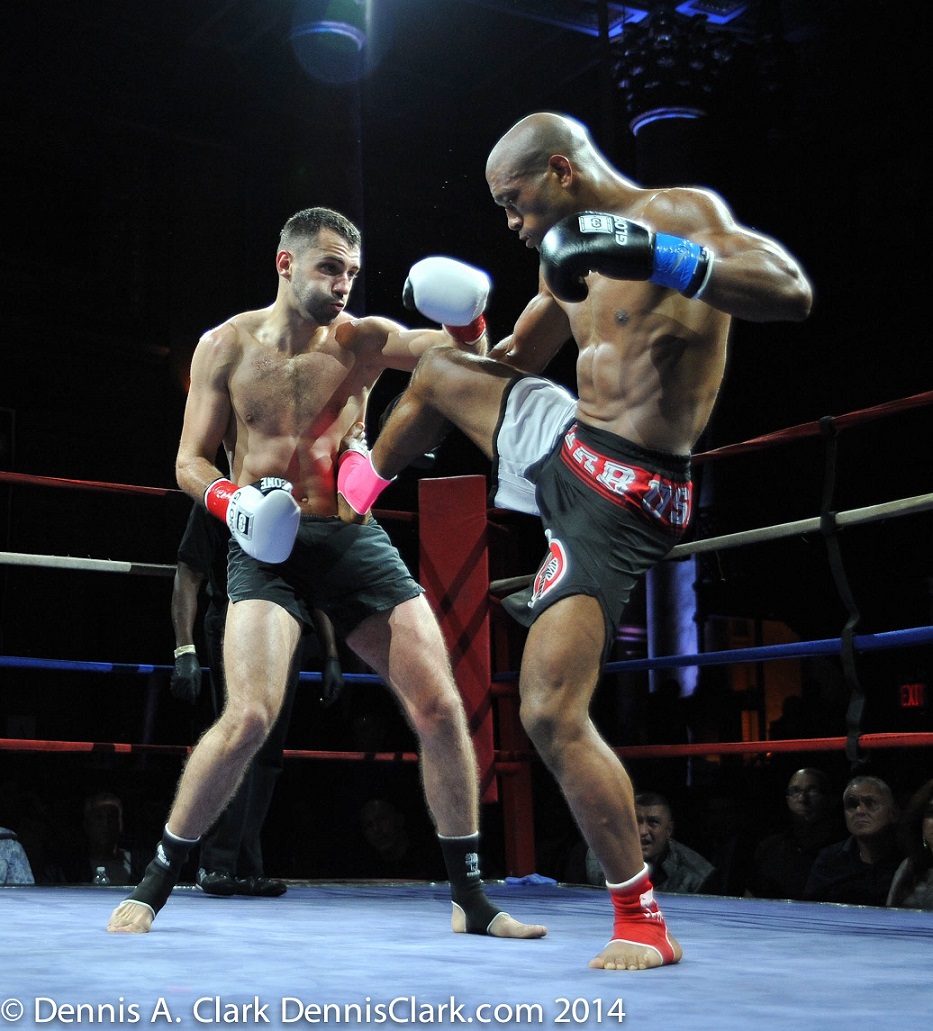 Villi (on the right) seemed to have the power edge.

With a weak clinch, Glory/K-1 rules allow what Niko does best and jettisons the rest. Because every fight with Niko is going to be a slug fest, pecking pales next to power. That’s where Villi seemed to have the edge. 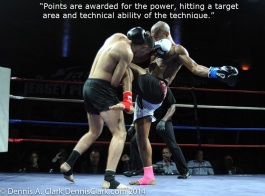 I ran this decision by the British Thai Boxing Council’s Tony Moore, who produced the first draft of what eventually became the American Association of Boxing Commissioners’ Unified Rules for Muay Thai. Here’s what he had to say. “Points are awarded for the power, hitting a target area and technical ability of the technique.” In other words, the judges got it right, which Greg Ardón can tell Artyom Sahakyan doesn’t happen all that often for his crew either.

Winners Circle brings to mind thoroughbreds, thundering hooves, first to the finish. Some careers seem to get there without a single misstep. They need only a showcase right out of the gate. I can think of two hot local prospects on that kind of track: Mike Fischetti (Team Tiger Schulmann) and Andrew Ball.

Heavy hitters like these still have to learn the ropes. Here are some reasons off the top of my head, in no particular order: Joe Schilling, Wayne Barrett and Artem Levin. When bobbing and weaving begins during contract negotiations, the Law of Diminishing Returns is probably sending Andrew’s amateur career an eviction notice. Before Christopher Gray took this gig – case in point – three others took discretion to be the better part of valor.

There was frustration on display in Andrew’s having to chase down a quarry with more flight than fight. Off first bell, Christopher sustained a broken rib. His corner wanted him to quit but – despite appearances – courage doesn’t always pose for a photo op. This was one in which the doc got it right, while Andrew had to settle for a night at the races. What should’ve been an omen was a contender from Chicago for the WKA’s Northeast title. Who’s registering voters in this precinct?

You can learn mechanics in the gym and groove them into moves by sparring. There is only pass/fail grading, though, in the school of hard knocks. On Ray Longo’s teaching to this test, Jennie Nedell should be an inspiration to ordinary mortals without super powers.

Jennie Nedell (on the left) should be an inspiration to ordinary mortals without super powers.

Even rarer than super powers in this sport are managers │ career developers like Ray Longo.

Jennie has been bringing discipline and determination – if not dominance – to her performances, since joining the Serra-Longo crew. On June the 13th, her work ethic was margin enough for victory over a very seasoned Casey Bohrman. It was also enough – on the caliber of Casey’s competition – to graduate Jennie from rookies to rankings.

Even rarer than super powers in this sport are managers │ career developers like Ray Longo. If he’d hit the sweet spot so often on Wall Street, the SEC would probably have Ray on its What Does He Know That Others Don’t Watch List. What Ray knows, apparently, is that Munah Holland could do for Jennie’s rep what Archie Moore did for Cassius Clay’s on November 15, 1962.

Against the 2007 NY Daily News Golden Gloves Boxing Champion, World Combat League, Bellator and Invicta FC veteran, Jennie knew it’d have been game over conceding command to Munah. In the early going, Jennie’s counters were just enough to throw Munah off her game. In the heavier going, it was Jennie commanding the cavalry with Munah holding down the fort. 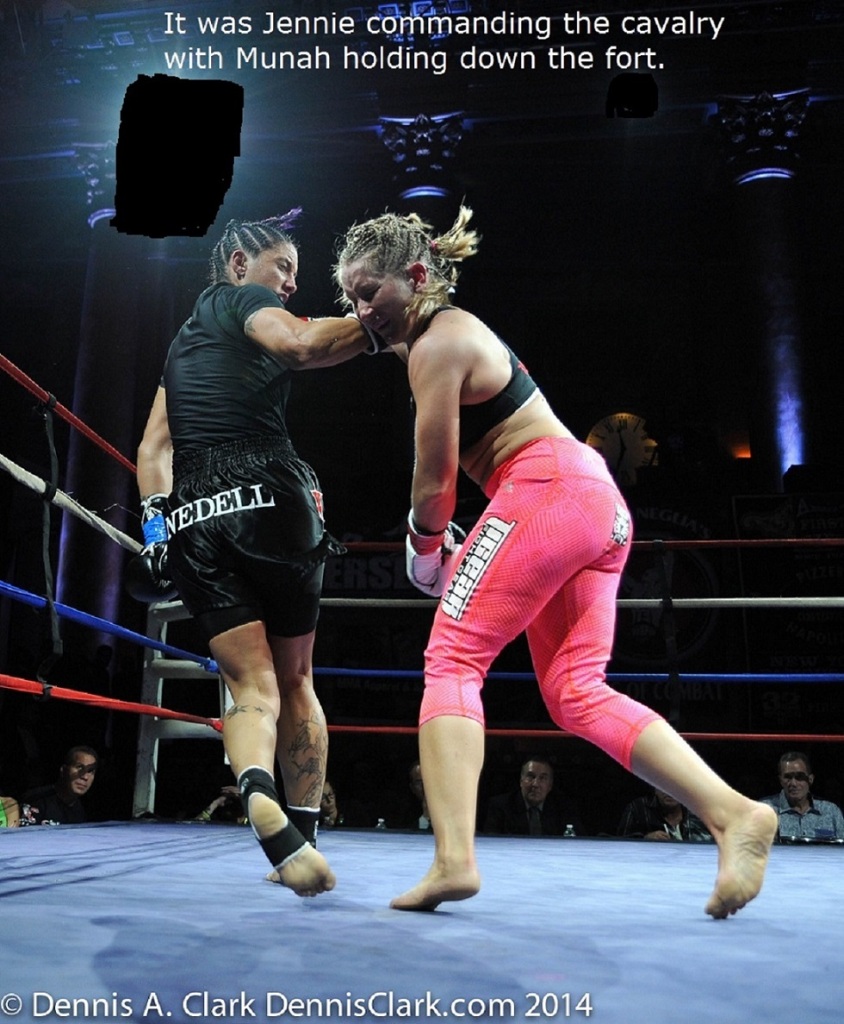 In playing it safe, there’s no place to go but down.

In working a Combat at the Capitale show, ring officials have to multi-task between Low Kick, Glory/K-1 Kickboxing and Muay Thai. Giovanni Moljo took them somewhere that I’ve only seen once before, when ‘The Alien Fighter’ Manson Gibson beamed down on Shawn Yarborough at WCK’s Primm Valley finale on December 9, 2009. (See “Ceremonial Combat at the Casino on a Cemetery” in Muay Thaimes®, Vol. IV, No. 1, Spring of 2010 on p. 25.) Between rounds two and three in that bout, ‘The Alien Fighter’ wasn’t just DQ’d but also suspended by NSAC, proving that there is some semblance of normalcy, even in Nevada.

Giovanni Moljo also patrolled the frontier of normalcy with his long day’s journey into night. Nothing in Giovanni’s performance even remotely resembled a professional kickboxing offense. Neither did he exhibit any capacity or willingness to defend himself, other than to cover up in the corner once Dom called his bluff. It took just an uppercut for Biondo to split the prankster’s gloves and to cash his chips.

Had Shakespeare covered this beat, he might’ve described a “player that struts and frets his hour upon the stage and then is heard no more [telling] a tale told by an idiot, full of sound and fury, signifying nothing.” (Macbeth, Act 5, Scene 5) Whoever brokered Moljo for this match shouldn’t expect Lou to take his call the next time he dials the phone.

With two new shows in New Jersey alone – Trinity Kickboxing Championships and World Class Kickboxing Championships – Glory/K-1 rules are on a roll. Whenever something like this happens, we should be mindful of another rule that makes fortunes on Wall Street: buy the rumor then sell the fact. The fact we should be selling is that Glory/K-1 rules are defined by what they’re not, meaning they’re not Muay Thai. In other words, Glory/K-1 kickboxing is Muay Thai without the clinch, elbows and sweeps.

Glory │ K-1 kickboxing is Muay Thai without the clinch, elbows and sweeps. Photo by Peter Marney for Muay Thaimes ®.

The message in this media is caveat emptor. Let the buyer beware. Don’t buy into a kickboxing contract, like Zaravkh Abashev did, without reading the fine print. After twice warning Zaravkh to refrain from Muay Thai sweeps, ref Vincent Chapple penalized the repeat offender a point for his third rule violation. Coming back with a judo throw, Abashev bought himself a DQ.

To cop a Rolling Stones quote: “You can’t always get what you want, but if you try sometimes, you just might find you get what you need.” What we need throughout this entire sport are more officials like Vincent Chapple, who reward our faith with their integrity. With Vincent on the job, we get “the best of times” at shows like Combat at the Capitale.

Combat at the Capitale

Nothing in Giovanni’s performance even remotely resembled a professional kickboxing offense. Photo by Peter Marney for Muay Thaimes ®.

So long as our law makers in Albany remain indifferent to the possibility that three blind mice could get voter ID’s, don’t lose any sleep over polling fraud. Some show producers play zero sum games with fans and fighters, because that’s really why they’re in it. Mostly it’s because that’s just all they know how to do. Thin skins seem to distract them from their dwindling attendance, commensurate with a general preference for not having to hold your nose.

If there’s any hidden logic in this algorithm, it is circular reasoning. Either settle for a vicious circle – which traps our cottage industry in tunnel vision’s circuit – or engineer progress into a conduit that actually develops careers for promotion to the Winners Circle. Although economics is value neutral, success usually comes to whoever gets it right. That is Lou Neglia’s secret sauce for the sweet taste of his success. Fans and fighters both savor this kind of flavor.