Destiny Waits on All of Us to Take Its Measure

There is a maple tree in front of my house. It is on a street that’s actually named for this native to the landscape. They’re both on a barrier island guarding the bend in Verrazano Bay, where New York City’s harbor meets the Atlantic Ocean.

With Hurricane Sandy’s storm surge, the Atlantic Ocean literally washed over this island. However deep down the maple tree’s roots go, they were soaking up salt water for weeks, until sea level subsided below Coney Island’s natural fresh water table. While water seeks the lowest level, an ocean apparently needs that much time to level out, at least from my personal experience between the Devil and the deep blue sea.

Like Hurricane Sandy, Glory 17 washed over Team U.S.A. on June 21, 2014: http://www.mmamania.com/2014/10/6/6919425/joe-schilling-shocked-glory-let-contract-expire-looking-forward-bellator-mma. Neither Joe Schilling nor Wayne Barrett came out of Los Angeles as worse for the wear, though, as fans’ appetite for Grand Prix elimination tournaments ad nauseum. 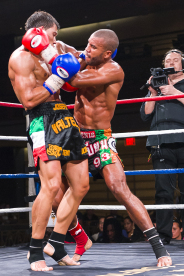 For all of the career development it’s taken us to produce two of the world’s top three cruiserweights [pound for pound, cruiserweights are the same as middleweights in Glory Sports International’s weight bracketing] bear in mind that there’s not much action – on the order of career development – in Canada outside of Calgary. So Canadians “Bazooka Joe” Valtellini, Gabriel Varga, and even Simon Marcus interned right here on the local circuit mostly at Justin Blair’s Friday Night Fights in NYC but also at Sitan Gym’s Take-On Productions.

If you recognize these ring professionals by name – through the media exposure they’ve gotten in Glory World Series – it’s a stretch nonetheless to grasp beyond your reach. So Gregory Choplin took “Bazooka Joe’s” measure in full rules Muay Thai (at Lion Fight VII on October 13, 2012) only to be ko’d himself a couple of months later by Yodsænklai Fairtex (at Lion Fight VIII on January 25, 2013).

How come some career prospects – that once seemed to be as promising as these rock stars – never made it beyond the local circuit?

Protect Yourself at All Times

I caught up with Adam McCann (Body Arts Gym in Philadelphia) this past September the 13th at Warriors Cup XXI in Rahway, New Jersey. The last time we’d been together was at Philadelphia’s landmark Alhambra, where he came within one vote of a middleweight amateur title that went to Vivek Narcami (Nova Martial Arts/Team Lloyd Irvin) on July 21, 2007.

It was like Adam’s career hit the pause key seven years ago. Time seemingly stood still for this once promising prospect – while he battled a demon that’s much more of an immediate menace to us than any remote sectarian conspiracy or even Ebola – both of which get more attention these days than the communal secrets we conceal to cloister our complacency.

Against Youyung Cho (Kings Combat Fitness in NYC), Adam McCann looked just as sharp recently as he did back then. If Adam has come back to us exactly where he left off seven years ago – as one of the better amateurs on the local circuit – success is never more than a contingency in survival of the fittest.

Speaking with me outside of NYC’s Broad Street Ballroom, where we’re going next, Adam seems now to have gotten his head back in the game. The most promising prospect for him going forward is an understanding that the demon he’s been battling can be subdued but never conquered. Rarely are life’s outcomes unequivocal, just like the split decisions bookending Adam McCann’s ring career these past seven years. 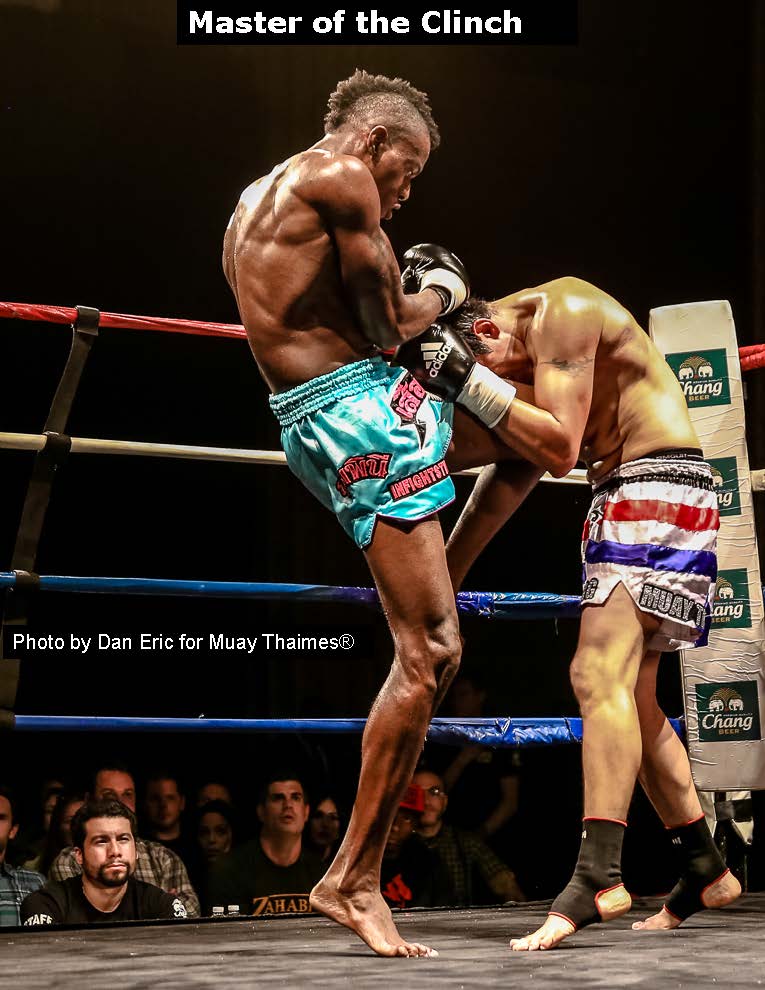 Elijah Clarke (Renzo Gracie in NYC) coincidentally began his own ring career in that same show seven years ago, where Adam’s was peaking. Elijah’s debut at the Alhambra was auspicious, with a first round tko of Dan Dacosta (Body Arts Gym in Philadelphia). He showed so much early promise that Justin Blair made him a regular at the Friday Night Fights in NYC.

The last time I’d been in the same house with Elijah – a couple of years later – was on March 20, 2009. He was no match for Preston Baptiste (M-1 Thai Boxing in Ontario). This promising local prospect took such a body beating in the Canadian’s clinch that the ref had to stop it in the 4th round. By then I’d gotten used to cold fronts from north of the border blowing through town and chilling so many hot local prospects. (See Muay Thaimes®, Vol. II, No.1, Winter of 2008, “Lament for Destiny’s Child”, pp. 4-5.)

It was an Apollo XIII moment │ “Houston, we have a problem” │ for Elijah’s ring career. Either Elijah would work out what to do about the problem, or he’d be stuck in a bad place. Probably the best advice Elijah could’ve have gotten at that time would have been to “keep your friends close and your enemies closer.” So he did.

The domain of rock stars. Photo by Ray Kasprowicz for Muay Thaimes®

Fast forward five more years. If ever the clinch was Elijah’s enemy, he has now become its master. With ample tradecraft to work his height and reach advantage, Elijah did a thorough demolition job on Georgi Samguin (Long Island MMA in Farmingdale) at the Broad Street Ballroom on September 19, 2014. So Elijah’s prospects look promising again, since the 2nd round ko of Gil Pinheiro (Team Thunder in Puerto Rico) in his professional debut – featuring full rules Muay Thai in NYC for the very first time – at Justin Blair’s Friday Night Fights on April 5, 2013.

Seven years after hopping a caravan from the Alhambra alongside Adam McCann for a date with destiny, though, Elijah Clarke continues to campaign the local circuit and to set his ring career’s compass on the horizon of a rookie who’s just gone pro off an 0-3-1 record since last winning on April 26, 2013. A reach that stops short of grasping beyond Georgi Samguin orbits a narrow scope, even as the frontiers of local landscapes all merge into a panoramic horizon. Such is the domain of rock stars like “Bazooka Joe” Valtellini, Cosmo Alexandre and Yodsænklai Fairtex.

However long it takes for an ocean to level out, prospect’s promise sooner or later subsides in nature’s stride. What we accomplish with our time in this life is the closest any of us can possibly come to mastering our destiny. How come some promising prospects never make it beyond the local circuit? There’s no one size fits all in human nature. It is the nature of some, like water, to seek their comfort level, while others are driven to become world beaters. Destiny waits on all of us to take its measure.

Nothing Ventured Is Nothing Gained

Because national rankings recognize the best in the business, Chris Kwiatkowski (Church Street Boxing Gym in NYC) needs only to affirm his tenure from time to time with a credible performance. This might explain matching him with James Martinez (Team Martinez in Albuquerque, New Mexico).

James probably has more ko’s on his transcript than Chris. Touring the local circuit these past couple of years, for example, James notched two more ko’s. He was ko’d by Joe Sampieri at the Friday Night Fights on August 16, 2013 and by Cyrus Washington at Take-On Productions on December 13, 2013. Chris Kwiatkowski completed the trifecta with a crippling low kick at the Broad Street Ballroom on September 19, 2014.

A match like this can’t possibly do more than muster the formation for a head count. His win moves Chris neither up nor down in the rankings. If he’d somehow lost to this caliber of competition, our native son probably shouldn’t be getting in the ring anyway with Coke Chunhawat (Pacific Ring Sports in Oakland) or Matt Embree (Siam #1 in Toronto). Between any pairing with these fellow travelers, on the other hand, it wouldn’t be a reach beyond his grasp for Chris Kwiatkowski to take either’s measure. Nothing ventured, though, is nothing gained.

Feast on the eye candy Ray Kasprowicz has to show you, along with Dan Eric and Chastity Cortijo
.