Climax of a Star Warrior’s Trilogy at Lion Fight XXV 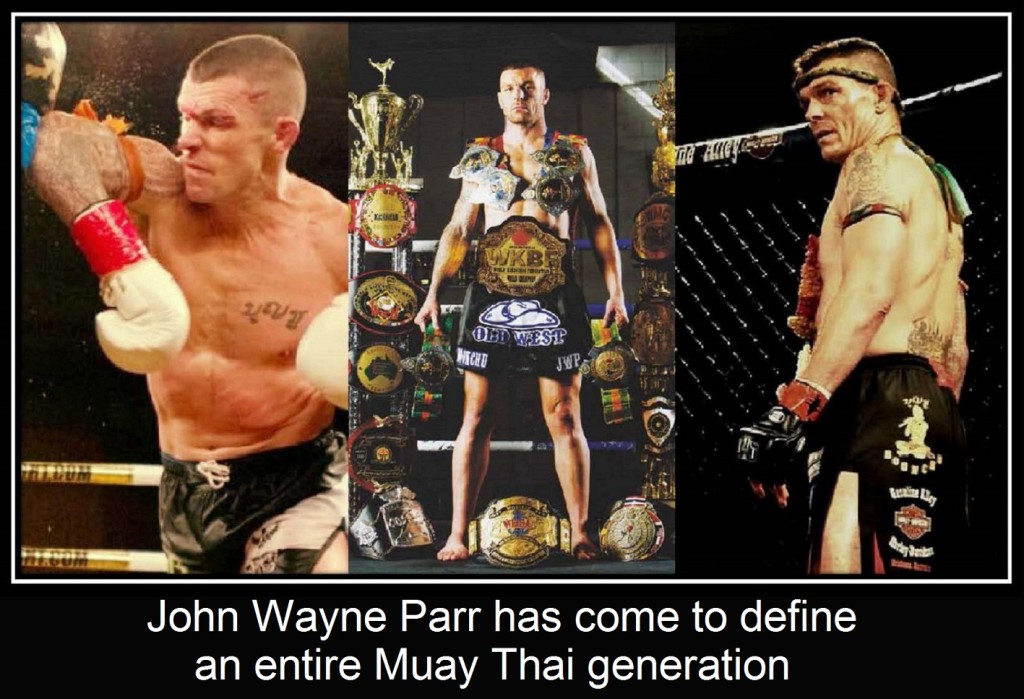 John Wayne Parr’s rivalry with Brazil’s legendary “Good Boy” goes all the way back to December of 2007. JWP won a unanimous decision over Cosmo on his Brisbane home turf in Australia. In their August of 2009 rematch – again in Brisbane, Australia – Alexandre took The Force in his stride with a series of hard low kicks. He stopped the Aussie with a TKO in the second round. Do the math and their star warrior’s trilogy has spanned nearly ten years.

Having suppressed a 2012 retirement impulse that went into remission 10 months later in 2013, John Wayne Parr profiled 300+ facial stitches in his California cameo. These were the battle scars of a 10 time World Champion, runner-up to Yodsænklai Fairtex in the 2008 Contender Asia – which he turned around in a hard fought 2010 rematch – and wins over a Who’s Who in kickboxing and Muay Thai. With titles dating back to 1992, the 15 year old child prodigy JWP would come to define an entire Muay Thai and kickboxing generation. 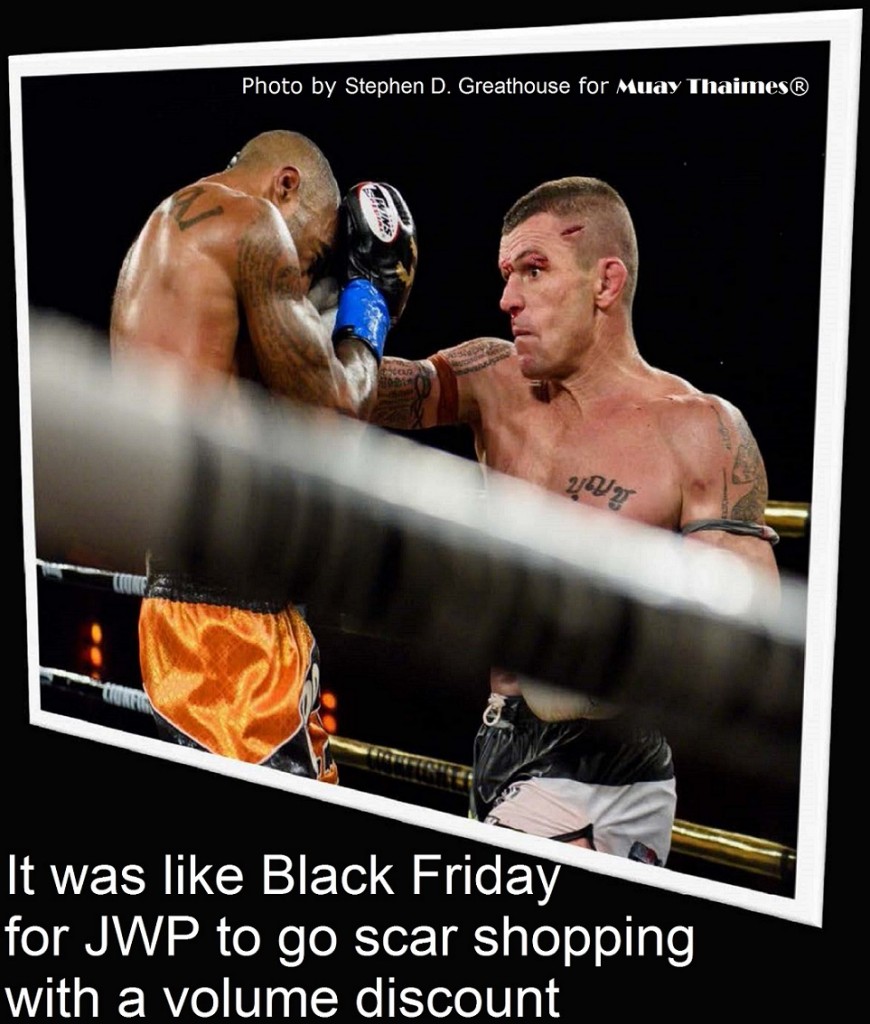 Himself a six time world beater – owning the belt from “Its Showtime” 2010 World Championship and the winner’s trophy from WMC King’s Cup December of 2009 Challenger Tournament in Bangkok – Cosmo Alexandre (51-17-1) came into the climax of this star warrior’s trilogy looking like the ripped world class athlete that he is.

Both star warriors had visibly trained hard for this day of reckoning between them. Six years back to the future, what better place to screen their final episode than an exit ramp off the Hollywood Freeway?

Despite almost exactly the same amount of beef on the hoof – with Cosmo at 166.4 lbs. and JWP at 166.8 lbs. – nowhere will you see more variability in muscle mass distribution. JWP looked solid and fight-ready at 5 feet 10 inches tall with an arm reach of 72.5 inches and a leg reach of 34.5 inches. At a ripped 6 feet 1 inch, Cosmo towered over the Aussie with an arm reach of 74 inches and a whopping leg reach of 40 inches. During referee Dej Sri “Nokweed” Ampai’s instructions at the center of the ring, Alexandre’s powerful athletic frame and build made him appear six inches taller and at least one weight division heavier than the bruiser from Down Under.

The opener was clearly a feeling out round. Parr spent a lot of it with his weight on the rear leg, while tapping his lead foot up and down. He missed several low kicks that were more flirtatious than promiscuous. Cosmo fired off some aggressive strikes with especially effective knees on the RSVP. Never shy to assert himself, JWP began to press the action. Alexandre got in some good if not especially damaging licks when they mixed it up, including a gorgeous Teep kick. He lapsed into passivity, though, during those gaps where Parr refrained from indulging the Brazilian’s preference for countering. Because JWP’s pawing low kicks and hook punches seemed short and slow against the athletic Cosmo, they didn’t score on the damage meter.

JWP started the second round more aggressively with a hard clinch. He fired off harder strikes and went for multiple kick-punch combinations. Even though Cosmo looked to be the more formidable athlete – without having taken any visible damage – he resorted to covering himself on defense and frequently retreated. Many of Parr’s strikes were short of actually landing. Still in all he pushed the action forward, while Alexandre lapsed for no apparent reason into passivity. About midway through the round, though, Brazil’s “Good Boy” came alive. A switched-on Cosmo Alexandre managed to trap JWP’s left kicking leg. Maneuvering the hobbled Parr into the corner, Cosmo launched into a spectacular left high flying knee. Although it made a forceful impact, the veteran Aussie was well guarded. He didn’t flinch and wasn’t injured. There then ensued several crisp singular but non-damaging strikes from Alexandre. The bruiser from Down Under kept chipping away aggressively in his siege style – moving forward with what appeared to be much shorter arms and legs – but he was unable to break down Alexandre’s countering defense to do appreciable damage. Standing 5 feet 10 inches tall, John Wayne Parr is no Super Middleweight runt. While appearances can be and often are deceiving, there was nevertheless an impression from their juxtaposition that made JWP seem short and tight next to the towering fluid muscular Brazilian. 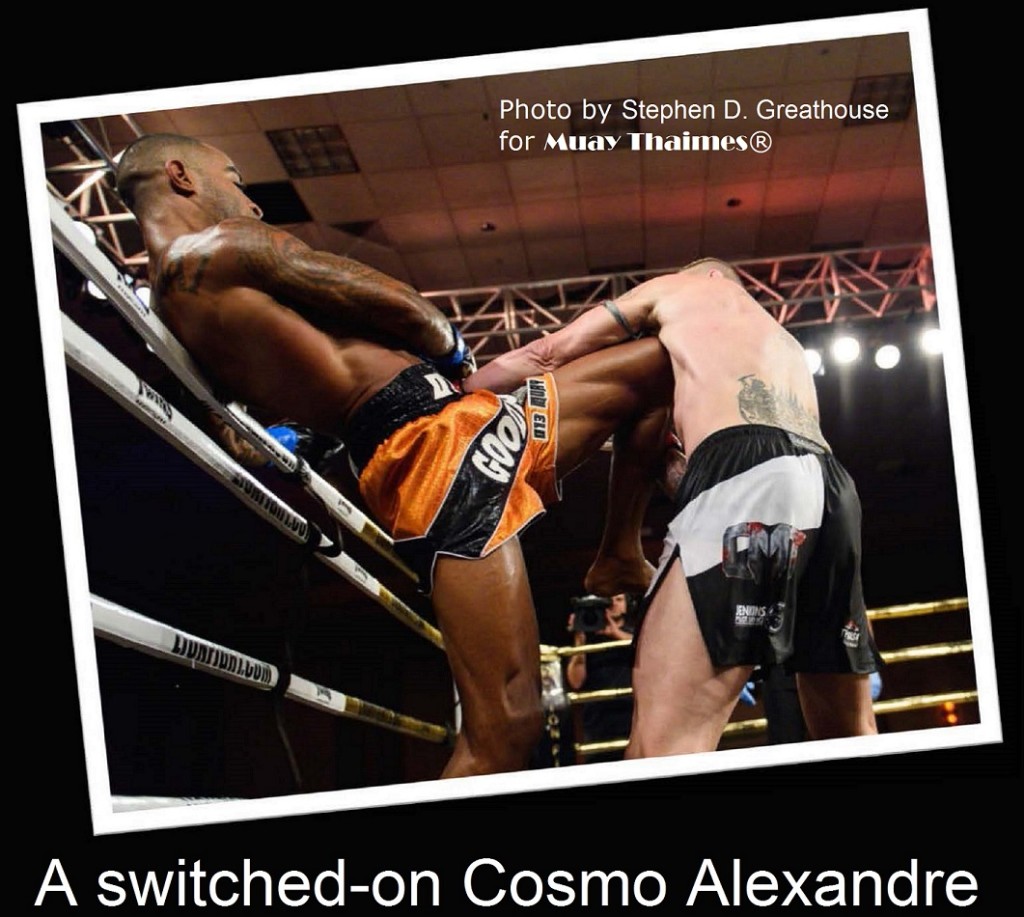 Cosmo opened the round with hard, single, roundhouse kicks that were crushingly effective. Parr maintained his aggressive battle tactics. Both fighters traded tit for tat. We then witnessed one of the stranger sights in this or any fight. Hopping on his rear foot while moving forward, JWP pursued a retreating Alexandre into the corner. With Cosmo’s back against the corner pads, Parr launched a 47-punch (count them) non-stop flurry of looping left and right punches to Alexandre’s arms, covered head, and body. Only the body shots really connected. None seemed even remotely to hurt him. Brazil’s “Good Boy” danced out of the corner when he was ready and laughed like it was all in the spirit Rio de Janeiro’s Carnival. Then Cosmo went on the attack. Ferocious elbows slashed JWP, cutting him in at least two places: over the left eye and on the left temple. Blood spilling out of another cut showed up between Parr’s eyes in the next round. Alexandre seemed content afterwards to dodge whatever bullets JWP had left with an assortment of hard counters. As seconds ticked off the clock, Parr appeared to be overwhelmed by his larger, athletic assailant. He was taking significant bloody damage. 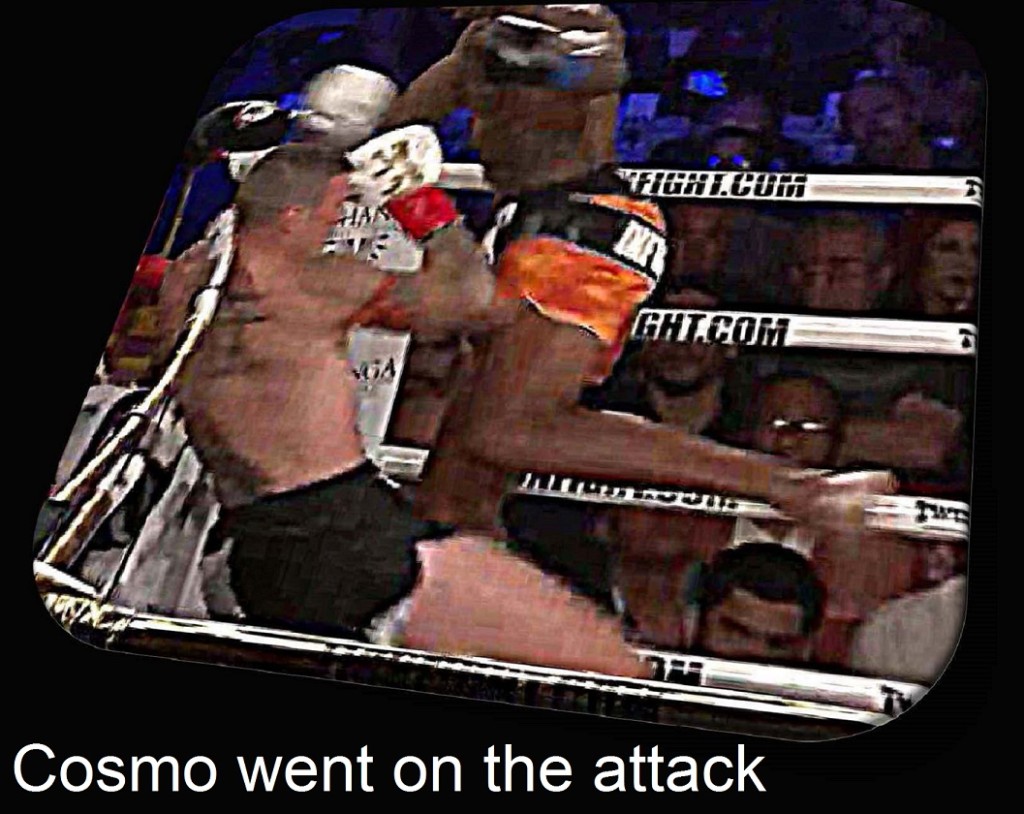 Trading low kicks, Parr took one on the knee that seriously buckled his leg. Cosmo transitioned into clinches that were launching platforms for an artillery fusillade of explosive elbows. It was like Black Friday for JWP to go scar shopping with a volume discount. The bleeding Parr was all grit, no quit. While active and aggressive, he just wasn’t effective and ended up backed into a corner. In another truth is stranger than fiction sequence, Alexandre combined a haymaker with an upwardly mobile left knee. JWP countered with a wild overhand punch. It seemed to land on Cosmo’s left temple, jarring his head awkwardly. For some strange reason, Alexandre then stopped fighting. He looked around at the floor, as though a contact lens had fallen to the canvas, seeming to expect Parr and the Referee “Nokweed” to help him find it. Huh? Dej Sri Ampai took no more time to unwrap his surprise than any kid would recognize trick from treat on Halloween. He restarted the action right away. Cosmo seized the moment opportunistically to punish Parr with a volley of knock-knock-who’s-there elbows and punches. JWP battled valiantly throughout this onslaught, but the bigger Brazilian’s physical dominance was manifest. He had too much strength perforce for the smaller though well-conditioned and courageous Australian. With about 45 seconds to go in the round, Cosmo clocked Parr with a low left hook that would have dropped most fighters irrespective of weight class. Alexandre finished the round with more jumping knees and hard elbow strikes that drove home the message that he was in the driver’s seat on this date with destiny. 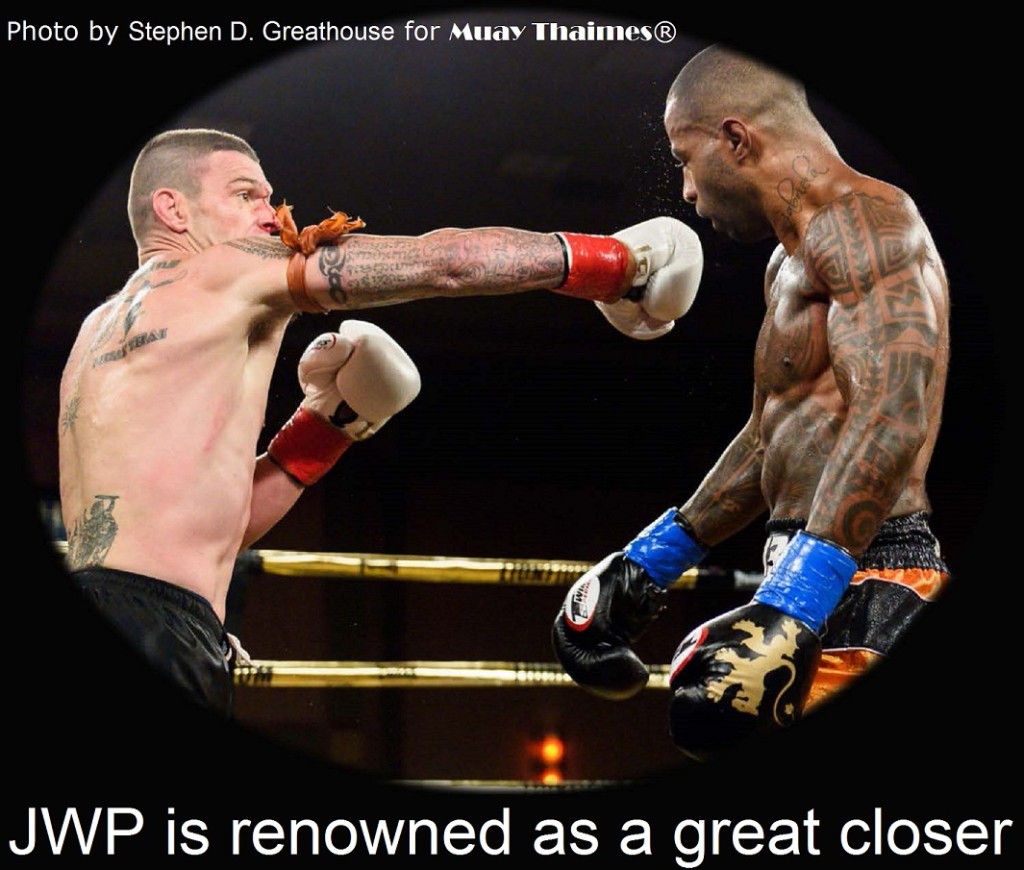 Going into the final round, it was a no brainer that John Wayne Parr needed a walk off to salvage a win. Alexandre started the round instead with deft movement, strength displays, jumping knees, and rock-around-the-clock kicks. Still hard fighting but bleeding and injured, at this point, JWP seemed even shorter in stature than before on the order of two weight classes below Cosmo. Alexandre clobbered him with high speed round kicks, sharp elbows, and crushing body punches. About half way through the round, though, Parr unloaded a punch that had game changer written all over it. The Hail Mary rattled Cosmo’s rosary where cobwebs come from. It seemed to stun him. The resilient bruiser from Down Under seized this opportunity to detonate some of his most explosive bombs of the night. Renowned as a great closer, Parr went for the kill. Alexandre’s mouth was wide open. He was clearly gassed, while the bloodied JWP incredibly seemed to be invigorated. Cosmo dug down deep. He managed to smother the smaller Parr with his body, thus using up the remaining time. The Brazilian star warrior also let go some wild, winging punches. They didn’t connect but ate up time. Once again, Cosmo Alexandre took The Force in his stride. He rocked JWP with a wild right hook and followed it with a left uppercut. Both scored big time. “Good Boy” that he is, Cosmo effectively killed the clock along with Parr’s prospects for a walk off. 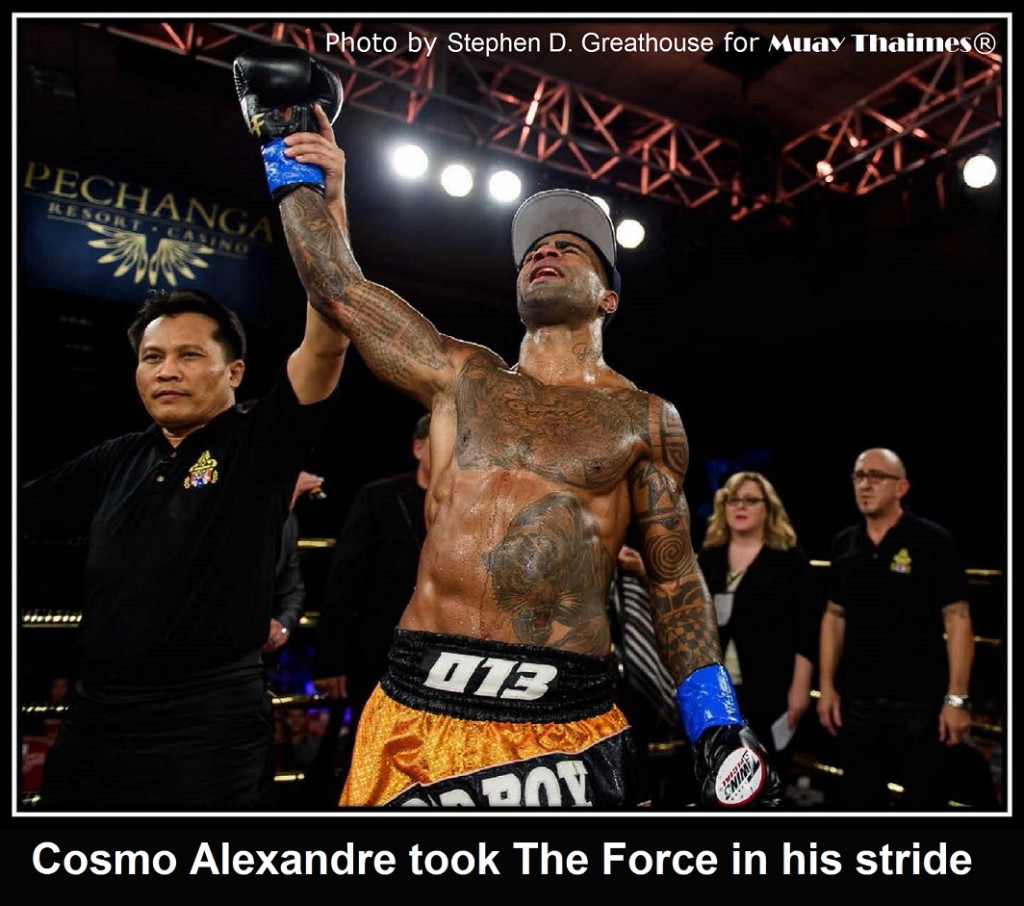 The star warrior’s trilogy was over. Jedi knights are bound together by The Force. Who wins or loses is just plot in a Muay Thai drama.