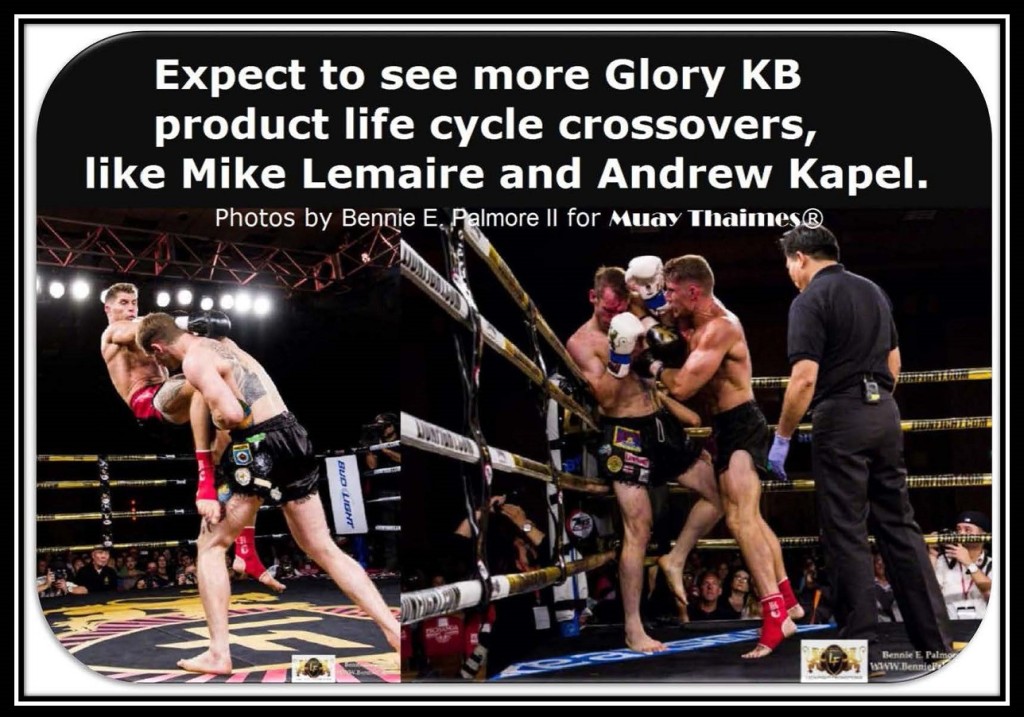 How ironic is it for Kevin Ross to cameo the undercard of a show headlining Malaipet “The Diamond” Sasiprapa? Let’s remember it was Kevin’s win over Malaipet that earned his primo status on North American soil, after avenging a Beijing loss to Kang En then beating Phanuwat ‘Coke’ Chunhawat and Chike Lindsay-Ajuda in a remarkable four month winning streak.

The prototypical underachiever of our generation, Malaipet’s pacing Ross at the finish line testifies to superior natural talent and consummate skill, as evidenced by his performance tonight against one of the best in the business. It was neither natural talent nor consummate skill, though, that set Kevin Ross apart from Malaipet but rather fire in the belly. This is why a chronicler of the sport often differs with the judges. Legacy will almost certainly affirm that heart matters and Kevin Ross rocked. 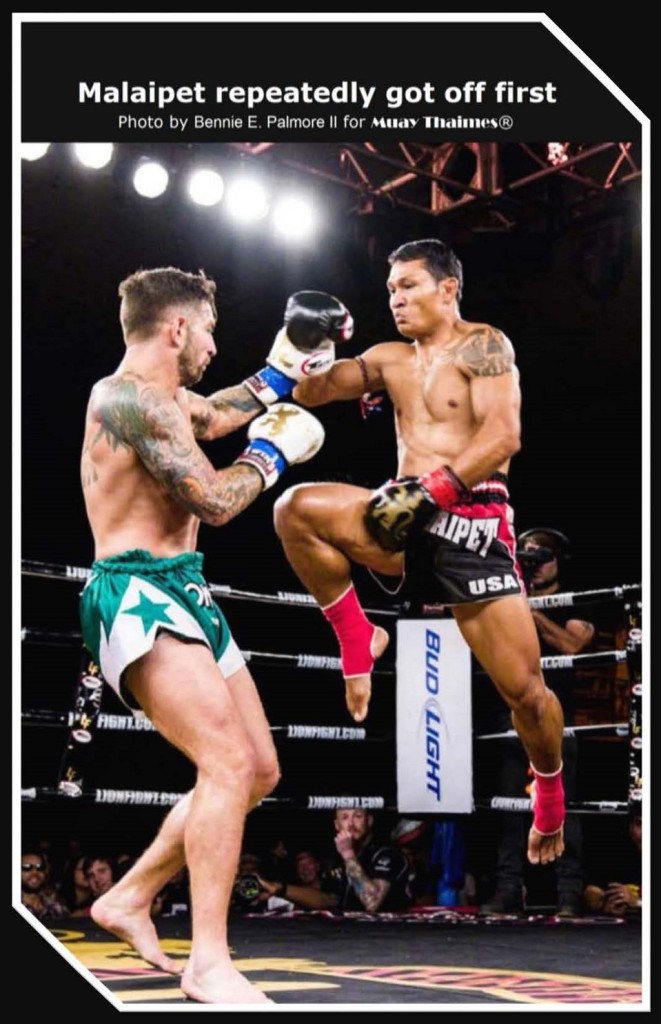 Lion Fight XXIII at Pechanga Resort ♦ Casino in So-Cal featured the veterans Malaipet Sasiprapa (146-29-6) and Liam Harrison (80-16-2 with 38 KO’s) on July 31, 2015. Each came into the fight with a generation’s worth of competitive success. Harrison has been at it professionally 15 of the 29 years on his birth certificate. Any step either might’ve lost, despite Malaipet’s having clocked more laps around the track at 33, has only brought them closer to parity in the world’s Welterweight rock star pack. Although both have been crowd sourced past their career peaks, pack leaders like these set the pace for herds to follow. So it was at this premier American show’s main event.

Based upon their past performances, odds makers gave Liam a distinct edge going into the fight on the massive velocity of his low leg kicks and the sheer ferocity with which he fights. In addition, Malaipet reportedly came into the fight with a healing broken right hand. Rarely training more than a week for any fight, Malaipet often begins to fade in the third round. To most observers, thus, it looked on paper like this should easily be Harrison’s night. Malaipet reportedly trained two months for this fight, though, and was in the best shape of anyone’s memory. Both fighters entered the ring looking fight-fit and completely ready. The referee was 2x Lumpinee champion and 5x Muay Thai world champion Coban Lookchaomaesaithong. 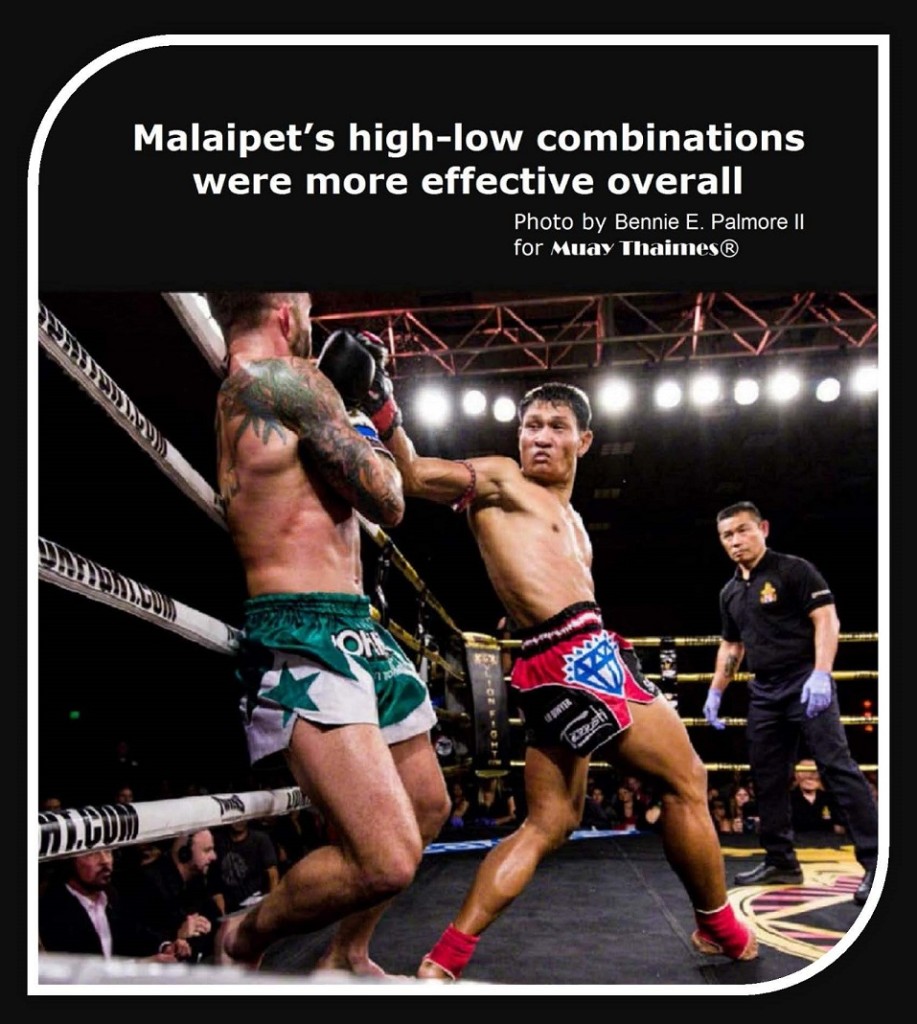 Off first bell, Malaipet repeatedly got off first, even when moving backwards. He fired front push kicks in volleys to Liam’s mid-section, also whipping high-velocity low round kicks. Harrison came across more passive, aiming to counter and occasionally doing so with his own hard low round kicks. Malaipet’s trademark cocky smirk and mocking antics towards his opponent, especially after having taken a hard hit, were apparently lost on the no-nonsense Harrison. Liam was consistently willing to catch and take the thrust of Malaipet’s round kicks in order to counter with highly effective low round kicks. Malaipet clearly won the round. Malaipet 1, Harrison 0.

In the second round, the British legend became visibly more aggressive. He maneuvered Malaipet back into the ropes time and again. Malaipet’s excellent conditioning and physical strength were manifest, though, in this round. He defied being pushed around by the forward moving and aggressive Harrison. Early in the round, Malaipet seriously rolled his left ankle. There was a stop in the action, but he somehow managed to shrug it off. They both got off numerous high velocity low round kicks, along with occasionally effective body punches. Because Liam relied mostly on countering low kicks, Malaipet’s high-low combinations were more effective overall in this round. Malaipet 2, Harrison 0. 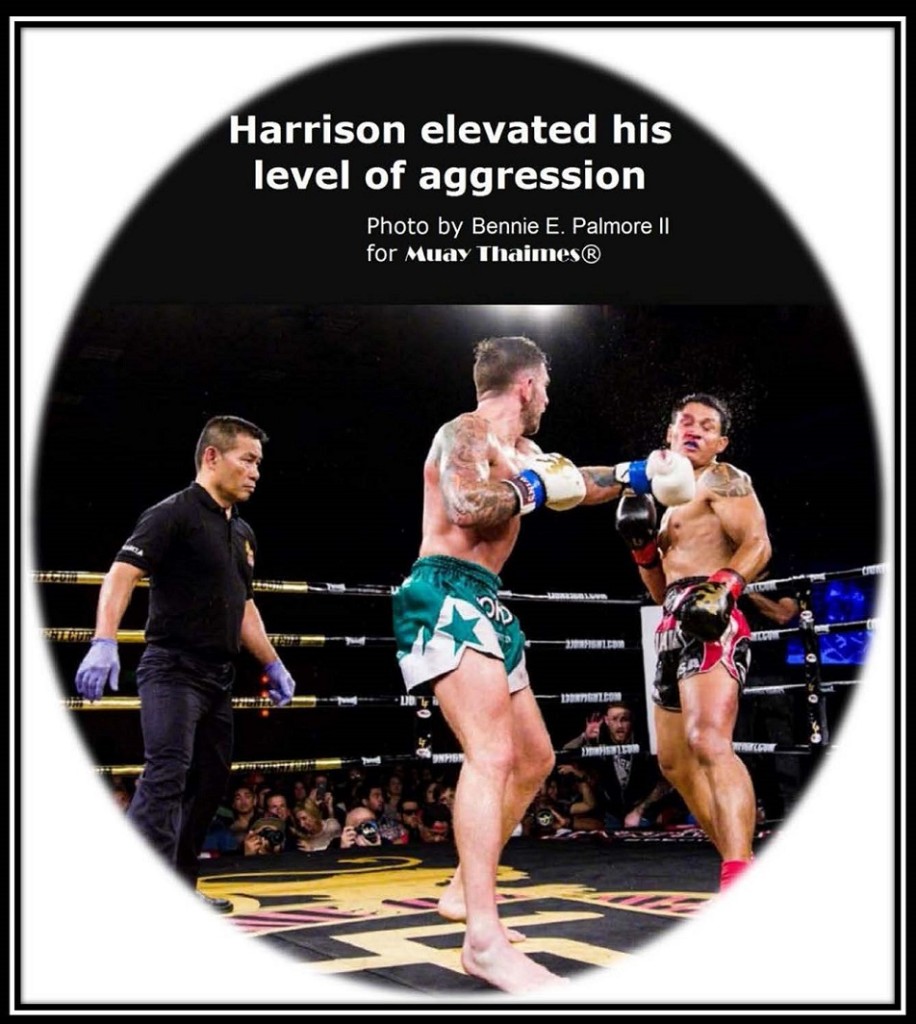 In the third round, Harrison elevated his level of aggression. He consistently moved Malaipet backwards and along the ropes. Harrison had Malaipet moving in retreat for most of the round, while scoring combinations of hard punches and low round kicks with expert precision and speed. Although Malaipet looked a lot less commanding in this round, he was definitely not fading as in so many of his past fights, for which he’d only trained seven days. Liam’s entire left side was bright red at this point from Malaipet’s round kick torso attacks. But it was clear that Harrison won the round, despite Malaipet’s last second assault with high kicking aerobatics that missed, leaving him tangled in the ropes at the bell, as Harrison walked triumphantly away. Malaipet 2, Harrison 1. 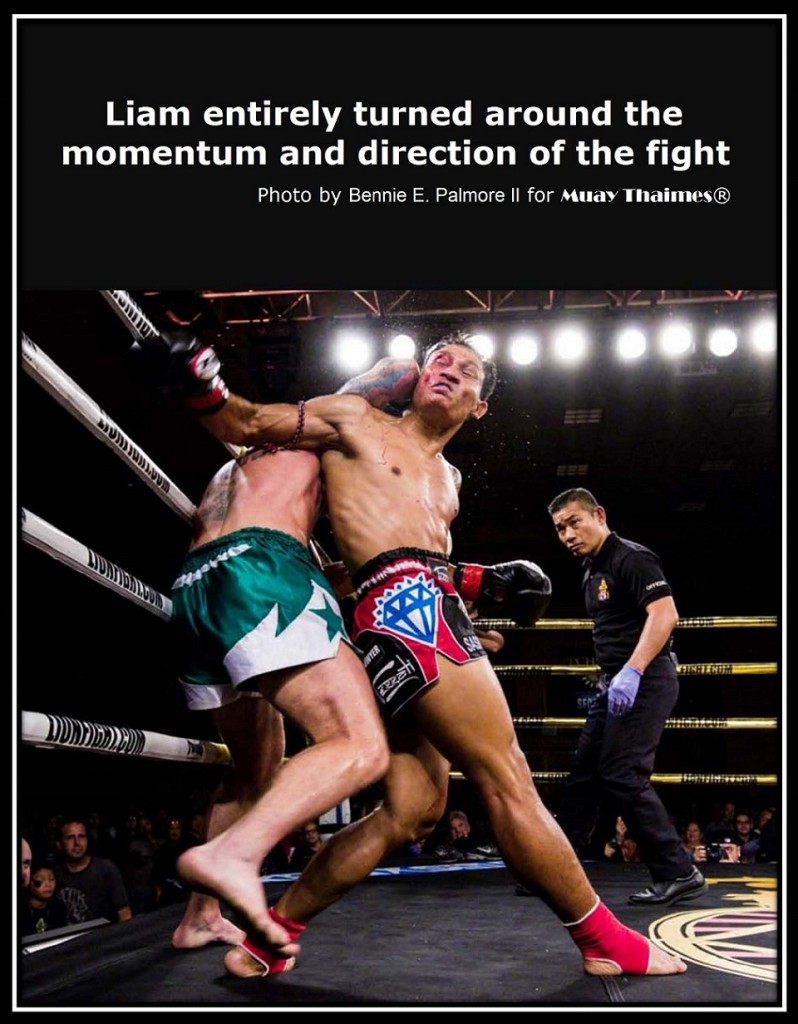 In the fourth round, Liam entirely turned around the momentum and direction of the fight. Harrison consistently bombarded his opponent with high and low hard shots, all the while frustrating Malaipet’s own assault. Several punishing strikes later and Malaipet’s whole smirky expression transformed into one of total seriousness. At about one minute into the round, Malaipet’s reckless forward charge put his right eye brow on a collision path with Liam’s perfectly positioned, waiting, elevated left elbow. It slashed Malaipet’s right eye brow open. Harrison immediately rejoiced. He pointed at Malaipet in scorn – possibly in response to Malaipet’s frequently disdainful show-boating. The ringside doctor stopped the clock to examine Malaipet but let the fight continue. For the rest of the round, Harrison turned up the heat, maybe sensing some desperation in Malaipet, who was getting wild with his strikes. Midway through the round, Liam caught Malaipet’s mid-level round kick and cut-kicked him into a human pinwheel. With both fire and blood in his eyes, Malaipet now tried to resurrect the round, but it was all Harrison’s skill, speed, and command between the ropes. Malaipet 2, Harrison 2.

Going into the fifth round, the fight should’ve been dead even on the score cards. Trading strikes initially, neither fighter managed to dominate the other. When Liam backed off momentarily, Malaipet delivered a series of non-damaging but scoring strikes. He caught a left, mid-level round kick and cut kicked Harrison hard to the mat. Obviously motivated from that point on, Liam became very difficult for Malaipet to hit, at the same time punishing him at will. A sudden jumping right-left knee to Malaipet’s upper body rocked him decidedly rearward, but he recovered and returned to find Harrison at the ropes. With Harrison in a defensive posture, Malaipet got off a reciprocal jumping knee but without effect. From that point on, Malaipet chased Harrison around the ring but was unable to catch him. Harrison evidently thought he had won both the round along with the fight and was avoiding any further contact. This round was by far the closest of the fight and the hardest to judge a winner. Given that there was not a clear differential in damage (the top priority round scoring criterion according to the Sports Authority of Thailand Paragraph 15.1), one would then have to go to the SAT’s second hierarchical criterion, which is Power. In this round it appeared that Harrison delivered the harder strikes between the two fighters, but that opinion could clearly be debated. Malaipet 2, Harrison 3.

When the decision of the judges was announced, it was Harrison by Split Decision. 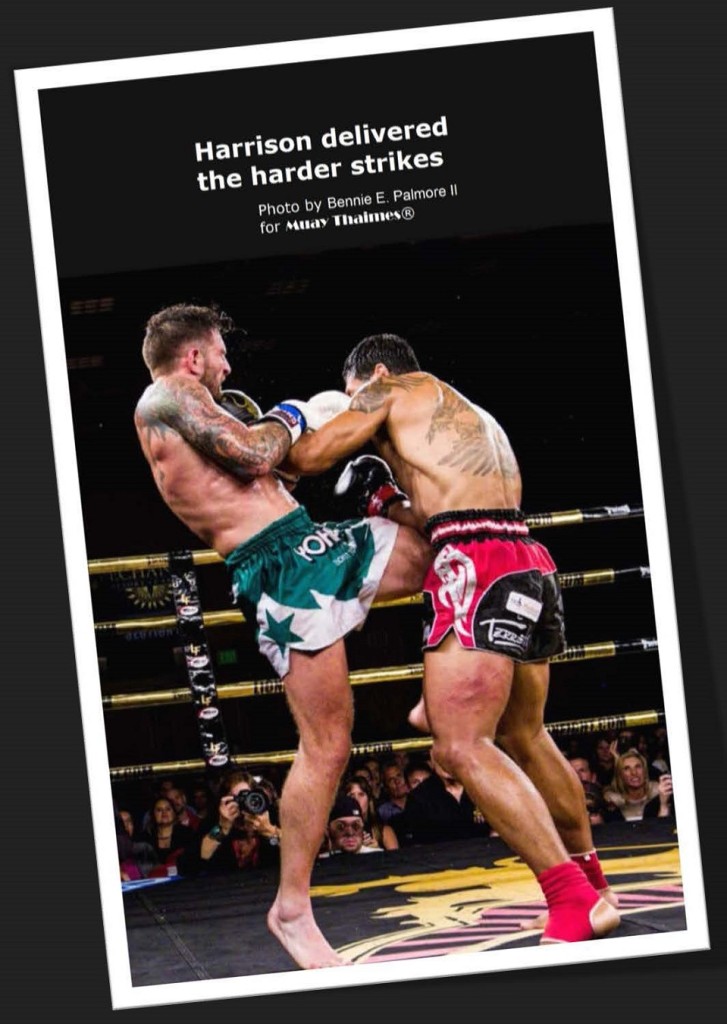 Using the flawed 10-Point must system (essentially having five different fights scored independently with 10-9’s), it was a hairline close decision that came down to an opinion on the last round. Overall, Malaipet came into this excellent, action filled fight in the best condition in memory. Although he did not appear to be the same ferocious fighter of some three or four years ago, Liam Harrison’s average fight was good enough on this night. Both fighters exhibited heart, skill, speed, and endurance. The dynamic combination of fighters and promoter made this main event of America’s premier Muay Thai show a milestone in two iconic careers.

Despite consistently demonstrating excellent Muay Thai technique, which was originally ingrained in him at Master Toddy’s legendary gym in Las Vegas, the reach of Kevin Ross’s heart and courage have often exceeded his tactical grasp in ring performance. Lapses in Kevin’s defense have subjected him recently to appalling punishment from the Gladiator’s Gallery of world class Muay Thai fighters. The time is obviously approaching for Ross at age 35, when he’ll have to hang up his gloves. Notwithstanding Kevin’s location on his career GPS, Rungrat Sasiprapa, at the tender age of 19, would at first glance seem to be an odds maker’s underdog to the vastly experienced Ross. Out of Bangkok in Thailand with so many superb fighters in the weight brackets proximate to 140 lbs. and with a reported history of 120 previous fights │ 3x the number of Ross fights │ Old Man River meets its destiny in the deep blue sea. 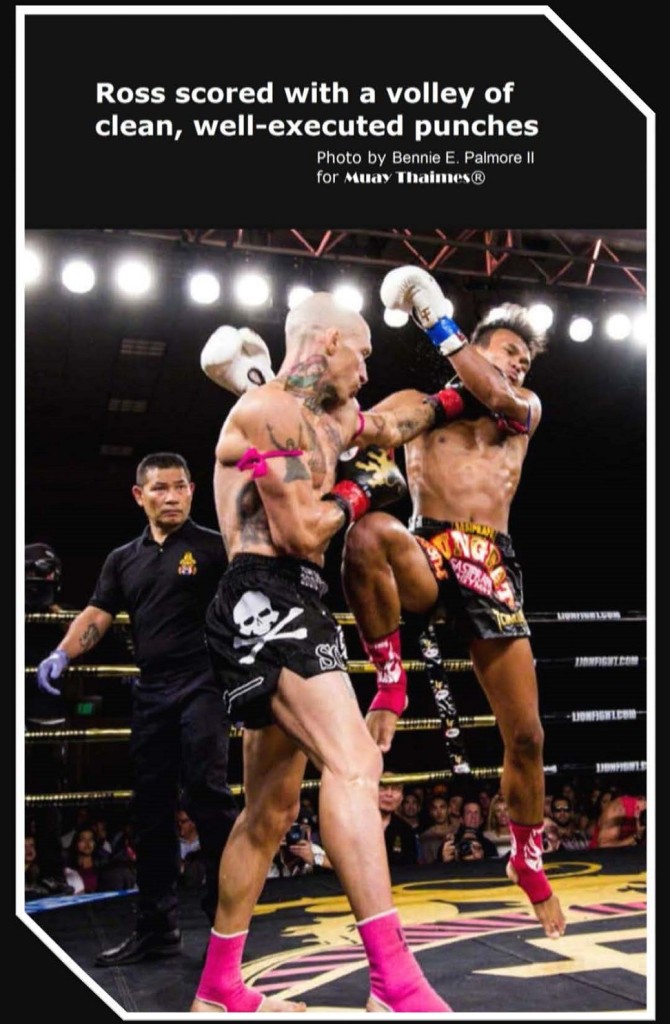 Midway through the first round, Ross scored with a volley of clean, well-executed punches high to Rungrat’s undefended head. With both hands held oddly at waist height, Rungrat went solely for body punishment off hard round kicks to Kevin’s torso and ribs, disdaining the score cards in retrospect for an eventual kill. Anticipating first bell, the American made effective use of his reach advantage to pummel Rungrat with high punches almost at will. Ross was on track for a decisive win after the first round, if he could’ve stuck to this script. 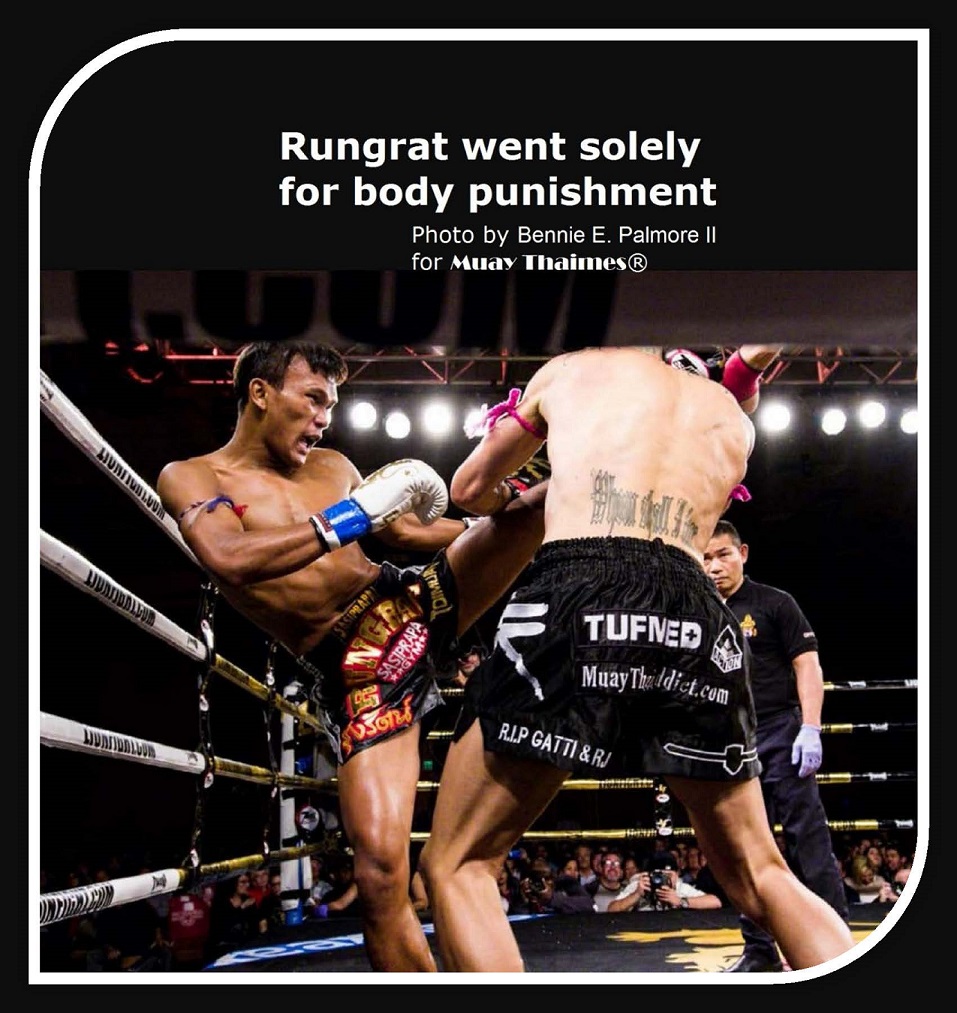 In the beginning of the second round, Kevin misguidedly ditched his winning long range boxing tactics. Going inside to a clinch, instead, he challenged Rungrat’s vice like grappling strength. The python strangles its prey without punches, elbows, or knee strikes. Off an exchange of elbows, once again, as in his recent fights, Ross suffered a cut on his forehead that bled profusely. Smiling through the now familiar blood bath but apparently still lucid and unhurt, Kevin went to engage Rungrat, after a break by the referee. He launched into a spinning rear elbow that missed. After the rotation, he ended up defenseless: facing away and tilted downwards. The defensive lapse exposed him to a crushing 12-6 right elbow that ricocheted off his head into his right shoulder. Rungrat immediately followed with a brilliant upward left knee to Kevin’s exposed chin. Ross went down hard. He was clearly in trouble. Pouring blood again, Kevin regained his feet and assured the referee that he was prepared to continue. Rungrat met him, after the count, in the center of the ring with a jumping left knee to his exposed chin. Kevin hit the canvas hard again. This time he was down and out and not getting up. Coban stopped the fight at 2:13 in the second round with Kevin Ross writhing on the canvas. 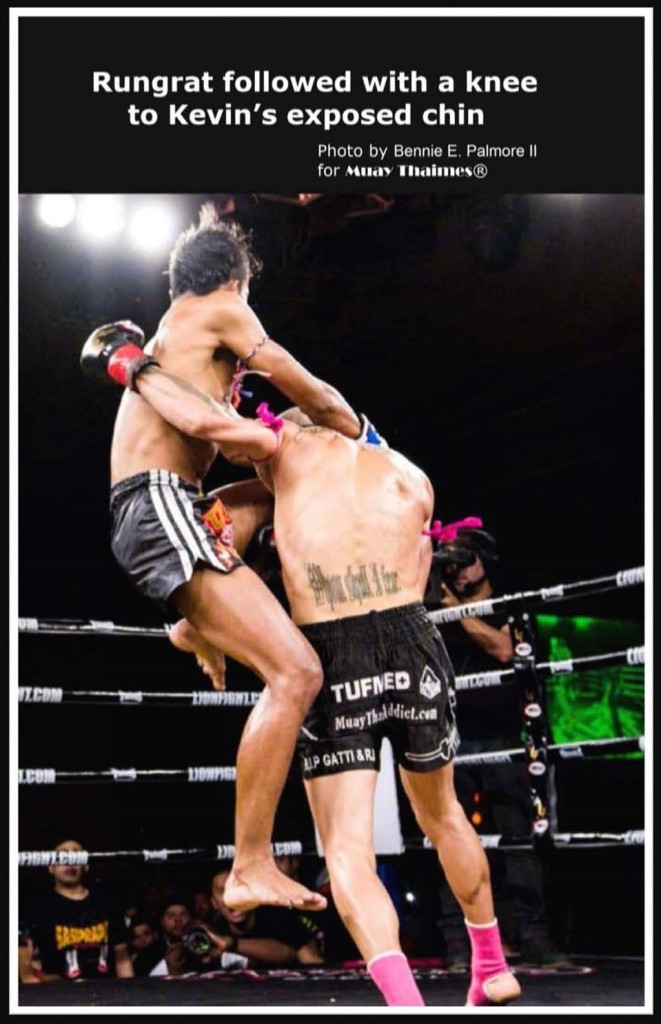 Once again, Kevin’s aggressive instincts undermined a sensible battle campaign. He defaulted to his old habit of challenging an opponent’s strength and ditching a winning formula for a losing one. No way should Ross have abandoned his outside winning fight for an inside losing one. Defying Rungrat’s well known inside strength exposed the vulnerability inherent in doing battle without a sound defensive formation. “Invincibility lies in the defense; the possibility of victory in the attack.” [Sun Tzu]

Lion Fight’s C.E.O. Scott Kent maintained his own primo status on American soil with the kind of matching making that none of his NYC competitors even try to approach. So it was that Tiffany Van Soest successfully defended her Lion Fight Featherweight title against Poland’s Martyna Krol. Like a vintage wine, Romie Adanza just keeps ripening with maturity, popping the cork on a youthful Daniel McGowan from an island kingdom that we here call “The Old World”. Expect to see more Glory KB product life cycle crossovers, like Mike Lemaire’s, who went two for two with Andy Kapel. Victor Saravia and Marvin Madariaga both made short work of competition that’s got a history of producing these kind of results, which is another way of saying “all’s well that ends well”. Here are the full results: 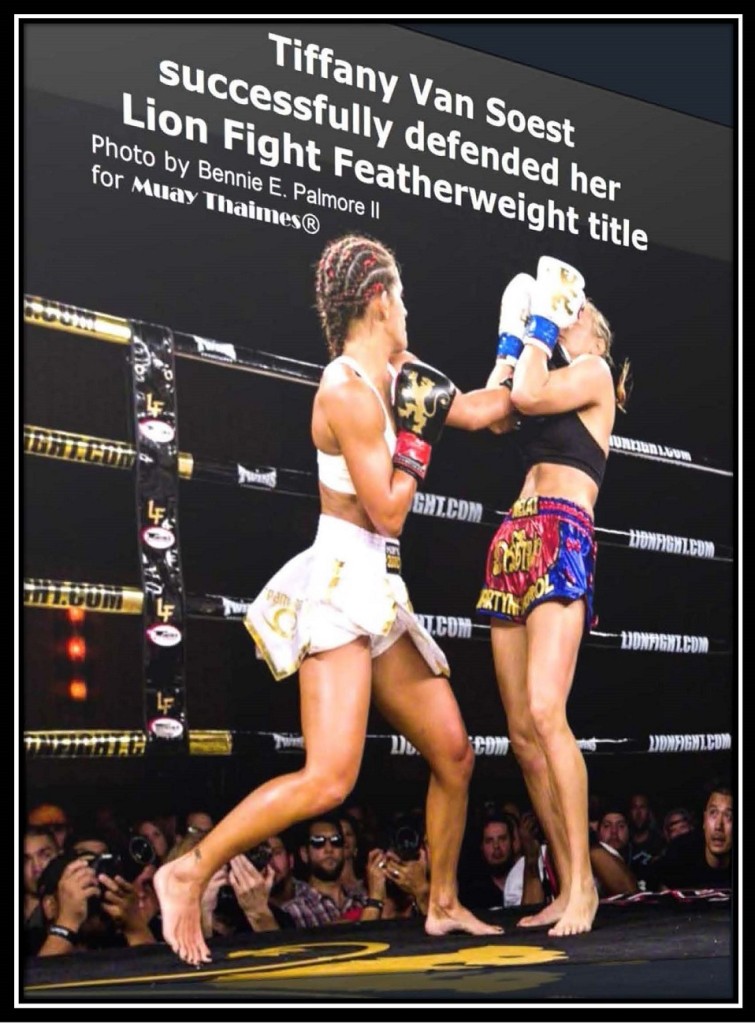 Marvin Madariaga def. Tony Fausto
by TKO (Strikes) in Round 1. 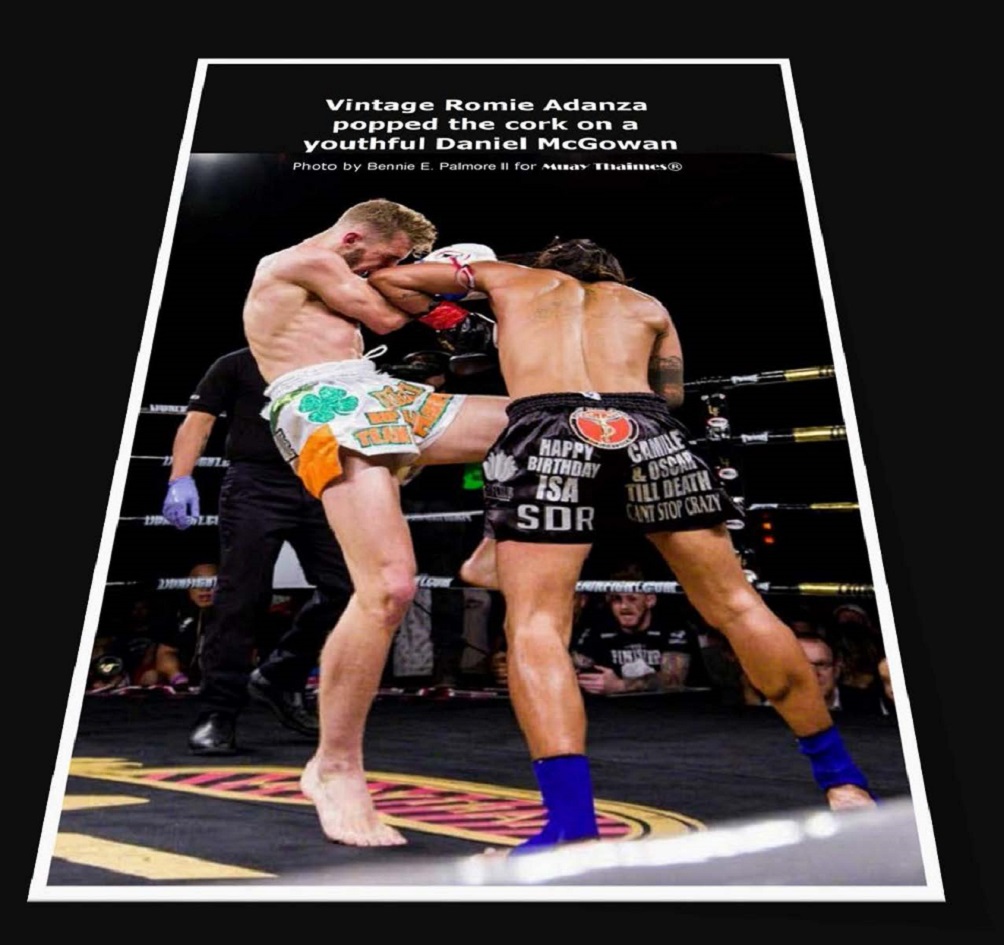