FIGHT TO THE FINISH IN CALGARY

On Friday January the 24th, Mike Miles Productions opened 2014 with the presentation of Challenger MuayThai Fight Series 9 – ‘FIGHT TO THE FINISH‘.

The event was sold out again, turning away several hundred people at the door. Mike Miles Promotions is searching for a larger venue to host these events in. 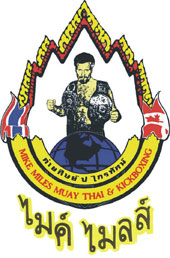 As the athletes entered the ring, the Japanese athlete was taller, well-muscled, and had long arms for his size. Dawodu looked well-muscled and fit to fight as well. As the bout opened Dawodu was to attempt his opening front flying push kick but the Japanese athlete was not to be there. As the two started moving both men looked sharp with the Japanese providing a tight and strong defense picking off the majority of the Canadian’s attacks. About a third of the way into the round Dawodu landed a vicious left body hook that visibly hurt Hirai. Dawodu could smell blood and started pressing the Japanese athlete to the ropes with a flurry. A head shot knocked Hirai off balance and Dawodu stuck another huge left body hook in with a resounding thud in the venue, dropping the Japanese athlete to the canvas for the count and beyond. The result was 1st Round TKO for Hakeem Dawodu.

Dawado (left) sets up Hirai for the finish

This was a big fight for both athletes. Bragging rights and a boost to the future and direction of these athletes in Japan was at stake on the outcome of this bout. The Canadian athlete won it, opening more doors of opportunity for him in Japan. The Canadian fought in Japan in November and had a great scrap with a well-known Thai athlete (Gunapper Weerasakrek), eventually seeing the Canadian win by KO in the 3rd.

What is next for Dawodu? He ventures into MMA in February. He has been looking for big MuayThai fights in North America and really (emphatically) wants to fight Malaipet Sasiprapa, Kevin Ross, Sean Kearney and Matt Embree. Hopefully he will not have to wait long.

MacKinnon stepped into the ring for his second Professional MuayThai bout. His opponent Waterhen was the veteran of 30+ professional bouts, but all having been in an MMA cage. Waterhen is a former King of the Cage Canada Canadian Champion. As the bout opened, MacKinnon started fast off the line and landed some solid shots, while Waterhen’s experience blocked and parried many of the head kicks and low kicks. In the second round, a knee caught Waterhen in the head. MacKinnon poured on the pressure, but the cagey Waterhen parried the attacks and recovered. He then pressed MacKinnon, who started to show some fatigue and stepped up his work rate. In the third round, Mackinnon settled down and connected with some hard punches and kicks, while Waterhen countered defensively. At mid point of the round MacKinnon forced Waterhen into the corner. He delivered a spinning back kick, which caught Waterhen in the liver. Waterhen went down for the count. Mackinnon said afterwards that he’d had a difficult time dealing with the strange rhythm of the MMA athlete. Mark MacKinnon was declared winner of the bout by 3rd Round TKO in his second professional match. 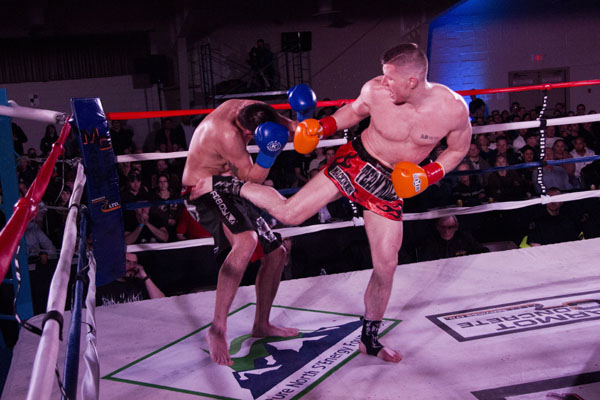 Scott MacKenzie (Calgary/Miles) vs. Shigemune Omori (TSK Japan)
The bout opened with Omori on the outside, moving and throwing single shots at MacKenzie. Omori was having a difficult time trying to catch the Canadian, who moved backwards as soon as the Japanese athlete came at him. In the second round, MacKenzie settled down in his stance but still looked like he was trying hard for a knockout. Omori fought back but was dropped several times in the round. In the third round MacKenzie, got his rhythym and managed to force Omori back into the ropes. He landed knees and elbows. MacKenzie’s aggression was too much for Omori, who went down for a final time in the third round. Scott MacKenzie was awarded the win by 3rd Round TKO.

When both athletes entered the ring, the most striking difference between the two athletes was their size. “It is so hard to find juniors in the same weight division with comparable experience. Ethan usually fights at a division or two lower than this weight. However, I was having difficulty finding him and opponent and Rino (Belcastro, Laramie’s coach) contacted me and we took the bout,” said Mike Miles. The opening of the bout saw Laramie dictate the pace. Doucette landed some solid kicks, but Laramie pressed through and landed some very strong punches. Laramie was very aggressive in the clinch, using his skills to out-muscle Doucette in the clinch. In round two, Laramie again dictated the pace. Doucette fought back but hesitated to pull the trigger. Laramie landed some very strong body shots. Doucette was shaken at the end of the second round. In the final round Laramie pressed forward and, as the round progressed, Doucette resorted to the shell. Laramie pounded him with body shots and head combinations got the referee to halt the bout. Todd Laramie won the bout by 3rd Round TKO. A bright future star, he also won the Willie Williams Memorial Best Out of Town Fighter Trophy.

Weigel was originally slated to face a different opponent but, due to weight discrepancies, this Sandhu took the bout. It was an exciting bout for the fans, see-sawing back and forth between two game fighters. Sandhu was explosive on the outside. Weigel countered effectively throughout the bout. Sandhu tried to stay on the outside in order to exploit his height advantage. Most of his shots were wide and none had Weigel in trouble. In fact, Weigel walked through the majority of shots that he took. To Sandhu’s credit, he stayed out of the clinch and nullified most of the clinch game. Weigel pitched Sandhu to the ground twice, prompting Hasman to retaliate once. The bout was close with Hasman Sandhu winning the Decision on Points. 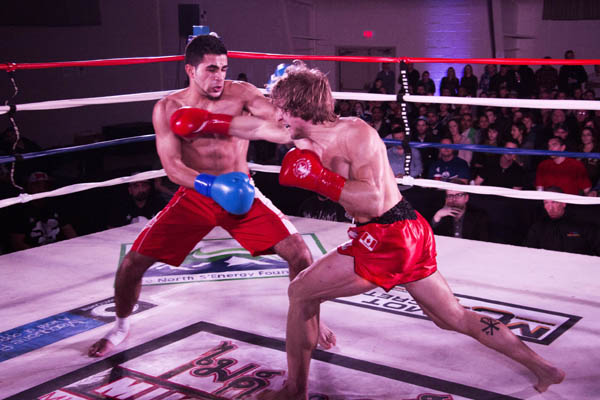 Going into this event, Quinn had three prospective opponents pull out on her. The lightest prospective bout was at 115 lbs. Taking the fight on short notice, Kru Dar offered up his 2013 TBA World Class Novice Champion Sarah Hoedlmoser. Quinn thus had to move up 130 lbs. for the bout. Both athletes started off the fight landing aggressive shots. Quinn had to reach, as she was six inches shorter. In the first round, Quinn was the more aggressive of the two, though Hoedlmoser protected well and answered with some beautiful kicks. Heading into the second round, Hoedlmoser picked up her work rate too. Towards the end of the round, Hoedlmoser, worked her knees in the clinch. It was effective. Quinn was having difficulty dealing with the clinch, which Hoedlmoser applied to keep Quinn away from grabbing the body to nullify the kicks. The final round was for the win. Both met in the middle of the ring. They exchanged furious punches and kicks, each trying to answer the other’s. Hoedlmoser added in some great long range knees in the middle of the round, and that won the bout for her. This was a great action-packed bout from the only women’s fight of the event. The win was awarded to Sarah Hoedlmoser from Kru Dar’s in Toronto.

A few weeks before the event was to take place, there was a shuffling of matches due to pull-outs and add-ins. This match was originally supposed to feature Weigel against Nguyen, while Collins was supposed to fight Sandhu. To accommodate the huge weight differences, a decision was made to shuffle these two bouts around. Collins fights around 135 lbs. but went up to 147 lbs. to take the match. Stepping into the ring, both athletes looked fit, though Collins did seem smaller in stature. Nguyen has worked really hard on his boxing, and it showed in this bout. Collins could not find his range and, though he did score some shots, Nguyen always answered to finish the exchange. In the second round, Collins took a punch and went down for an eight count. He managed to get back to his feet and tried to shake off the cobwebs. Nguyen pushed him against the ropes and landed a punch. It wobbled Collins. John then followed up with another punch that dropped Collins for the TKO. Nguyen looked much improved in this match. The result was a win by 2nd Round TKO for John Nguyen. 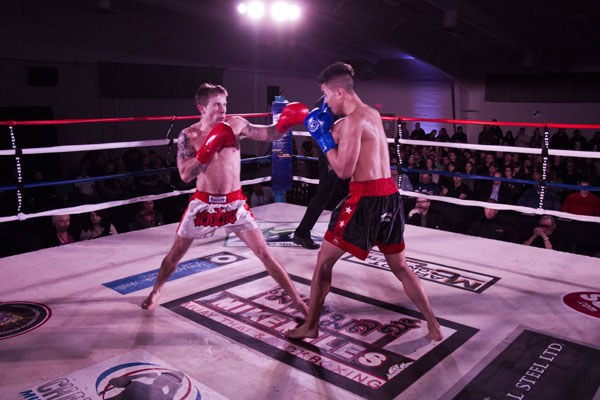 The bout opened with both athletes trading some hard leather. The two were exchanging, when Nelson spun and caught Mann with an unpadded back elbow (which was meant to be a spinning back fist) and dropped Mann onto the seat of his pants. The referee was in the wrong position to see the blow and administed Mann a standing eight count, giving Nelson a 10-8 round. As soon as Mann stood up, Nelson apologized to Mann for the blow. The two traded leather and kicks throughout the bout. At the end, Nelson was given a split decision to win the bout. However a protest was filed, due to the illegal technique that affected the outcome of the bout. The jury overturned the decision, and the bout has been recorded as a No Contest.

It was very exciting opening match, with White aggressively taking the first round. As the bout continued the second round, it was very close. In the final round, the tide turned for Javier Ortega, who won by Split Decision in a great opening bout.