There are only two more weeks until the world’s best Lightweight strikers in champ Joe Schilling and challenger Wayne Barrett take over the Theater at Madison Square Garden for GLORY 12. They’re ready, are you? 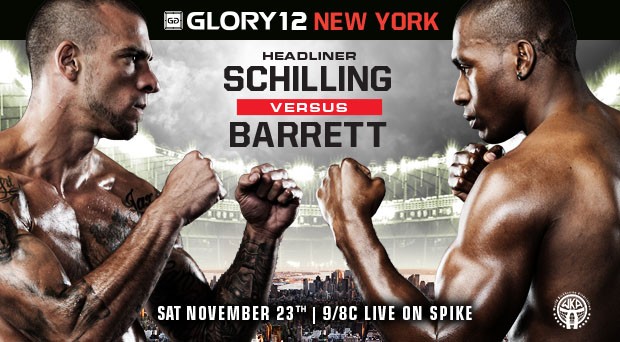 Follow us on Twitter and compete in our #WinGLORY competition for your chance win a FAB (Fighter Arrival Bag) fan-pack, filled to the brim with exclusive GLORY gear. Watch the Joe Schilling pre-fight interview:

In other news, Arthur Kyshenko has signed a multi-fight deal with the GLORY World Series.

The ferocious Ukrainian has a string of knockout victories to his name and is a firm fan favorite. His relentless attacking style has resulted in a knockout ratio of 51%.

“GLORY is the world’s best organization now. I consider myself to be the best fighter in my weight class and so it was natural that I come here to be among the best fighters in the world,” he says.

But he has decided to move up in weight to join the GLORY welterweight division and is sure to make an immediate impact.

“Lightweight is boring for me now. I want something new – new competitors, new challenges,” he says.

“One big difference at [77kgs/170lbs] is that I can eat more and I can be a lot bigger. This has an effect on power and force. My first fight in this weight class will be a surprise for the public and fans I think,” he says.

Kyshenko started his career with the Captain Odessa gym in his native Ukraine but made the switch to Mike’s Gym in Amsterdam three years ago.

“Training and sparring at Mike’s Gym in Amsterdam I’m surrounded by many stars,” he says.

“Any day of the week I can train with Gokhan Saki, Badr Hari, Melvin Manhoef, Murthel Groenhart and now Alistair Overeem also joined us. I have many people to rely on to be inspired by.”

“Nieky Holzken is now ranked at #1 in the GLORY welterweight category, I have a win over him from our time at lightweight,” Kyshenko smiles.

“So I think he and the other guys at 77kg won’t be happy that I am coming over because for sure I am going to be #1. That’s the thing I am coming for.”

A debut date and opponent will be announced in the near future.

“Watch out for me in GLORY,” Kyshenko tells fans. “I will show a high level and put on some great fights. You will never be bored when Artur Kyshenko is in the ring.”