Today the New Jersey State Athletic Control Board conducted a comprehensive and “hands-on” Muay Thai officiating seminar held at Coban’s Muay Thai Camp in New York City. The seminar lasted four hours. This seminar had a focus on the role of the referee. The previous NJSACB Muay Thai seminar was held at North Jersey Muay Thai in Lodi, New Jersey in December 2012. That seminar, which focused on scoring, lasted six hours and was led by England’s Dr. Tony Myers. 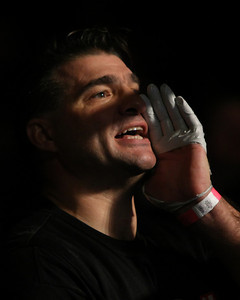 That was preceded by a seminar in July led by Vladimir Borodine of the famed Borodin’s Gym in Brooklyn, NY and held at Strategic Combat in Sayreville, New Jersey. This seminar focused on proper muay Thai technique, balance and striking maneuvers.

The October 19 seminar was led by Coban who is a NJSACB licensed Muay Thai referee. Coban Lookchaomaesaitong” was born Banlu Ansiwet in Thailand His first fight was when he was 11 years old. It was at a fair sponsored by a Buddhist temple. One year later, a physician named Sam Rhung Jong Gon, whose brother was a Muay Thai fighter, and himself a ringside physician, had relocated to Buriram. He invited Coban to train and provided him with a heavy bag. By the time he was 15 years old, he had fought at least 35 fights.

The toughest fights of his career were against Ramon Dekkers. He fought him a total of four times,the Coban vs. Dekkers fights have been rated as the best by any standards, by Muay Thai fans worldwide.