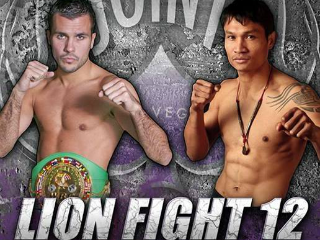 MALAIPET SASIPRAPA vs. FABIO PINCA
FOR THE FIRST EVER LION FIGHT WELTERWEIGHT TITLE

LION FIGHT 12 will take place at the world famous Joint inside the Hard Rock Hotel & Casino on Friday, November 1, 2013. Tickets for this full rules Muay Thai event will go on sale Wednesday, October 2 starting at 12:00 pm PT. Tickets will be available for purchase through the Hard Rock Hotel & Casino box office, at all Ticketmaster outlets (800-745-3000) and online at Ticketmaster.com.
Malaipet is the WBC welterweight international Muay Thai champion and former Rajadamnern Stadium champion and Lumpinee Stadium champion. He is currently riding a five-fight win streak and has 144 wins with 53 KOs on his record. In a “fight of the night” performance at LION FIGHT 11, he won over the sold-out crowd at the Fremont Street Experience with his crushing first round TKO over Caio Uruguai. Malaipet now steps up as the main event on November 1st to compete for the first ever LION FIGHT men’s welterweight title.
“It’s a huge honor to fight for the first ever welterweight title at LION FIGHT 12,” said Malaipet. “I’m going to be fighting Fabio Pinca and this is a big big challenge for me. But I am going to knock him out. And win the belt…check it out November 1st!”
A native of Lyon, France, Fabio Pinca has 89 wins and 33 KOs and currently reigns as the WBC Muay Thai world champion. He also holds rank as the 2012 WBC World Muay Thai Welterweight Champion, 2010 Isuzu Thai Fight Tournament Champion and 2009 WBC World Muay Thai Super Lightweight Champion. Pinca is 29 years old and has been fighting in Muay Thai since the age of 15. He’s known for his technical fighting style and recently for his high profile victory over one of the world’s best Thai fighters, Saenchai, in a spectacular 2012 rematch.
“I am really happy to come to Vegas, the fight capital of the world, and compete for the title at LION FIGHT 12,” said Pinca. “I will put on a good fight and do my best to show the level of the French Muay Thai fighter to fans in America!”

Fighting out of Team Kan Kra in Bordeaux, France, Foroni is 33-years old with a record of 12 wins and one loss. She is the 2012 French Muay Thai Champion and is known for being an aggressive, fast-paced fighter with vicious leg kicks. On November 1st, Foroni is heading to Las Vegas to face the “TimeBomb” Tiffany Van Soest in attempt to snap her opponent’s seven-fight win streak in front of millions on live American television.
More fights for LION FIGHT 12 will be announced soon. For additional information on Lion Fight, please visit LionFight.com, Facebook.com/LionFightMuayThai and follow on Twitter @LionFight.