The Principles Of Unarmed Combat by Marc Jacobs Review 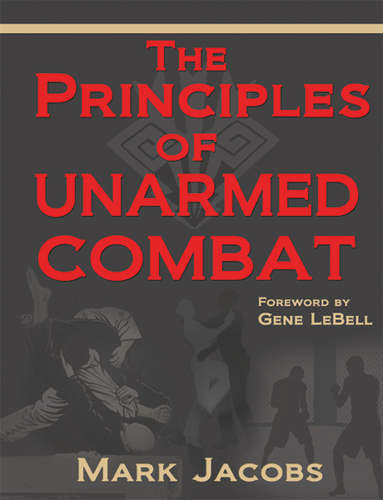 Starting martial arts as a youngster, I heard a lot of conflicting advice from different instructors about how to do everything from throw a punch to perform an armlock. Often, I wished I had some definitive source, like a school text book, that could tell me what really was the right way to do techniques and just why they should be done that way. With The Principles of Unarmed Combat, it looks as though author Mark Jacobs has finally written the text book I always wanted on how to fight.
A columnist for Black Belt Magazine, Jacobs consulted many different sources, from famous martial arts instructors to scientists and medical doctors, in compiling a huge amount of factual information on all aspects of fighting. But he arranges it well across 10 sections consisting of 51 chapters dealing with everything from footwork to striking to defense to grappling. The book isn’t so much a “how to” book as it is a careful examination of the underlying principles that make martial arts work and how you can apply these principles in improving your own skills. While most books of this type usually consist solely of the author’s own opinions, Jacobs seems to have gone out of his way to consult a wide variety of sources including published scientific studies on various aspects of the martial arts. To me, this sets The Principles of Unarmed Combat apart from most other books in the field by actually being based on facts rather than opinion. And Jacobs is honest enough to tell you when there just aren’t enough facts to form a definitive conclusion about something. In most cases, he’ll tell you there is not one simple answer to what is “best” but that the techniques you choose and how you do those techniques are based on a number of factors. He clearly lays out how to identify those factors and how you can adjust to them. He also shows how these principles can be applied across the board to striking and grappling for both competition and self-defense.
Though the book isn’t really about teaching people how to do specific techniques, it does include a number of different examples of various striking and grappling techniques illustrated with drawings. I wouldn’t have minded seeing even more examples of this type but at 350 pages in an oversized format, the book is already pretty big and probably anything longer would have frightened off some readers.
Nevertheless, despite it’s size, it’s well organized and fairly easy to comprehend for someone willing to put in the time and effort to absorb all the information presented within. Kickboxing and muay thai enthusiasts may find the chapters on the methods of attack and the chapters dealing with defense of particular interest. With the methods of attack he defines in nine broad categories all the ways a striking attack can be set up and in the section on defense, he categorizes all the different ways a striking attack can be defended against. Then he tells you which of the methods of attack will work well to defeat each specific defense.
Overall, it’s hard to make a comparison between the Principles of Unarmed Combat and any other book on the martial arts because there’s simply nothing else like it I’ve come across. In its comprehensiveness and depth of factual information, it may prove the definitive guide to fighting. It even includes a foreword by the legendary martial artist Gene LeBell, so you can’t get a better recommendation than that. I just wish I would have found this book years ago and it would have saved me a lot of time in my own training.