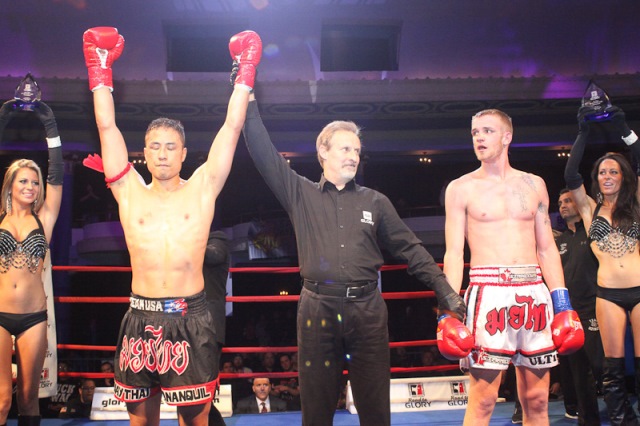 Mananquil’s performance in the tournament earned him a $20,000 grand prize and a multi-fight contract with GLORY, the world’s premier kickboxing league that launched the developmental Road To GLORY tournament series in February in order to identify potential future kickboxing champions and superstars.

“I have so much respect for all of the fighters who came to fight in tonight’s tournament,” said the 31-year-old Mananquil, a student of Muay Thai since the age of 15 and a protégé of Kru (trainer) Sam Phimsoutham. “I am excited about my future and having the opportunity to compete amongst the best fighters in the world in GLORY.”

In the quarterfinal stage of the tournament, Mananquil found himself in a tough fight against Jameel “The Real Deal” Massouh (28-10, 8 KOs) of Milwaukee. Massouh, a mixed martial artist as well as a kickboxer, took the fight to Mananquil, but Mananquil intelligently utilized his superior kicks and punches to edge out a split decision and advance to the semifinal stage of the tournament where he met battle-tested Muhsin Corbbrey (34-11-2) of Tulsa, Okla.

Corbbrey, who dominated Dustin Johnson (17-6, 10 KOs) of Baton Rouge, La. in the quarterfinal stage of the tournament, scoring a knockdown on Johnson in the second round before claiming victory by way of unanimous decision, was more cautious and somewhat tentative in the ring against Mananquil for the majority of their bout.

In the third round, though, Corbbrey and Mananquil turned up the tempo and began slugging it out. Corbbrey opened up his guard, allowing Mananquil to connect with a solid left hook and high right round kick that put Corbbrey down for the 10 count, sending Mananquil to the championship round of the tournament where he faced off with Troy Sheridan (21-3, 9 KOs) of Stouffville, Ontario, Canada.

Sheridan reached the championship stage of the event by earning unanimous decisions over Cyrus “Black Dynamite” Washington (53-22, 48 KOs) of Saginaw, Mich. and Jose Palacios (43-11, 13 KOs) of Fremont, Calif. in the quarterfinal and semifinal stages, respectively.

Despite having fought six full rounds to reach the championship bout, Sheridan showed little fatigue against Mananquil and the two engaged in an all-out war, trading punch combinations and kicks from the outset. It was Mananquil’s superior offense and aggression, though, that gave him the edge and convinced all three judges scoring the fight to award him the decision.

GLORY action resumes on Saturday, June 22 with the league’s first-ever championship series event in the U.S. GLORY 9 New York takes place at Hammerstein Ballroom in New York City and will be headlined by a one-night, eight-man single-elimination light heavyweight (209 pounds/95 kilograms) tournament loaded with a collection of the sport’s superstars including Tyrone “King of the Ring” Spong (69-6-1 43 KOs) of Boca Raton, Fla. via Suriname; Steve McKinnon (42-5, 29 KOs) of Australia; Danyo Ilunga (51-4, 41 KOs) of Germany; and Filip Verlinden (40-9-1, 16 KOs) of Belgium.