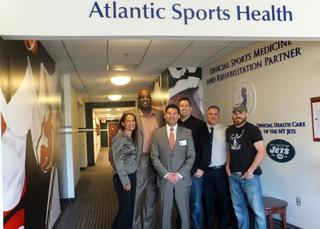 Opening remarks were made by Aaron Davis, commissioner of the New Jersey State Athletic Control Board and first vice president of the Association of Boxing Commissions.

The event also featured a presentation by Ultimate Fighting Championship Lightweight Fighter, and Sparta, NJ native, Jim Miller, and Mike Contstantino, coach and manager of UFC competitors. Miller and Constantino shared stories of both positive and negative cage-side interactions with ringside physicians and offered suggestions for improving the rapport between fight staff and medical staff, emphasizing that confidence and communication is key.

Deputy Attorney General for New Jersey Nicholas Lembo, whose numerous contributions to combat sports in New Jersey include formal drafting of the unified rules of mixed martial arts and advocating for uniform health and safety policy for all combat sports participants, spoke about the legal aspects of ringside medicine.

The day concluded with an audience participation activity entitled, “Ringside Acuity: Fight Clips with Discussion.” Wulkan presented video clips of fights to the audience and put them in the role of a ringside physician, asking them how they would treat the injured fighter.