PLUS JEROME LE BANNER TO FACE KOICHI IN

Additionally, a heavyweight Superfight rematch between powerhouse and all-time great Jerome Le Banner (73-21-2, 59 KOs) of France and Muay Thai champion Koichi (26-8-1, 15 KOs) of Japan was announced for the GLORY 8 Tokyo event. The second meeting between the pair follows their action-packed first encounter in Tokyo on New Year’s Eve when Le Banner stopped Koichi with a blistering right hook with just 13 seconds remaining in the third and final scheduled round of the matchup.

The 40-year-old Le Banner, who has faced and defeated nearly every major rival of his generation, including legends Ernesto Hoost and Peter Aerts, stalked and punished Koichi with punch combinations and body kicks during their initial meeting, but Koichi’s iron chin helped him stay on his feet, retaliate and dish out leg kicks that badly damaged the lead thigh of Le Banner and slowed the Frenchman down before Le Banner connected with the finishing blow. 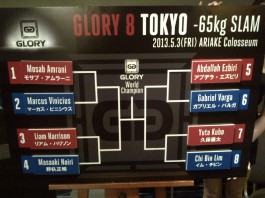 Here is what several of the tournament fighters had to say:

“I’m really excited to be competing for the best kickboxing organization in the world. For the past couple years, I’ve been competing against good ‘A’ class fighters, but fighting for GLORY
is the opportunity I’ve dreamed of.

“I believe the featherweight division will be a great weight class for very exciting and competitive fights. I’m truly looking forward to competing in Japan and being part of the best tournament I’ve ever seen at this weight class. I’m coming ready to fight and will be in amazing condition.”

“I’m very happy and honored to become a GLORY fighter. This is the top of (Mount) Everest – the best event in the world!

“I’ve been French, European and, now world champion and I had the pleasure of fighting in Japan already and to fight a great tournament, step by step. Now I have (the opportunity) to fight for GLORY, the biggest promotion, and in the greatest tournament ever at 65 kilograms!

“This tournament is the toughest ever at my weight. Amrani, Kubo, Harrison, Noiri… all are top notch. The GLORY Slam tournament will crown the best featherweight fighter in the world!”

“It’s great that GLORY puts together a huge tournament in this weight category and that I get a chance to fight in it. In this tournament only the best fighters in the world get the chance to fight, and I am looking forward to proving to everybody that I belong there. All I can say is that I will train hard and will give it all I’ve got to bring the title home.”

“I am very excited about being in this tournament. I am considering it the opportunity of my life and the crucial step to becoming No. 1 in the world. I am getting prepared to achieve this.

“I am ready to surprise the audience and, with the will to win, everything is possible. I want to show the poor people of my region (Bahia) that everybody can be a champion, just like me.”

“I am really proud to be a part of the featherweight tournament in GLORY. Based on that pride, I will fight as well as possible and put on a good performance.

“For me, this tournament isn’t about money or prestige. I’ve only got one goal and that’s to get the rematch with Mosab (Amrani) and get revenge. (Amrani defeated Harrison via KO in the first round of their matchup at GLORY 5 London on March 23.) want to redeem that embarrassment that I suffered at GLORY 5 in London by finishing Mosab and showing everyone that what happened in London was an accident. Everything else is secondary. Of course I want to win the tournament but all I can think about every night is rematching Mosab and laying these demons to rest. If we meet again, Mosab goes down.”