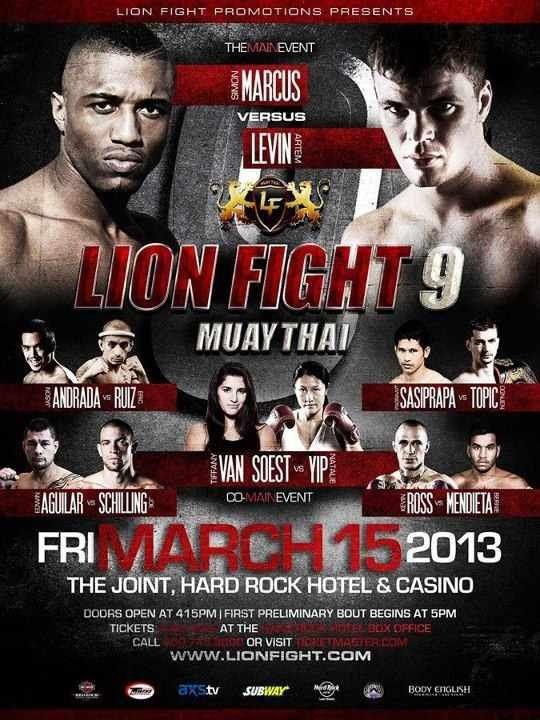 ALL THE STARS OF FIGHTING AGREE,
“MUAY THAI HAS ARRIVED!”

LAS VEGAS, NV – The Las Vegas-based Lion Fight Promotions made fighting history when it presented the first ever nationally televised full Muay Thai rules event with AXS TV last month. Scott Kent, CEO of Lion Fight Promotions, received rave reviews from the fight world, and was paid the highest compliment of all when some of the biggest stars in fighting showed up to take in the action. Oscar De La Hoya, Urijah Faber, Anthony Njokuani, Keith Jardine, Gilbert Melendez, Cheick Kongo, Ray Sefo and Dewey Cooper were among those in the packed house of Lion Fight 8 when Yodsanklai Fairtex KO’d Gregory Choplin in the night’s sizzling main event. Now, Muay Thai returns to the Joint at the Hard Rock Hotel & Casino in Las Vegas, and live on AXS TV for “LION FIGHT 9” Friday, March 15 starting at 10:00 p.m. ET/7:00 p.m. PT.

“It was phenomenal to have so much support from the fighting community and to see Lion Fight go live in homes all across America,” said Kent. “I am so thankful to Mark Cuban and Andrew Simon for believing in the potential of Muay Thai in this country, and am excited to be back on AXS TV for LION FIGHT 9. With every fight, we win over more and more fans because every card is stacked with the best Muay Thai fighters in the world who deliver the fast-paced action of kicks, punches, strikes, knees, elbows and knockouts!”

In addition to boxing legend Oscar De La Hoya who took in the action from a box suite high above the ring, many stars of MMA sat ringside and even worked corners at LION FIGHT. Urijah Faber, former champion and current UFC fighter, was thrilled with the night’s action. “Lion Fight’s event was awesome, it is pretty incredible to see the true masters of Muay Thai compete live and in person,” said Faber. “Yodsanklai Fairtex was amazing – so technical – he got me pumped up to do battle!”

Anthony Njokuani, UFC lightweight, showed up to support his teammate Fanny Tommasino who won on the undercard. “It was a great show with a lot of action packed fights, the best card I’ve ever seen,” said Njokuani. “Yodsanklai’s performance was amazing and was a pleasure to watch him fight in person.”

Also attending from the UFC family was Gilbert Melendez, Cheick Kongo and UFC light heavyweight turned middleweight “The Dean of Mean” Keith Jardine who was blown away by the full Muay Thai rules fights. “I was totally impressed with the show, the production was fantastic, the crowd was pumped and the Muay Thai fights were a blast. I had so much fun, I definitely will be back for another one.”

Fans won’t have to wait long, as AXS TV announced last night on Inside MMA, Kent has already put together another mega-fight for LION FIGHT 9. As the main event, he has staged the one fight that no else could make happen: the battle between the two best light heavyweight Muay Thai fighters in the world. Friday, March 15, live on AXS TV, in a Champion vs. Champion dream matchup, Simon Marcus and Artem Levin will finally square off. Only one will walk away with the newly minted LION FIGHT light heavyweight championship belt.

“I am thrilled that LION FIGHT is the promotion that was able to put together this long-awaited superfight between Simon Marcus and Artem Levin,” said Kent. “This is a world class fight, Muay Thai at its best and Levin vs. Marcus is taking place right here in Las Vegas, the fight capitol of the world, for the LION FIGHT light heavyweight championship belt.”

No one in the Muay Thai universe will argue that Marcus and Levin are the two best in their weight classes. Fighting out of the highly respected Siam #1 School in Toronto, Ontario, the yet to be beaten Marcus started training in Muay Thai at just sixteen years old. Now 26, the 6’1” Canadian-Jamaican has been fighting pro since 2006, racking up an impressive 22-KO record. Considered by many as the very best in the world, he has yet to defeat Levin, which will stamp his number one ranking in the sport and crown him as Lion Fight’s new world light heavyweight champion.

Standing 6’3” and fighting out of Prokopyevsk, Russia (65-3), Levin is a multiple world light heavyweight Muay Thai champion with 31 KOs on record. He’s been fighting on the pro circuit since 2003, acquiring virtually every European title in the sport across three weight classes including the WBC Muay Thai World Light Heavyweight title, the ITS SHOWTIME MAX World Champion, the WMC Intercontinental Championship (76 kg.) and also becoming the qualifying tournament champion on the Russian version of The Contender. Now, in this long-awaited superfight at LION FIGHT 9, Levin is ready to not only add the Lion Fight title to his collection, but also destroy the legend of the Muay Thai fighter known as Simon Marcus.

As the night’s co-main event, Tiffany “Time Bomb” Van Soest (5-0-1) takes on Canada’s Natalie Yip, a North American Amateur Muay Thai Champion also fighting out of Siam #1 School in Toronto, Ontario. After amassing 23 fights as an amateur, Yip is making her pro debut in LION FIGHT 9. Van Soest, undefeated female bantamweight champion who trains out of the famed Blackhouse gym, returns to the Lion Fight ring to attempt another solid victory in the organization.

Tickets for LION FIGHT 9 go on sale today, Saturday, February 9 at 12 Noon PT. Tickets are available for purchase through the Hard Rock Hotel & Casino box office, at all Ticketmaster outlets (800-745-3000) and online at Ticketmaster.com.

More fights for LION FIGHT 9 will be announced in the near future. Please visit LionFightPromotions.com and follow @LFPLasVegas for news and fight updates.