By Dr. Michael Kelly, D.O. as told to Fightland staff 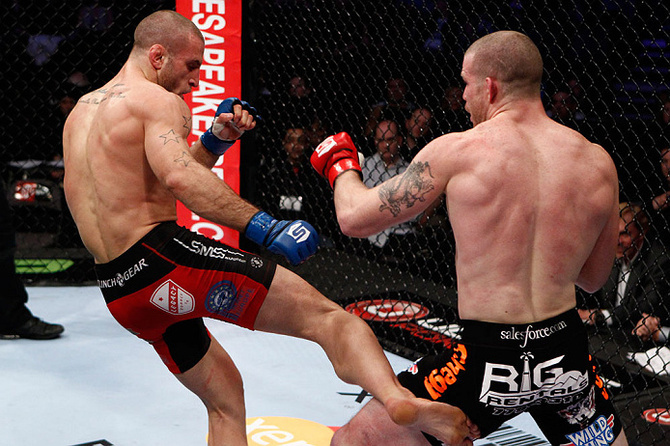 During the last-ever Strikeforce event, defending welterweight champion Nate Marquardt lost his belt after getting repeatedly kicked in the leg by kickboxer Tarec Saffiedine for 25 minutes straight. The resulting bruise (which Marquardt was kind enough to Tweet pictures of) was a doozy, which, by the way, is as close to a medical diagnosis as we here at Fightland are capable of making. Thankfully there are doctors in the world, both to take care of people like Nate Marquardt and to explain to people like us exactly what Marquardt’s problem is. So we called Dr. Michael Kelly, a sports-medicine specialist practicing in Livingston, New Jersey, and asked him to explain what is happening to Marquardt’s leg and what might happen if it doesn’t get treated properly. It turns out we called the right guy. In addition to his private practice, Dr. Kelly works as a ringside physician for MMA fights throughout New Jersey, from regional shows to UFC events. He’s also an eighth-degree black belt in Okinawan Shorin Ryu karate and the author of the book Fight Medicine.]

Dr. Michael Kelly: There’s definitely the risk of long-term damage here. The biggest problem with something like this, where you have a repetitive injury in the same area and it’s that extensive, is the development of Myositis Ossificans Traumatica. What that is, is you get heterotropic bone formation in the muscle as a result of repetitive strikes or repetitive blood trauma to the same area. As your body heals, it starts to reabsorb some of that blood, but it leaves deposits of calcium in the muscle, and the body actually starts to form bone in the muscle, which affects the function of the muscle. And looking at this bruise, you can see varied levels of Ecchymosis, of bruising. That tells me he’s more likely to develop big calcium rocks in the muscle.

Myositis Ossificans can cause quite a bit of trouble and take a year to resolve. And sometimes it doesn’t resolve at all and you need surgery. The worst-case scenario is, if it’s severe you can lose function of the muscle. The muscle has to contract and when a muscle contracts, at the microscopic level you have all these little fibers that are sliding past each other, and if you have a big piece of bone in the middle, they can’t contract. So you risk loss of strength, long-term deformity, and significant dysfunction. Generally when we see this we want to treat it immediately with something called Indometacin, a non-steroidal anti-inflammatory medicine. There are studies that show it inhibits the formation of that heterotropic bone in the muscle. 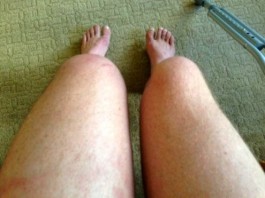 In this picture, you can see a difference in size between his injured leg and his opposite leg. That’s significant because obviously the muscle is bleeding inside, and the thigh can hold up to two liters of blood. That means there’s a significant volume of blood loss that’s accumulating in the thigh. And blood loss can lead to anemia and other significant problems.

Severe muscle breakdown is another interesting complication. We call it Rhabdomyolysis, when the muscle tissue gets broken down from trauma or prolonged Ischemia, which is the restriction of blood flow to tissue, causing the body to release Myoglobin into the blood stream. And high levels of that can result in kidney failure because it clogs up the kidneys’ filtering system. But that’s not too common. 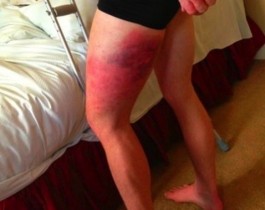 Hmm, this is a nice contusion. There are multiple levels of Ecchymosis so he’s going to have some problems for a while.