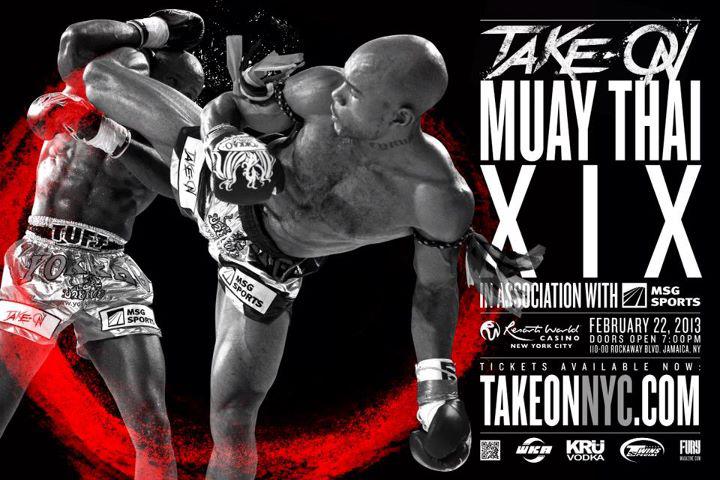 As the first Take On Muay Thai event of 2013 draws near, we wanted to be the first to provide you with the official press release on behalf of Take On Productions and Resorts World Casino New York City.

Tickets start at $45.00 and go on sale Friday, January 18, at www.TakeOnProductions.com, and at Muay Thai and MMA gyms throughout NY, NJ, CT and PA. Full event information along with fight card, event details, fighter information, and other exciting content can also be found at www.TakeOnNYC.com.

After closing out 2012 at the legendary Madison Square Garden with “Muay Thai at the Mecca 2”, the 2013 season is building up to bring more high octane events and new and exciting venues. “Leading off the 2013 season at the first ever casino in New York City is just a taste of what is in store for the year ahead” said Eddie Cuello, Take On President.

“We are excited to add this new and exciting venue to our roster after successful events at venues including Madison Square Garden and Bally’s Atlantic City in 2012. Consistently forging ahead for our fighters, our fans, and for the sport of Muay Thai has been our main goal. We are proud to be able to deliver top notch fights at top notch venues” stated TaKe On CEO Mike Gasparski.

Several of the marquee names featured on “Take On Muay Thai XIX,” which will include representatives from 22 premiere Muay Thai kickboxing gyms, are:

Jess Ng (8-1) – coming off an impressive victory in Thailand and has gone 7-0 in her last 7 fights to include a WKA and TBA title!

Joe “Avatar” Bastone (3-0) – Bursting onto the fight scene in impressive fashion, Bastone has two of the most vicious knockouts in Take On history

Others top fighters appearing on the fight card include: