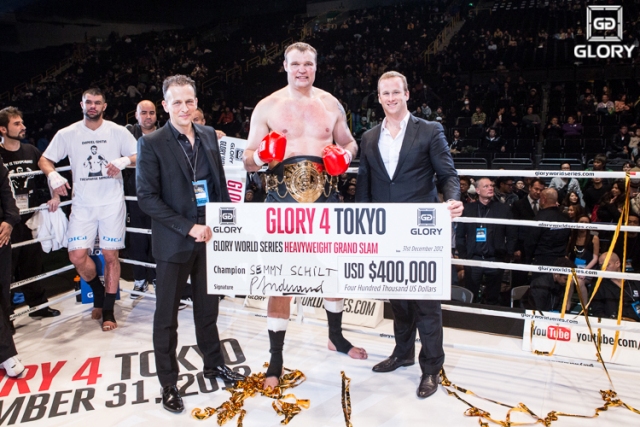 ON CBS SPORTS NETWORK IN THE U.S.

TOKYO, Japan (Dec. 31, 2012) – After four fights in one night, two of which he ended by KO, Karate black belt Semmy Schilt (43-6, 20 KOs) of the Netherlands, emerged as the winner of the highly-anticipated GLORY 4 Tokyo – Heavyweight Grand Slam. Schilt, a fan favorite of this star-studded, 16-man, one-night kickboxing tournament, claimed the $400,000 grand prize and! secured his position as the world’s No. 1 heavyweight kickboxer.

“I’ve won many tournaments, but this is the best ever,” the towering (6-foot-11/2.12 meters)Schilt said afterwards. “It was a hard tournament with some very good fighters and some very hard fights for me and for everyone else. But, all the struggle is worth it to win a competition like this. GLORY is home to the best fighters in the worl! d and I am very proud to be the winner of (the league’s) first-ever Grand Slam tournament.

“This was not just a great New Year’s Eve event, it was a great martial arts event,” said GLORY Chairman Pierre Andurand. “I think that the skill and the courage that we saw in the ring tonight is really what the martial arts are all about. Perhaps it’s a bit of cliché seeing as we are in Tokyo, but I really do think we can say that the fighters tonight embodied the samurai spirit which all martial artists aspire to.”

The tournament’s ‘Best of Three’ rule, designed to eliminate needless injuries, mandated that any fighter who won the first two rounds of a bout would advance to the next stage without having to fight the third and final scheduled round of the bout.

Schilt’s run saw him stop Brice Guidon (28-8, 4 KOs) of France in the first round of the tournament’s first fight! via a pair of heavy right hands. He then outclassed hot prospect Rico Verhoeven (37-7-1, 8 KOs) of the Netherlands to take a decision win under the ‘Best of Three’ rule before meeting Gokhan Saki (79-16, 55 KOs) of the Netherlands in the semifinal stage of the tournament.

Saki, who had KO’d his opponents in the first round of both his Final 16 and quarterfinal stage matches, respectively, tried to do the same to Schilt but couldn’t overcome Schilt’s significant reach advantage.

Saki landed some good shots, but couldn’t get the clean connection he needed in order to seal the deal. The judges declared Schilt the winner under the Best of Three rule and, although Saki bitterly disputed the decision, Schilt advanced to the championship round of the tournament.

In the championship matchup, Schilt met Ghita, who had finished his semifinal fight in j! ust 10 seconds by stopping the giant Ben Saddik with a left kick to the solar plexus. As a result, Ghita was well-rested and less hurt that Schilt, who had persevered through a war with Saki. But near the end of a close first round, Schilt threw a perfectly-timed head kick and connected his shin cleanly across the side of Ghita’s head.

Ghita went down and struggled to beat the referee’s 10-count. He made it to his feet just in time, but the referee determined that he was unsteady on his feet and that the fight should be stopped for Ghita’s own safety, thereby sending Schilt to the winner’s circle.

Nagashima had no answer for Van Roosmalen’s forward pressure and awesome power. He showed a lot of heart in refusing to stay down after being knocked down several times and in some instances literally knocked off his feet with low kicks. Nagashima went the distance, but Van Roosmalen walked away the winner by unanimous decision.

Toshio Matsumoto (38-10-6, 30 KOs) gave Jason ‘Tyson’ Wilnis (19-1-2) a stiff test in their middleweight (185 pounds/84 kilograms) match. The experienced Matsumoto is known as ‘The Knockout Artist’ and he did his moniker proud, demonstrating slick boxing skills and fluid combinations. The younger and more powerful Wilnis took a while to get into the fight but, once he did, his superior conditioning put him in front— and by the final bell he was dominating on his way to a unanimous decision win.

Flyweights Sang Jae Kim of Korea and Mutsuki Ebata (17-1-1) of Japan stole the show with a three-round battle that was non-stop from start to finish. The Japanese fighter was by far the better man but his Korean opponent could not be stopped and refused to lie down. Kim lost a one-sided decision but impressed onlookers with his heart and got a big round of applause from the Japanese arena.

CBS Sports Network is available across the country through local cable, video and telco providers and via satellite on DirecTV Channel 613 and Dish Network Channel 158. For more information, and to access the CBS Sports Network channel finder, go to www.cbssportsnetwork.com.

For more information, go to www.gloryworldseries.com.

GLORY World Series (www.gloryworldseries.com) is the world’s new premier kickboxing league, producing live events across the globe and offering up to $1,000,000 in prize money to the winners of one-night, 16-man ‘Grand Slam’ tournaments, which are open to only the best fighters in each weight class. The fight series also includes 8-man ‘Slam’ tournaments and events with traditional, single bouts.

With television deals spanning every continent, online live video streaming of all shows and the world’s largest online martial arts library, GLORY is one of the world’s most widely distributed sporting organizations.

Owned and operated by Glory Sports International (GSI), the organization has offices in the UK, Holland, Tokyo, Malaysia, Singapore and soon in the USA. Its personnel include an unprecedented mix of accomplished entrepreneurs and senior level executives from the diverse worlds of ! finance, sports marketing, television and martial arts fighting.