US team grabs the Gold! 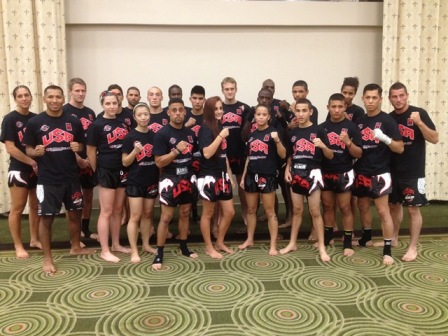 The 2012 WKA National Team, sponsored by Fighters-Inc. and L-1 Boxing Gear, met in Orlando, Florida at the beautiful Double Tree Resort to take on the world at the nineteenth WKA World Championships. The US team, who went through the North American Championships to qualify, was prepared to take on the world’s best. The team, consisting of competitors from all over the US, prepared to battle in the disciplines of: Thai Boxing, MMA, K-1, Full Contact and Grappling.

Allison Casella kicked off the US Ring Sports with a fast-paced start in the Juniors’ K-1 Division. Though her opponent won by decision, this fighter showed heart and determination by setting the tone for fights to come. Nextup was Kit Fung in the women’s K-1 division. Kit fought a very technical and hard bout, but ended up on the short side of a split decision. Kit made crucial adjustments toward the end of the fight, making it a tough decision for the judges. Ani Hilditch took the unanimous decision in a power-packed, fast-paced match, taking the first blood for the US Team. Ani was able to consistently change angles and score with a variety of techniques which kept her opponent off guard. Team USA continued their onslaught with Yulia Guseva, Laurie Hyacinthe, Christina Peteraf, and Jenn Szeker’s domination of experienced, technical foreign opponents in their elimination bouts. Of noteworthy interest, was Peteraf’s beautiful knee to the body for a TKO victory, showing the poise of a fighter with twice her actual experience. Hyacinthe, too, gained her victory over an opponent with far more international experience using her range and footwork to cut the angle and outclass her opponent. Next up, two US Team members faced off against each other in a Junior K-1 match, which was a back and forth battle that ended with Greg Pritchett taking the win over Walfren Villeda by doctor’s decision. Nick Perez came out powerful and technical despite a few flashy moves by his opponent. Alex Melts fought a close fight in the Adult K-1 division, taking a rocking punch but weathering the storm to prove the toughness and heart of Team USA. Axel Mendez ended his match impressively in the first round with a hard knee to the body. Brima “Abe” Kamara also won his match with his athleticism and ring generalship. Omar Fowler closed out the first day of K-1 competition, winning with his superior boxing skills. All in all, the US Team had a great first day and eagerly looks forward to the finals and other divisions, such as Full Contact, Thai Boxing, and MMA.

Day 2 started off with the same steam as day one for Team USA with Full Contact Kickboxing action. The action began with Yulia Guseva, who continued her aggressive onslaught in her second fight of the tournament. By maintaining her incredible reach and scoring a knockdown in the second round, she easily secured a unanimous decision win. Next up was Niko Tsigaras, who dominated with a TKO, by scoring 3 knockdowns early on with machine gun punching to the head and body. ClinsoBrumfield had a back and forth bout, winning a closely contested, yet well-earned win by decision. Richard Abraham, who registered for Thai Boxing, stepped up to the plate for Team USA to fight Full Contact Kickboxing for the very first time and did not disappoint. After winning his first fight by decision with crisp boxing and thunderous high kicks, he proceeded to put on a dominant second fight, forcing his opponent to not answer the bell after one round of competition.

On the third day of competition, Yulia Guseva, already having fought her K-1 match, fought Full Contact. Guseva used her reach to score a standing count in the first round and take the victory by unanimous decision. Niko Tsigaras scored a stunning TKO, delivering punishing body shots to his opponent and dropping his opponent three times in the first round, ending the fight. Clinso Brumfield, originally slated to fight only K-1, stepped up to the plate and took on the Full Contact division as well. After three full roundsof back and forth punch-kick combinations, Clinso took the win by split decision. Also stepping up unexpectedly into the Full Contact division was Richard Abraham who fought two fights in one day. His first win came by unanimous decision with a third round standing count, and his second victory came by TKO after his opponent could not answer the bell for the second round. Junior Ahmad Ibrahim tired out his opponent and won via split decision in his first match. Axel Mendez and Lubomyr Muraschik, fighting very tough opponents, lost by decision but went the full three rounds. US Team members Daniel Chacon and Jonathan Vinyard fought a grueling MMA match, with Vinyard using timing to score the takedown and Chacon pulling off a tight arm bar from the guard. All team members who won on the third day of competition moved on to the finals.

In the final K-1 division, Greg Pritchett won via surrender in the second round, defeating his opponent with combination low and high kicks. Teammates Vahe Sahakyan and Stanley Tcherevatenko faced off against each other, leading to a unanimous decision for Sahakyan. Ani Hilditch came out with a strong right hand and clean shots but was defeated by an injury from her first fight and the reach of her opponent by unanimous decision. Yulia Guseva, in the K-1 finals, showed heavy hands but lost her match also to unanimous decision. Teammates Laurie Hyacinthe and Christina Peteraf fought a war with Hyacinthe using her reach to achieve a unanimous decision. Jenn Szeker used a stiff jab and heavy low kicksbut lost to last year’s winner, a very seasoned opponent, by decision. Continuing with K-1, Nick Perez recovered from a hard knee to the head to continue to throw powerful precision shots, losing by a close split decision to a very tough opponent. Niko Tsigaras, using his signature style of body-head hard core boxing, took the win by unanimous decision. Axel Mendez likewise took the unanimous win with strong boxing and elusive footwork. Clinso Brumfield, though he had power and aim, lost to a decision. Brima “Abe” Kimara won his fight by unanimous decision using his aggression and technicality. Omar Fowler traded technique for technique with his opponent, losing to decision.

In the MMA finals, Daniel Chacon again pulled off a hard arm bar from guard against teammate Adashev Zarrukh, whose striking set him apart. Khadzimurat Bestaev lost to arm bar.

For Thai Boxing, team mates Micah Bagby faced off against Carlos Lopez. This all-out war saw heavy hands setting up the kick on Bagby’s side, but having Lopez take the win with his counter-kick style combined with good clinch to high knees. Again, team mates Richard Abraham and Scott Drummond faced each other in another hard and heavy match with Drummond being the technical fighter and Abraham breaking out the power and taking the unanimous decision. Amad Shojaei-Zambrana lost to decision against a fast-paced, high-energy opponent.

In the Full Contact division, Yulia Guseva went the full three rounds with a very seasoned opponent, taking the silver by decision. Niko Tsigaras, with a torn knee, fought his final match and used once again his characteristic boxing style, losing closely to an opponent who counter-boxed and threw numerous head kicks. Alex Melts lost a close split decision but made the necessary adjustments against a very aggressive fighter. Richard Abraham, veteran of numerous divisions, faced team mate Clinso Brumfield. Brumfield threw many hands-to-feet combos but Abraham took the close split decision with his lead kicks and inside hand work. The star of the Full Contact division was junior fighter, Ahmad Ibrahim, who battered his opponent, scoring two knock downs and taking the fight by brilliant HEAD KICK TKO in the second round for the gold.

All in all, Team USA fought with heart and heavy hands, with every member of the team earning a medal and the pride to come home with the knowledge that they had competed internationally against the best of the best.