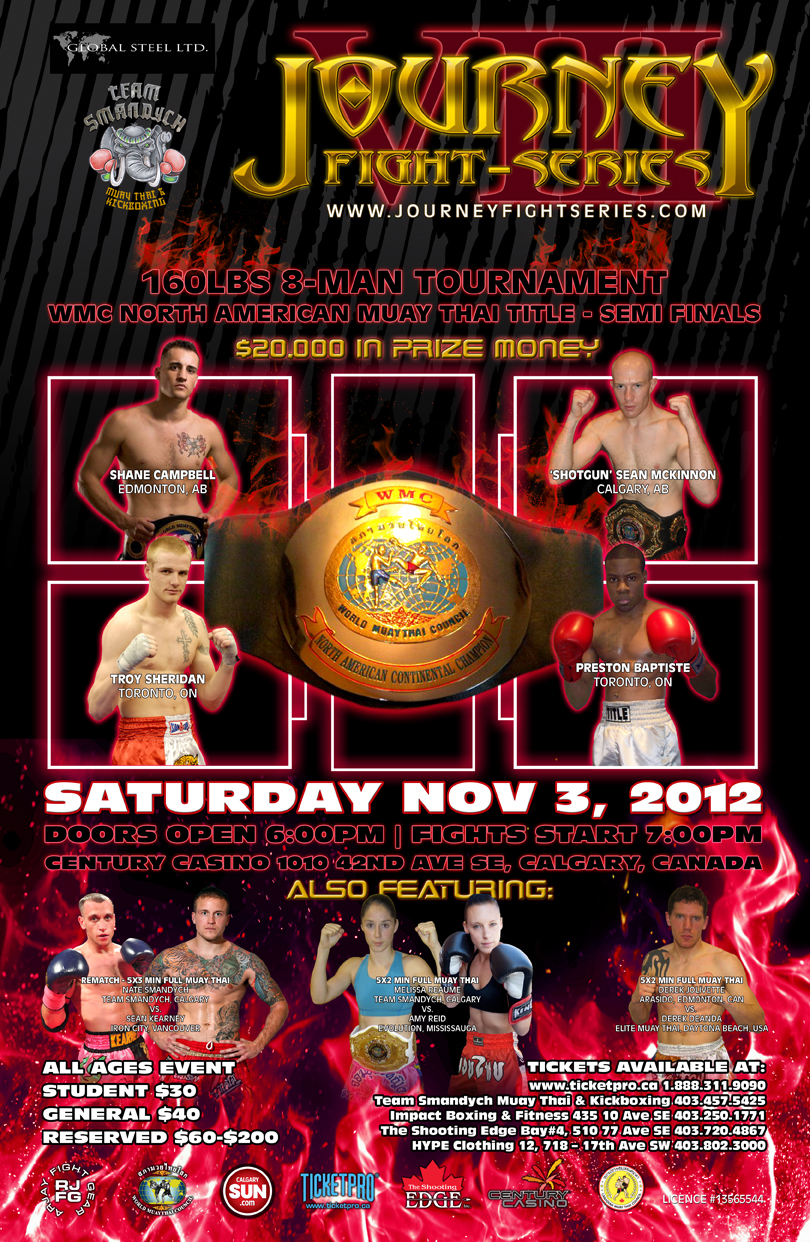 Journey Fight Night is returning November 3rd, 2012 and will be continuing their series of the 160 lbs tournament into the semi-final round. Trevor Smandych, head of Team Smandych Muay Thai is now easily the most prolific and probably best known promoter in Canada. His events are growing and with a pay per view deal with gofightlive.tv you can see for yourself why. In the most biased way possible: it’s good to see Trevor Smandych keeping Muay Thai live and busy in the great north.

Looking at the match ups of Journey Fight Night’s 160lbs semifinals, it could almost pass for a Toronto versus Alberta card featuring the best known fighters from both regions of Canada. Even though the fights are for a tournament it’s good to see the standard Muay Thai fight format of 5 rounds at 3 minutes each being used for all the tournament fights.

The card as of this writing is as follows:

The best known among all the competitors is Shane “Shaolin” Campbell. Starting with Iron Tiger and coach Alin Halmagean in Toronto. Shane Campbell began his fight career at the age of 18 and continued fighting professional Muay Thai uninterrupted until October of 2010 when Campbell tried his hand at MMA with mostly winning results. After winning multiple titles and fighting good international competition including Chris Ngimbi and Panjunsk in the Enfusion kickboxing tournament of 2010, Campbell was busy fighting in the Canadian MMA circuit. His first return to Muay Thai was in the opening round of the Journey Fight Night series where he defeated Nate Chambers by stoppage.

Toronto fighter, Troy Sheridan is coming to the match with a 5-0 record, 3 of those wins coming by knockouts. Sheridan, like most of the Canadian fighters, has a deep history of amateur fights and wins. It will be interesting to see if Sheridan maintain his momentum of wins against the fighter most observers will view as the most formidable competition on the card.

Also from Toronto and coming out of a tournament first round win is Preston Baptiste. Baptiste edged a split decision over Marcus Fisher. Baptiste’s opponent is Calgary’s own Sean McKinnon who made his entry into the 2nd round by stopping last minute replacement Rhys Jones.

Let it never be said Trevor showed favoritism towards family. In the past Nathan Smandych has fought Justin Greskiwiecz. This time around Smandych will be rematched against Kearney albeit by split decision. This is an interesting matchup with a built-in storyline into it.

The amateur undercard details are yet to be released. For more information check out www.journeyfightseries.com with ticket purchasing information.