World No. 1 ranked middleweight Giorgio Petrosyan (71-1-2 (1 NC), 33 KO’s) of Italy, superstar Albert Kraus (66-16-3, 39 KO’s) of Netherlands, KO artist Robin van Roosmalen (35-13-3, 10 KO’s) of Netherlands and Swiss mercenary Shemsi Beqiri (71-7, 31 KO’s) were the top seeds and were allocated numbers 1,3,5 and 7 respectively. Legendary champion Ramon Dekkers took centre-stage to draw the numbers which would determine which of the remaining four fighters would face them.

“These tournaments are the toughest thing in fight sports,” says GLORY Managing Director Marcus Luer. “If you actually think about what these athletes have to do, it is mind-blowing. The winner will have had to face three of the best fighters in the world in the space of a few hours. It is an incredible test of heart, skill and toughness.

“Not only that, but in such a tournament anything is possible. There are favorites of course – Petrosyan is the top seed and Kraus is top-tier – but tournaments throw up all sorts of variables. Tactics are important as well – some fighters play it safe and defensive as they try to avoid damage on the way to the final. Others try and blow through their opponents as quickly as possible to minimise their time in the ring. There will be some truly awe-inspiring performances.”

American standout Ky Hollenbeck (34-7, 21 KO’s) was drawn first and faces Petrosyan in what is the toughest opening match anyone could ask for. Semmy Schilt (World No. 1 ranked heavyweight) student Davit Kiria (18-7, 10 KO’s) of Netherlands was next; the karate stylist is matched with Beqiri in what promises to be a war.

But it could well be eclipsed by the third match, which pits English entrant Tim ‘TNT’ Thomas .(60-1-9, 35 KO’s) against van Roosmalen in what could well be a Fight of the Year contender. The final match saw the tournament’s oldest competitor Kraus, 32, matched with its youngest, 21-year-old Swedish prodigy Sanny Dahlbeck (24-4, 14 KO’s). Thomas may be an unknown going into this tournament, but Kraus certainly knows who he is. Thomas confidently dismissed Kraus as “past it” in a recent interview and says he will “walk through him” if they meet in the tournament.

The quotes were relayed to Kraus – who was standing right next to Thomas. The two will meet in the semi-final if they win their opening-round matches. 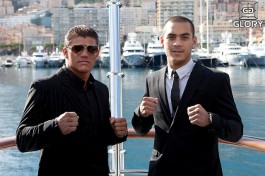 After the conclusion of the draw, which streamed live and for free of charge around the world on GloryWorldSeries.com, the eight tournament fighters commented on their opening round match-ups:

“I don’t feel any pressure and for me, I am preparing exactly as I did for my first ever fight. People can call me number one, the favourite and so on – I don’t think about it. I will be in the ring and I will do the best that I can and that’s it.”

“All the fighters here are the best in the world and I respect Ky Hollenbeck very much, I know him. I respect him very much. I don’t want to say anything more than that,” he said of his opponent.

“I think I started later so I am the oldest year, but if you look at how many fights they all have (on their records) its similar. I feel confident so, we will see.”

“Yeah it’s amazing. I watched Albert [Kraus] and [Giorgio] Petrosyan for inspiration so it’s a dream come true for me. And it’s a chance to prove that I am one of the best as well.

“Nobody is unbeatable – apart from Petrosyan. Ha! No, everyone can be beaten. I take every fight as it comes. I came in to the competition early and I only had a week to prepare so nobody has seen me at my best yet.”

“If I win my fight and Giorgio wins his, we will meet in the semi-finals. That really wouldn’t make me feel good because Giorgio is a very close friend for me, like my brother. I really don’t want to have to fight Giorgio but, we will see. And Albert Kraus is also a good friend, we trained together many times. Possibly we meet in the final. I hope not but, business is business eh?”

“I come from full-contact karate, Ashihara. It’s a strong style, a hard sport. So for me it’s not so difficult to fight in kickboxing, I am experienced and I had many hard fights in karate. It’s all about heart.”

“Are America‘s hopes pinned on me? You could say that. But it’s all about me right now. I’m just going to concentrate on me and doing my best and hopefully that represents my country well.”

“Petrosyan is the number one in the world but I honestly think I have the perfect style to beat him. He is very technical and very orthodox, he often seems to know what someone is going to do before they do it. But everyone says I am very awkward and very difficult to prepare for because I am so unpredictable. I never know what I am going to do next until I do it, so Petrosyan won’t either. I am going to take him out of his comfort zone.”

“I’m going to be honest – this is the first time for me at this level. I haven’t been fighting for a long time so this is a dream come true for me at young age. I’ve been watching these guys since I was a kid, for inspiration and everything. I was ten when Albert won the K1 MAX and I am just really happy. I just hope it opens doors for me.

“If I won the $300,000 grand prize money I would try to be an adult, make investments. Put it into an apartment and try to make the money grow.

“I am a bit nervous but nerves keep you sharp. I hope it will be a good fight and that I will get the best out of my technique.”

“Who do I want to fight? Everybody.”

The ‘Final 8’ fight card will also include two tournament reserve matches to determine replacements should any of the main tournament fighters be injured and unable to progress to the next round.

In the first, Yoshihiro Sato (49-18, 20 KO’s) of Japan will face Dzhabar Askerov (73-28-1, 37 KO’s) of Russia. Sato was narrowly defeated by Beqiri in the Final 16 stage of the tournament in Sweden earlier this year while Askerov was eliminated by Van Roosmalen after three absolutely furious rounds in which they gave each other hell.

In the second, the outstanding French talent Fabio Pinca (85-17-4, 32 KO’s) will re-enter the fray after being eliminated in Sweden by Petrosyan. Superbly technical but flamboyant with it, he faces the rising Italian talent Alessandero Campagna (29-5, 14 KO’s) in what will be the hardest test of the young fighter’s burgeoning career.