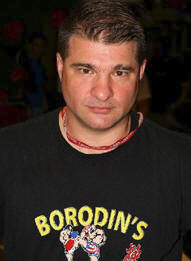 Legendary Thai fighter and trainer to be inducted into first class of honorees!

Vladimir is the head instructor at the famed Boridin’s Gym in Brooklyn, New
York.

He was born in Odessa in the Ukraine, Russia. He has competed in over 250
contests and was a national champion of the Ukraine. He was a five time Soviet
army champion.

He was presented with his Kru at the Master Pimu camp in Bangkok, Thailand

long
after starting with Grandmaster Thom Harnick of Holland and continuing his
studies with Arjarn Tony Moore, Kru Vtali Rykov of Russia, Hadj Bettahar of
France and Marco DeCesaris of Italy.

He has organized many muay Thai tournaments and has been a multiple time
representative of US national muay Thai teams. He founded the first muay Thai
association in Russia.

He is a licensed muay Thai and kickboxing judge and referee with the New Jersey
State Athletic Control Board.
In that capacity, he has worked the first regulated professional rules Muay Thai
shows in the history of the State.