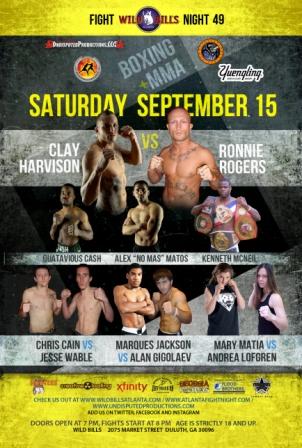 Next Saturday night, September 15, Wild Bill’s Fight Night returns its 49th show with boxing and MMA on the card! The combination of the two combat sports worked to perfection a few months ago entertaining the thousands in attendance with non-stop knockouts and submissions!

Now the two sports come back on Saturday, September 15 at Wild Bill’s!

The main event pits Atlanta fighter Clay Harvison vs South Carolina’s Ronnie “Bam Bam” Rogers. This should be an explosive main event with this being Harvison’s first fight in Atlanta after having 3 fights for the UFC and a member of The Ultimate Fighter tv show. Bam Bam Rogers is fighting for the 12th time at Wild Bill’s – more than any other fighter in the history of Wild Bill’s. The South Carolina native has beaten many of Atlanta’s best fighters and has become popular for his trademarked pink shorts.

Doors open at 7 pm and the fights begin at 8 pm.

Tickets are available at all Ticketmaster locations or online by clicking HERE.

Full fight card is below:

This entry was posted in Events and tagged CLAY HARVISON VS RONNIE "BAM BAM" ROGERS!, featured, MMA AND BOXING TOGETHER IN ONE NIGHT, WILD BILL'S FIGHT NIGHT #49. Bookmark the permalink.