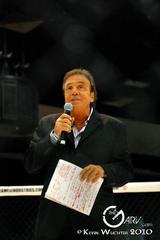 On December 7th, Louis Neglia will be inducted into the first class of honorees.
Neglia will be awarded with a Lifetime Achievement honor.

He starred in four martial arts related motion pictures (“A Hard Way to
Die”,”Super Weapon”,”Fist of Fear”,and “One Down”, “Two To Go”).

Many New Jersey fighters have competed on his Combat at the Capitale shows held
in New York City.

He has promoted over fifty professional and amateur mixed martial arts events in
New Jersey. He has also held about as many kickboxing cards in this State.

He is most recognized for his long running professional mixed martial arts
promotion known as Ring of Combat. Every Ring of Combat subsequent to the first
show has been held in New Jersey.