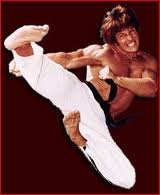 Martial Arts legend and Hall of Famer Joe Lewis passed away on August 31, 2012. Some of Joe Lewis’ accomplishments were United States Heavyweight Kickboxing Champion, World Heavyweight Karate Champion, and United States National Black Belt Kata Champion. In July 2011, he was diagnosed with a malignant brain tumor. Doctors told him that if he did nothing, he’d have six to eight weeks to live. On July 18, surgeons removed the tumor. “He had the best doctors, and they think they did a good job of getting it all out,” said Dennis Nackord, Lewis’ senior black belt.
Lewis died one year and forty-five days later, on the morning of August 31, 2012.