Moxon’s dynamite-like power in both hands combined with the tremendous amount of forward pressure he puts on opponents while looking for the finish from the opening bell, have been the key factors behind his repeated, highlight-reel worthy finishes. 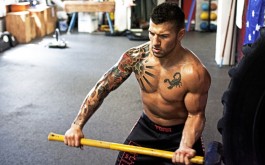 “I am honoured that GLORY has taken notice of my fights and has called me up to the big show to compete amongst the greatest caliber of competition in the sport of kickboxing,” said Moxon. “I am going to show the world that Stone Cold is the real deal and can thrive in the deepest of waters.

“Steve has been thrilling fans in Australia with his aggressive style and phenomenal power and has earned the opportunity to fight on the biggest kickboxing stage in the world,” says Marcus Luer, Managing Director of GLORY. “We think Steve has the potential to be a huge hit with fight fans worldwide. He will have a series of very tough tests ahead of him in GLORY, so we can definitely expect to see some wars.”

Among his key victories to date are wins over Ray Sefo protégé Jordan Tai and well-known Australian fighter and The Contender: Asia reality series competitor Bruce Macfie. . Having climbed to the top of the Oceania rankings, Moxon has now earned a chance to test himself against the international elite that make up the GLORY World Series lightweight division.