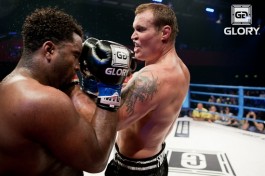 World No.1 ranked heavyweight Semmy Schilt of The Netherlands tops the list and is joined by legendary icons Remy Bonjasky of Suriname, Peter Aerts of The Netherlands and Jerome LeBanner of France as well as decorated champions Errol Zimmerman of Curacao, Gokhan Saki of Turkey, Sergei Kharitonov of Russia and rising stars Filip Verlinden of Belgium, Ismael Londt of The Netherlands and Suriname, Braddock Silva of Brazil, Brice Guidon of France, Jamal Ben Saddik of Morocco and Igor Jurkovic of Croatia.

The nearly complete tournament field marks an unprecedented assembly of the world’s most outstanding kickboxing talent. The three fighters who will fill the remaining spots in the tournament draw will be announced soon, with Japanese fighters expected in the line-up.

The December date and Tokyo venue for the event will also be announced soon.

Only fighters in the upper echelon of the stand-up fighting world were invited and their names underline GLORY’s position as the world’s No. 1 kickboxing league. Never in the history of the sport has there been such a convention of top-ranked fighters in a single night.

”We are thrilled to be able to bring such a high-caliber group of talent to Tokyo as part of our mission to usher in a new dynasty in stand-up fighting,” said Marcus Luer, Managing Director of GLORY World Series.

“GLORY is the premier league of kickboxing and the tournaments are open only to those fighters who have proved themselves to be worthy,” explained Cor Hemmers, kickboxing icon and GLORY ambassador.

“The fighters we have invited to the Grand Slam are either household names in the sport already or are the future Champions. They represent more than 10 nations spanning 4 continents”

“The fights will be spectacular and the tournament will be dramatic. The winner will be the unquestioned king of the heavyweight division.”

The Grand Slam event will debut a new tournament format devised by Hemmers. The sixteen fighters will battle it out over four stages in one night to determine an overall winner.

In order to make this possible, three of the stages will feature shorter rounds (two minutes instead of three) and there will be a ‘sudden death’ rule in the earlier stages which means a fight will be stopped before the third round commences if one of the fighters has been judged to win the preceding two rounds (Best of three format).

Full details of the new tournament format will be announced soon.