LAS VEGAS (May 8, 2012) – Undefeated 19-year-old prospect Guilherme Bertholdo (6-0), the nephew of UFC Middleweight Champion and pound-for-pound great Anderson Silva, will look to extend his perfect run in Muay Thai’s amateur ranks and move one step closer to turning professional when he faces off with Chris Lazaro (7-2) of Las Vegas, Nev. in a welterweight (147 pounds) matchup on the undercard of the Lion Fight Muay Thai VI: Schilling vs. Marcus II full-rules Muay Thai event at The Joint at Hard Rock Hotel & Casino on Saturday, May 12, live on LionFightPromotions.com.

“I am excited to finally test my skills against top level amateur opponents,” said Bertholdo, a member of Black House Team Nogueira, the famed training camp that is also home to Silva and is headed by MMA legends and twin brothers Antonio “Rodrigo” and Antonio “Rogerio” Nogueira in San Diego, Calif. where he trains under Kru (trainer) Alex Palma. 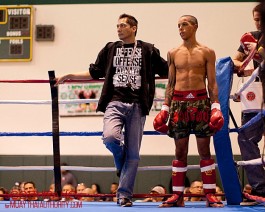 In Brazil, Bertholdo took up Karate and Brazilian Jiu-Jitsu at an early age before relocating to San Diego with his family. While his father has schooled him Brazilian Jiu-Jitsu and helped Bertholdo attain the rank of purple belt in the submission fighting discipline, Bertholdo has gravitated to the sport of Muay Thai due to his love for kicking and punching.

“Striking is my passion,” he said. “My Kru (trainer) has really taught me to use my hands and angles and, because of this, I’ve learned to appreciate the beauty of Muay Thai. MMA is a sport that I eventually will focus on in the future but, for now, I want to sharpen my striking and compete in an all-striking sport.”

Bertholdo said he is knocking on the door of gaining his United States citizenship and would like to eventually represent America as a member of the U.S. National Muay Thai Team.

“I am learning from my senior (training partners) how to conduct myself and perform like a true fighter, I am not attending college. Black House Team Nogueira is my college.”

Bertholdo’s opponent, Lazaro, is a 24-year-old member of Hard Knocks Muay Thai gym and student of Renzo Asparria, whom Lazaro has been training with for the last two years. The matchup with Bertholdo will be Lazaro’s first since he sustained a broken thumb during training last year.

“I love this sport and I’ve been eagerly waiting to get back in the ring. That time has come now that I’m healed up and I’m looking forward to putting on a great show,” said Lazaro, a technical fighter known for staying in the pocket with his opponent and throwing hard uppercuts.

Reserved ticket seats for Lion Fight Muay Thai VI: Schilling vs. Marcus II, priced from $45, are on sale at the Hard Rock Hotel and Casino box office, all Ticketmaster outlets (800-745-3000) and online at Ticketmaster.com.

Doors at The Joint open at 4 p.m. and the first preliminary bout will begin at 5 p.m.

The live stream of the 12-bout card, which will be facilitated by Go Fight Live, will begin at 8 p.m. ET/5 p.m. PT on LionFightPromotions.com and can be purchased for a one-time credit card charge of $14.99.

In the highly-anticipated main event, WBC Light Heavyweight (175 pounds) Champion Joe “Stitch ‘Em Up” Schilling (12-2, 10 KO’s) of Los Angeles, Calif. will face off with undefeated top contender and bitter rival Simon Marcus (23-0, 18 KO’s) of Toronto, Ontario Canada in a grudge rematch after their first meeting on Feb. 25 ended in a controversial first-round TKO in Marcus’ favor.

In a matchup of two experienced, Las Vegas-based MMA competitors who have decided to test their combative skills in the Muay Thai ring for the first time in their respective careers, Javier Torres (0-0) will square off with Michael Madrid (0-0) in a 170 pound catchweight fight.