Take On Productions “Muay Thai at the Mecca” Weigh-In Photos

By Eric Rivera
Once again I find myself in the concrete jungle of New York City to cover yet another Take On Productions event. However, this event is unlike any other Take On event that I have covered. It will be the first time that Take On, or any Muay Thai promotion in the world for that matter, will present a Muay Thai event at Madison Square Garden. New York City is an imposing city in its own right but entering Madison Square Garden, with its years of previous sporting and entertainment events, has made the sport of Muay Thai even more electric. Needless to say, I am incredibly excited to be a part of this event. It truly is a testament to the growth of Muay Thai in America, when after years of being relegated to smaller venues and little coverage, Muay Thai has finally made it to one of the worlds largest venues such as Madison Square Garden. The official weigh ins for the “Muay Thai at the Mecca” event took place just minutes after the official press conference for the Sergio Martinez vs Matt Macklin world title boxing match had wrapped up. It was a great highlight in my young career as a member of the “Muay Thai media.” At this time, after the conference, droves of high level boxing and sports reporters approached me to ask what was going on. My answer to their inquiry was simple, “Muay Thai has arrived at Madison Square Garden”. They seemed more than content to learn about the sport and watch the fighters weigh in and face off. Not only were they intrigued, but they seemed excited to learn more about what was going on. This definitely marks yet another monumental step for Muay Thai in the United States. Below are the pictures I snapped at tonight’s weigh-ins.
NOTE: Remember that you can catch the event live on Internet PPV by purchasing the stream here on GFL.tv!
Weigh In Photos
Pictures by Steve Ferdman:

A volley of kicks and punches were unleashed as fights broke out on the Bowery on Friday night. But it wasn’t what you think. More than 500 people had descended on the lavish Beaux Arts building, that once housed the Bowery Savings Bank, to watch “Combat at the Capitale”. Presented by Lou Neglia, a three-time champion of the World Kickboxing Association, the night showcased some of the top kickboxers from gyms in New York City and beyond.

One title contender, Julio Arce, got his title shot on Friday night and made the most of it. Challenging Tim Amorim, the WKA’s incumbent amateur World Muay Thai champion in the Light Welterweight Division, Mr. Arce was unanimously judged to be the victor, after a spirited five-round title bout, that capped off the night’s festivities. Representing the Tiger Schulman Mixed Martial Arts Academy in Bayside, Queens, Mr. Acre smiled while being awarded the title belt. He appreciated the crowd as they cheered him on.

Excerpt from:
‘Combat at the Capitale’ Brings a Bit of Bangkok to the Bowery
By EVAN BLEIER, 20 Cooper Square 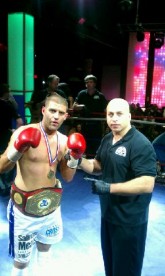 Bobby Cambell, fighting out of Bellmore Kickboxing/MMA, won the WKA World Super Lightweight Title by unanimous decision. He defeated Michael Johnson who faught out of the Spartan Gym in England. 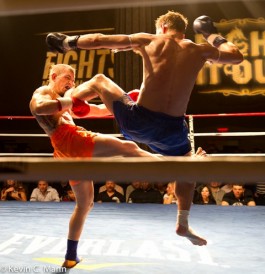 Despite losing a close decision, Josh Sampo pressed the action throughout his match against Ognjen Topic on the Co-Main event of FridayNight Fights Muay Thai’s March 9th card.

St Louis’ Josh Sampo pressed the action throughout all 5 rounds of his match with Ognjen Topic. Both fighters gave as well as they got, but it was Ognjen’s technical prowess that delivered the victory. 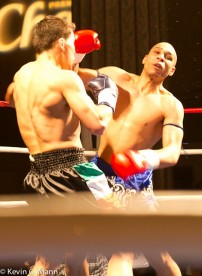 Las Vegas’ Yarborough met Joe Valtellini in the evening’s main event. Yarborough, had never been stopped as a professional, and was unable to get through round 1, of their scheduled 5 round match.