This comes to us from the Tameside Advertiser in Manchester, England. It was originally published on December 29, 2011. 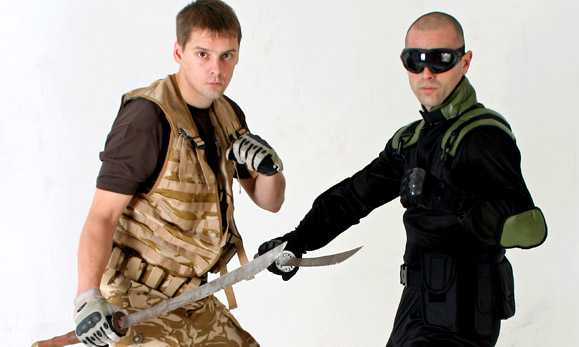 A Thai Boxing duo have manged to fight their way onto the big screen.

Carl Johnson and Joel Yarwood found themselves out of the ring and on the red carpet after featuring in a brand new short film called “Last”.

The 10-minute short, made by Lion Mountain Entertainment, remiered at London’s Canary Wharf and hopes to make waves on the short circuit festivals, including in Cannes and New York.

Carl, a 32 year old accountant by day , has been Thaiboxing for 16 years and jumped at the chance to star as the film’s hero.

Carl, of Limehurst Farm, said: “Last August we got a call from a film company looking to do a short film which involved a fight scene with swords.

“They has seen our fight videos online and thought we looked pretty good.

Both men train at the Sitsiam Thai boxing school, based at the Portland Mill in Ashton, and are highly skilled a fighting with swords and other weapons including staffs and spears.

Carl said: “When we war first approached I thought we were being wound up but I found it all really interesting.

“We do demos on a regular basis but to do a film was quite different for us.

“The premise of the film is that the entire human race has been wiped out apart from me and it’s my missing to get the message out to the rise of the universe.

though both fighters enjoyed the experience, Carl has ruled out a life on film.

He Said:”There was a bit of acting involved but no speaking. I would have enjoyed it, but I’ve go the most boring voice in the world.

“I think I’m a martial artist first, rather than an actor.”