Saturday March 10th saw the 4th installment of the Challenger Fight Series – ‘Devastation’. The event was hosted at the beautiful Deerfoot Inn and Casino. The event was historic as it was the first time in North American history that there were PAMU (Pan American MuayThai Union) title at stake. The event was supported by IFMA, sanctioned by PAMU, MuayThai Alberta and the Canadian MuayThai Council – Amateur.

The show was sold out the day before the event was to take place. Following the success of the prior show on January 28th, many people were again turned away at the door for this event. The fights were very entertaining and featured some real good technical fights.

Before the event was to start, promoter Mike Miles was to receive some distressing news. “I received a phone call that my boy had an accident and was in the hospital. This changed all the dynamics of the night for me. I truly wanted to leave and figure out what had happened. I lost all focus and unfortunately that night it really showed. I thank Scott Clark, Sandra Bastian, Erik Lollike and Jason Jillain for trying to keep the team focused”, said Mike Miles. The event still featured some world class MuayThai and the bouts went off without a hitch.

Pan American Lightmiddleweight MuayThai Title
Peter Arbeau (Canada/Miles, Clark) vs. Marcos Denis Pereira (Brazil/Camacho)
This was the crowd’s favorite bout of the evening. Arbeau has developed a huge and loyal following of fans in Calgary. Arbeau was not to disappoint and put on a good show. Brazil’s Marcos Pereira was presented with a great opportunity in this bout. He was main event and up for grabs was the PAMU Lightmiddleweight MuayThai Belt. Unfortunately for Marcos, his opponent Canada’s Arbeau was well prepared for this event and hungry for the win as well. Pereira just could not get going effectively in this fight. He tried to mount a good offense but it just never seemed to materialize. Every time Pereira moved, he was greeted by an onslaught of punches, kicks, elbows, and knees during this bout. Arbeau delivered an assault of both offensive and defensive blows which kept Pereira off balance and out of the running on this bout. During the bout Pereira attempted several cartwheels (a la Saenchai) but they were done without his hands touching the ground (aerial cartwheels). They were close but never connected with the Canadian. From round one to round five, Arbeau pressed the fight and for every attack that the Brazlian mounted, Arbeau was to counter and land. Arbeau was to take the bout by unanimous decision. Congratulations to Peter Arbeau on winning the PAMU Lightwelterweight MuayThai Title. 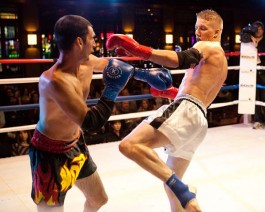 Pan American Lightwelterweight MuayThai Title
Hakeem Dawodu (Canada/Miles, Clark, Lollike) vs. Sebastian Calvo (Argentina/Carpinacci)
Both athletes weighed in the night before with Dawodu (138 lbs.) only three pounds heavier than Calvo (135 lbs.). But on fight night, Dawodu was to look visually bigger than his foe. As the bout opened both athletes circled each other. Dawodu was to land the first blow with a jumping teep that sunk into Calvo’s stomach. Calvo was to smile back after the kick. After that, the feeling out stage was over and though the first two rounds were somewhat slower in pace, both athletes started measuring each other and delivering quick shots at each other. But Dawodu’s speed and timing was to work in his favor as he was more successful landing his kicks and knees and avoiding the counters. Making the fight interesting, Calvo would counter with some fast and tricky moves but just could not seem to catch the Canadian. Dawodu pulled ahead in each round but midway through the fight was to take a picture perfect teep to the face sending a spray of sweat from his head across the ring. Undaunted, Dawodu started opening up more trying to go for the knockout. Calvo demonstrated why he is such a respected fighter and though Dawodu would land some good kicks and knees, Calvo did a good job of choking Dawodu’s punches out and nullifying Dawodu in the clinch. Though Dawodu was to win the bout and the title unanimously, and though the Canadian was not injured or marked up after the fight, Calvo’s experience made Dawodu work very hard for the win. “Calvo kept Dawodu very honest. Dawodu had to get his shots in and either block or defensively avoid Calvo’s fast counters. This was a very good fight for Dawodu. It has definitely helped Dawodu improve as an athlete,” said Canadian coach Mike Miles. This was quite possibly the fight of the night. Congratulations to Hakeem Dawodu on winning the PAMU Lightwelterweight MuayThai Title.

Pan American Cruiserweight MuayThai Title
Robert Thomas (Canada/Kew) vs. Geverson Bergamo (Brazil/Camacho)
There was plenty of action in this bout. Thomas was to use his right hand to plenty of effect. Thomas was to make good use of his boxing skills and kicks on the outside during this bout. Bergamo never really seemed to want to punch but instead relied on the clinch and being close. Several times he grabbed Thomas’ head and delivered multiple knees to the face but they did not have the strength to affect the Canadian. Both athletes exchanged back and forth demonstrating great desire and skills in this bout. Thomas was to take the decision unanimously. A very good fight. Congratulations on Robert Thomas winning the PAMU Cruiserweight MuayThai Title.


Pan American Women’s Lightwelterweight MuayThai Title
Nicci Soutiere (Canada/Miles, Clark, Lollike) vs. Ruth Aquino (Argentina/Carpinacci)
This was a real war between these two athletes. There was fast and furious exchanges between these two athletes. Soutiere worked on using her kicks and long knees to effect on Aquino. Aquino relied on fast boxing combinations and low kicks during this bout. In the clinch Soutiere appeared to have the upper hand but as the rounds went by, it was more difficult for Soutiere to knee as effectively as she did at the start of the bout. Aquino was to deliver a lot of knees to the legs during the clinches while Soutiere relied on kneeing the belly. Towards the end of the fight as Aquino would advance she would walk into long knees and long teeps from Soutiere. During several exchanges which took place on the ropes, Aquino was to land some fast boxing combinations. At the end of the bout, the result went to the score cards. Souritere was to win by a split decision. “I felt the bout was very close and looking at the bout, Aquino landed some good punch combinations but Soutiere was to land some excellent body kicks and long knees”, said Mike Miles. These two could possibly meet again in the World Championships in Russia this year. Congratulations to Nicci Soutiere on winning the PAMU Women’s Lightwelterweight MuayThai Title.

Canadian Superwelterweight MuayThai Title
Phil Leier (Calgary/Miles, Clark, Sutherland-Kolozetti) vs. Matthew Kendall (Pickering/Geeverghese)
This was a good technical bout with both athletes demonstrating some excellent skills. As the bout opened both looked quite respectful towards each other as each probed with long kicks and punches. In rounds one and two Leier looked calm and relaxed and kept Kendall at bay while landing some good kicks. In round three Kendall landed a punch which slightly shook Leier. Upon seeing this Kendall changed his battle plan and decided to switch his attacks to using his hands. He was in the remaining rounds moving forward pressing the fight and trying to land his punches for a knock out. Leier was to take some punches but he was never shook after the punch in the third round. Going into the final round the score was neck and neck. Kendall knew this and he came out fast and furious with pressure on Leier. Leier was to fight back defensively and score but Kendall showed the ring generalship pressing forward and taking the round. At the end of the bout, Kendall was to have his hand raised for an unanimous decision. Congratulations on Matthew Kendall wining the Canadian Superwelterweight MuayThai Title.

Featherweight MuayThai Fight
Max Carruthers (Calgary/Miles, Clark, Bastian) vs. Anton Potocki (Cambridge/Kew)
“I personally felt that this was the bout of the evening”, said Calgary coach Mike Miles. The two youngsters displayed nice clean technique with the action see-sawing back and forth between the two throughout the whole bout. A lot of the fight was in the clinch and Potocki did manage some good moves on the inside, though Carruthers was never outclassed in this position. Carruthers seemed to decide in this bout to punch more than he usually does and Potocki was to sit on the outside and kick and work hard inside in the clinch. Both athletes pitched each other to the canvas during the clinch. Potocki was to take the fight unanimously but the bout was very close. These two have huge futures in front of them on the Canadian scene. Great fight! Congratulations to Anton Potocki on his win in this event.

Superwelterweight MuayThai Fight
Dwain Soon (Calgary/Miles, Jillain, Clark) vs. Jason Hinds (Pickering/Geevershese)
This was an interesting bout. Truthfully at times, the bout looked more like a MMA contest. Hinds was to dance around the ring firing long punches the majority of which did not find their mark. Hinds was to move around sticking his tongue out and mugging at Soon. The problem with Soon is that he blocked the majority of the attacks of Hinds and Soon did land counter attacks. But as the rounds wore on, Soon stood and waited too long not pressing the bout enough. The judges felt that Hinds had thrown and carried the fight giving the bout to the Pickering athlete. Congratulations to Jason Hinds on winning the unanimous decision.

Exhibition Match
John Huk (Calgary/Miles) vs. Sterling Love (Calgary/Han)
The morning of the fight event, scheduled athlete Mohammad Shah (Calgary/Miles) did not pass his physical to compete. This left Love without an opponent. One hour before the event was to start, John Huk was to step up and take the bout. Love’s coach decided that the bout would be an exhibition match. The two athletes in the opening bout of the evening, slugged it out for the audience.