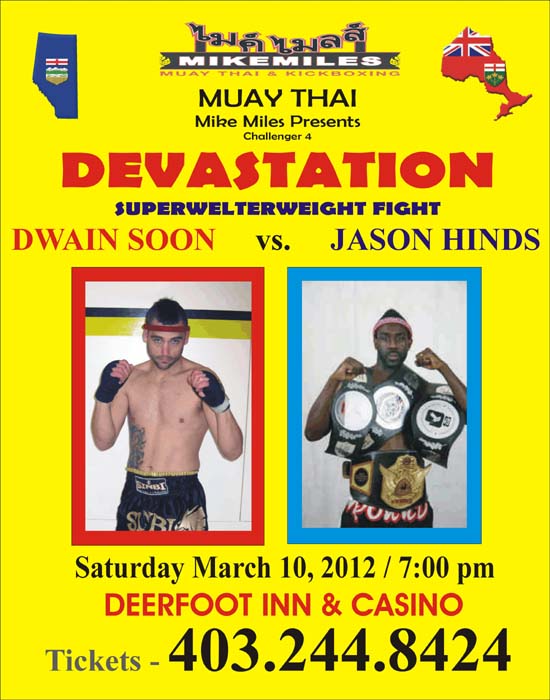 Dwain ‘Machine’ Soon gets his chance to fight in Calgary on DEVASTATION. Trained by Ajarn Mike Miles and Kru Yai Scott Clark (Mike Miles MuayThai and Kickboxing Ltd.), Soon originally was to fight on the ultra successful JAWBREAKER event in January. Unfortunately his American opponent was deported before the bout could take place. But on DEVASTATION his opponent will be here taking the fight to Soon.
His opponent…
Pickering athlete and owner of 4 Title Belts, the most recent being won in 2011, Jason ‘Mad Hatter’ Hinds is excited to be in Calgary and promises a win for his camp (POUND for POUND MMA) as well as for his province (Ontario).

Both athletes are excited about fighting each other and on March 10th, this will be an exciting, action packed, and heated battle on the under card bouts of DEVASTATION! Spectators will enjoy the passion these athletes bring to MuayThai within Canada.

For the first time in history, IFMA, PAMU and MUAYTHAI ALBERTA feature 4 PAMU MuayThai Belts on the line. Champions from Canada, Brazil and Argentina take part in this historic event.
PAMU TITLE BELTS

Arbeau is the current WKL World Lightmiddleweight MuayThai Champion. He steps up against 4 time South American Muaythai Champion (2008,2009,2010 and 2011) Denis!

Also check out the video Promo