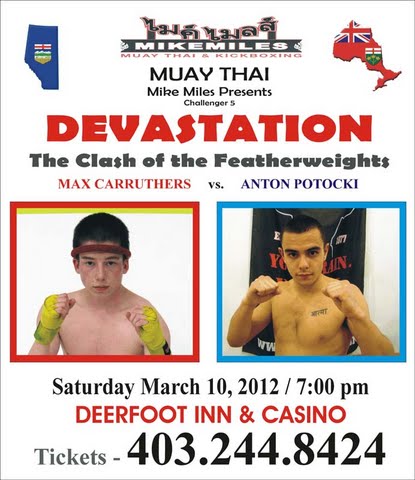 The Clash of the Canadian Featherweights. That is how this bout between two of Canada’s top Featherweights will pan out. Ontario vs. Alberta!

Calgary’s young up and coming athlete ‘Super’ Max Carruthers prepares for the hardest bout of his career. Trained by Ajarn Mike Miles, Kru Yai Scott Clark and Kru Eakkachai, and hailing from the well known Mike Miles MuayThai Camp (Khaay SitKraitus), Max puts it on the line against one of Canada’s best featherweights.

Across the ring facing him will be…

Cambridge’s young and experienced athlete Anton Potocki who hails from MAS Academy of Martial Arts. The Mas Camp is hailed as one of the best MuayThai camps in Canada under the tutelage of Kru Chris Kew. Having battled internationally, Potocki comes to Calgary to defeat Carruthers and put himself in line for a Canadian title shot.

Neither athlete has been one to shy away from fighting anyone and on March 10th, the sparks will fly in this under card bout! Spectators will witness the future of MuayThai within Canada.

For the first time in history, IFMA, PAMU and MUAYTHAI ALBERTA feature 4 PAMU MuayThai Belts on the line. Champions from Canada, Brazil and Argentina take part in this historic event.
PAMU TITLE BELTS

Arbeau is the current WKL World Lightmiddleweight MuayThai Champion. He steps up against 4 time South American Muaythai Champion (2008,2009,2010 and 2011) Denis!

This is an 18 plus event