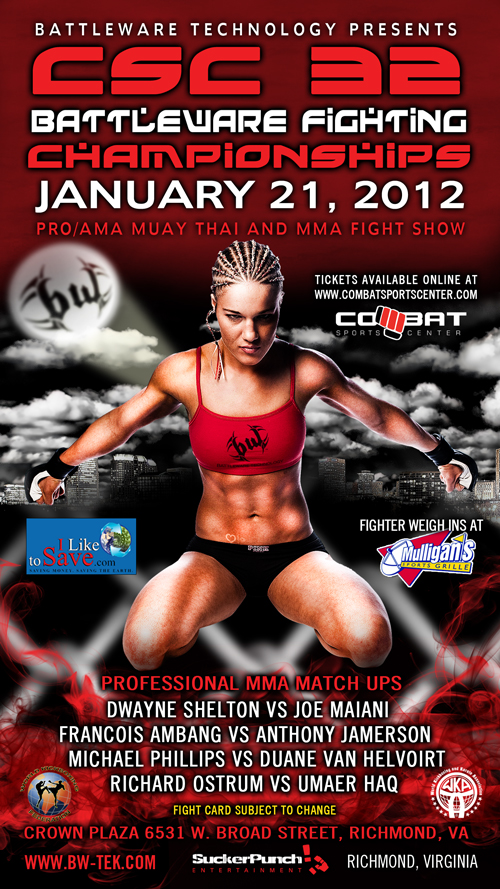 CSC 32 – Battleware Fighting Championships, which was sanctioned by the WKA USA, had a “sell out” crowd at their show (Jan. 21, 2012) in the Crowne Plaza Richmond – West Ballroom. The show featured professional MMA and amateur Muay Thai matches. The new venue proved well for CSC promoters who packed the house, with a “sell out’ crowd. The CSC fight show is know for its diverse cards and competitive match ups, with the CSC 32 hitting the mark on both accounts. Main card featured one WKA amateur Virginia State title and one WKA US amateur Muay Thai title matches and 4 Professional MMA matches.

A full under card of top level amateur Muay Thai was highlighted by the second round KO by Brian Butler, who also happens to be the president and CEO of Sucker Punch Ent, one of the top fighter management companies in the industry. The KO brought Butler KO-of-the-night honors for CSC 32. Perhaps the “technician” of the night honors should go to Ani Hilditch for her win over Robin Reese to take the WKA Virginia State title. The much anticipated WKA US title defense between the title holder Brandon Mickens and Carlos Lopez was a tactical battle with both fighters trying to maneuver into the best range for their skill set. In the end it was Lopez who ended up ahead on the score cards and taking the US title belt.

The Professional card was kicked off by a match from two popular Virginia based gyms, Umaer Haq (MiKiKo MMA) and Richard Ostrum (Global Martial Arts). Both fighters came in great shape figuring they were in for a war, but Haq was able catch Ostrum with an armbar at 2:00 of the first round. In the second Pro MMA match Duane van Helvoirt out of Calamaro Gym/ Gracie Barra Holland and training out of Combat Sports Center scored a quick reverse triangle win at :55 of the first round over rough and tough Joe Maiani from Team Genocide. The first match of the co-main event featured former kickboxer and local favorite Fancois Ambang (Total Victory MMA) and hard hitting Anthony Jamisom (S&S Boxing). Jamison came out hard and seemed in control, but ultimately got stopped with a rear naked choke at 2:10 in the second round. The main event brought in experienced Ryan McIntosh (Juggernaut MMA) to face long time RVA fighter Dwayne Shelton (Combat Sports Center). Both fighters came out swinging looking to the early KO. McIntosh, feeling the pressure in the stand up game, looked to take Shelton to the ground. However, Shelton edged out McIntosh on the ground as well and ended up with the submission win at 3:57 in the first round.

CSC 33 – Battleware Fighting Championships will follow up with another Pro/ama show at the Crowne PLaza Richmond – West in RVA on May 26, 2012. The show will feature both professional and amateur match ups in MMA and Muay Thai.